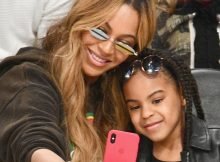 OK, so not really twins, but there is definitely a powerful mini-me vibe unfolding here. In fact, even Beyoncé can’t believe how much she and Blue Ivy look alike. The Force is strong with these two. Not that we’re saying that Blue Ivy is Beyoncé version 2.0 — clearly the kid has got her very own huge personality — but damn, just look at this latest side-by-side of Bey and Blue:

Someone made this comparison of me at age 7 and Blue at age 7. My baby is growing up. ?

I mean, come on. Those eyes! That smile! The adorable curls! Queen Bey shared the photos on Instagram on Thursday.

“Someone made this comparison of me at age 7 and Blue at age 7,” Beyoncé wrote as the caption. “My baby is growing up.”

And we love that this mother-and-daughter pair have got each other’s backs when it comes to fashion and full-length snapshots. Beyoncé gave her daughter special photo cred on another batch of photos on Instagram: “B.IV.”

Beyoncé and Blue Ivy spend a lot of quality time together doing cool stuff like hanging at NBA games with Grandma Tina Knowles (Beyoncé’s mom) and taking in powerful speeches at swanky award shows (like the famous moment when Blue Ivy shushed her rowdy mom and dad, Jay-Z, at the Grammys for being way too extra at the wrong moment):

Hey, that Twitter user is not wrong about the royalty bit. Queen Bey and King Jay-Z are about as royal as we’ve got here in the U.S. England, you can keep William and Kate and Harry and Meghan and their progeny. We’re not even mad. We’re pretty sure Princess Blue Ivy could out-royal Princess Charlotte any old day. And we’d venture a guess that Sir and Rumi are working on their royal swag behind the scenes too.