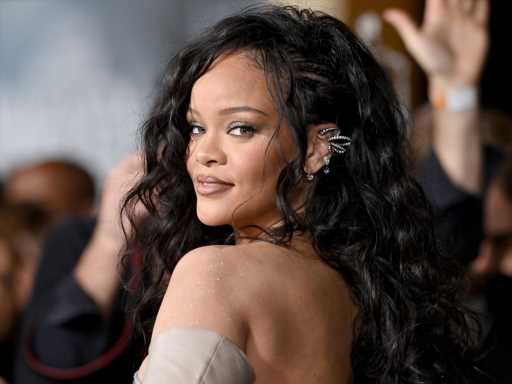 There are some rather weird things that happen when a woman becomes a mother, like postpartum hair loss and getting used to the new shape of post-baby boobs, but for Rihanna, one of the very weirdest things she’s experienced since giving birth to her son in May has nothing to do with him, but rather her own mother.

In an interview with E! News, correspondent Justin Sylvester asked the new mom, “I feel like when people have kids, they turn into their parents — have you caught yourself turning into your parents yet?”

With wide eyes and a hand over her mouth, Rihanna asks, “Wait, that’s a thing? Wait, it’s a real thing?” With hysterical disbelief in her tone, she said, “Honestly, it happened to me!”

She went on to share, “It is weird! Even the little things that annoy me about her, I do it. I literally make all of the same faces. I say the same things. I clear my throat the same way. I move my mouth the same way, and it’s, like, weird!”

The entertainment and business mogul added, “I either never noticed it or it never happened until I had a baby, but it is weird, and it is happening.” She said with faux horror, “I’m literally becoming my mom.”

Sylvester playfully asked, “Was your mom this snatched?” Rihanna hilariously responded, “Oh, she more snatched than me right now, honey. She puttin’ me to bed right now.”

She’s ready to get back to her best now that her baby boy is earth-side, explaining, “Once you get to the other side [of pregnancy], you’re like, ‘I gotta get back.’ There’s something that just happens.” Less than five months since becoming a mom, she’s released a long-awaited single, launched a new sport line under her Savage x Fenty label, and announced her role as the 2023 Super Bowl half-time performer — it’s fair to say she’s well on her way to getting “back,” and we can’t wait to see what’s yet to come.

Before you go, check out these celebrity moms who revealed their pregnancies in some awesome ways.