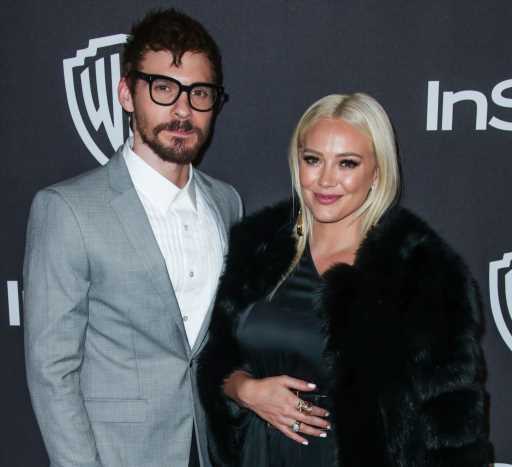 It’s no surprise that Hilary Duff and Matthew Koma make adorable babies. Just look at these sweet fall photos of Mae James, now 8 months old! Duff also has daughter Banks, 3, with Koma, as well as Luca, 9, with ex Mike Comrie. So, can you blame fans for hoping that the married couple has another baby soon?

Last night, Duff posted a selfie of her and Koma sitting on a plane on Instagram, turned toward each other with Duff closing her eyes. After she wrote, “Leaving for a little bit…the 3 of us” with a smiley face, fans exploded with speculation: “Not me thinking this was a pregnancy announcement,” “PREGNANT AGAIN?! YASSSSSSS!” and “Congrats!” were posted among other comments.

Unfortunately for fans, Duff was not posting a pregnancy announcement. Koma swooped in to clarify the situation, writing, “@stephanjenkins where you at” and “She’s talking about @stephanjenkins sitting behind us you baby crazies,” referring to the Third Eye Blind musician Stephan Jenkins who can be seen sitting behind the couple.

Later, Koma posted his own selfie of the couple after they landed, with the caption, “just the three of us (stephan’s version)” and tagging their location as “It’s just a joke.” Commenters were quick to laugh, writing, “Calling out the ‘baby crazies’ then posting for the ‘baby crazies,’” and others saying Koma is “always a troll.”

We love that her husband is weighing in on the pregnancy speculation! This isn’t the first time the two have joked about having another baby. On Aug. 31, Koma posted a funny picture of Duff holding newborn Mae (and giving him a look) with the caption, “One of my favorite pictures of wifey somewhere between supremely fulfilled, exhausted, and why the f–k are you taking my photo. She started her new show this week and it’s so rad watching her kick into that mode. It’s easy to forget when she’s nailing it as a mama bear, wife, family psychologist and chicken lady, that she was first an absolute ace at what she was born to do. A really f–king cool magic trick. This show is gonna be epic.” This was followed by a summary of her Subway order “to keep her grounded.” At the time, Duff commented, “Oh you’re gunna get it. This is bound to get him baby No. 4 and Subway night 3 tonight.”

Their sense of humor is great — we love how they joke and interact with fans (even if we are secretly hoping they will have another baby one day!).