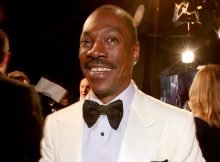 Who’s your daddy? If you’re not sure, you might want to check with Eddie Murphy.

The comedy legend, 57, has 10 kids — all of whom appear with him in a holiday photo posted by his daughter Bria Murphy on her Instagram. It’s the family’s very first photo all together. Check out this posse:

The Beverly Hills Cop actor and his fiancée, Paige Butcher, welcomed their second child on Nov. 30, a son named Charlie. The couple starred together in Big Momma’s House 2 back in 2006. The two also have daughter Izzy, 2, whom Murphy holds in the epic family photo.

In addition to Izzy and Charlie, the photo features some of Murphy’s baby mamas and all of his offspring. It’s an epic lineup for sure: Eric, 29, and Christian, 27, with their mom, Murphy’s ex-girlfriend Tamara Hood; five kids with ex-wife Nicole Mitchell Murphy — Bria, 28, Miles, 25, Shayne, 23, Zola, 18, and Bella, 16; and one daughter, Angel, 11, with the badass former Spice Girl Melanie Brown (that’s Scary Spice to you and me).

Brown was missing from the photo, recuperating in England from two broken ribs. But Angel is spending the holidays in the care of her dad. A source told Us Weekly, “Angel is very well cared for. Eddie and Angel have been spending a lot of time together in recent months.”

In case you missed all the tea, Brown and Murphy were together for nine months in 2006. When Brown originally revealed her pregnancy, Murphy refused to believe he was the father and demanded a paternity test. But no hard feelings!
“[Murphy’s] such a loving, caring, respectful person,” the America’s Got Talent judge told Steve Harvey in December on his talk show. “It took a while to get there because we broke up not in the happiest circumstances.”

We’re wondering how Murphy’s handling all the hubbub about his family Christmas photo, as the actor himself doesn’t even have any social media accounts — or a computer, for that matter (?!). “I don’t need to be on social media interacting with the fans, tweeting that I just ate strawberries,” Murphy told Hollywood Reporter’s Awards Chatter podcast last September. “I’m checking y’all out while y’all are doing it, but nothing has made me go ‘I wanna be on there with y’all, I just had strawberries too. I’m going to the store now. Look at this picture of this baby.’ I’m not doing none of that s***.”