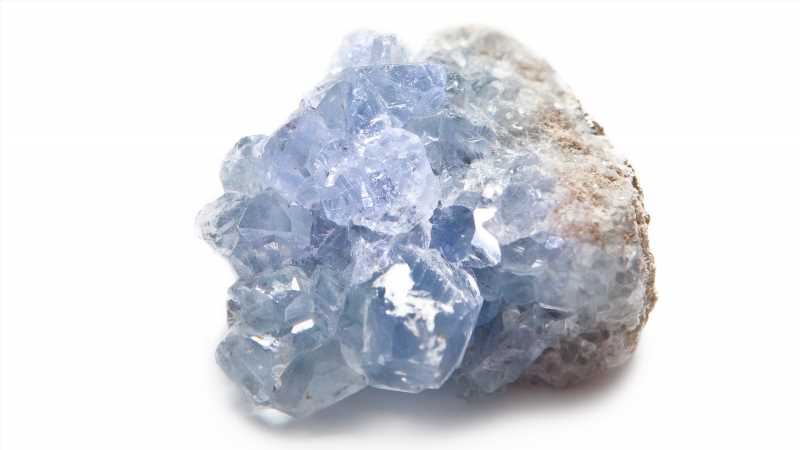 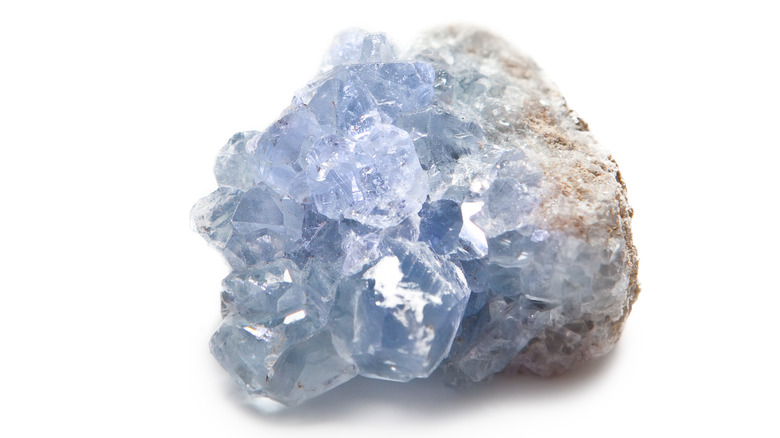 Whether you’re a modern mystic à la Stevie Nicks with an ever-present tarot card deck in hand, or you’re slowly getting into “otherworldly” practices now, crystal healing might be right up your alley. As per The Guardian, there’s a renewed interest in all things witchy, with more people looking toward the metaphysical to find their center and reconnect to nature. According to the outlet, global brands Aveda and Sisley have recently unveiled crystal-infused products, and celebrities and mere mortals alike have gotten on board with the power of gemstones. If you’re curious, you’re not alone.

According to Vogue Arabia, crystal healing is surging in popularity, with spiritual teacher Yogmitra explaining, “the theory is that our lives work in accordance with chakras, so we use crystals to help restore the balance.” With chakras being the Sanskrit word for the body’s “disks” of energy, each pertaining to different organs (via Healthline), it makes sense that crystals can help improve wellness. And it’s a time-honored tradition: as energy practitioner Keveney Avila told Oprah Daily, the ancient Greeks used crystals to guide war decisions, the ancient Egyptians carried gems to ward off negative vibes, and Chinese medicine regularly incorporates earth’s stones. Holistic health expert Amy Mecree further explained to the outlet, “our bodies are dynamic, electromagnetic organisms … crystals are a fun and unique way to help direct and influence that energy toward greater health.” While many of us already have some good old quartz on our dresser, lesser-known celestite can be just as effective. 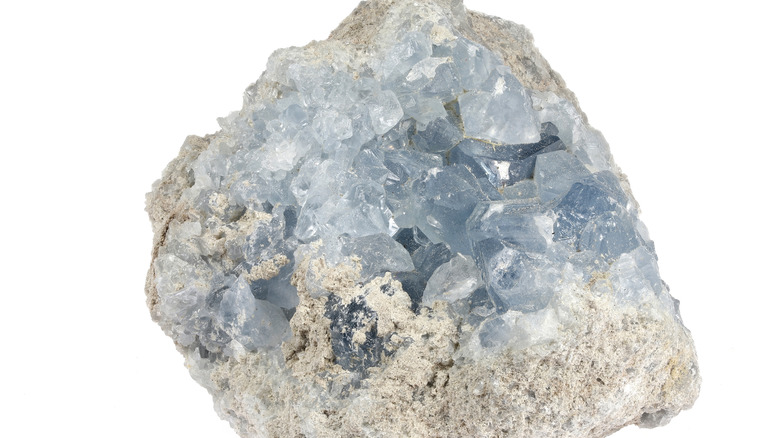 Celestite (also known as celestine) is used to connect to your spiritual, ethereal side — a stone that will put you in between nature and the otherworld, so to speak. As per Healing Crystals for You, celestite is used for divination purposes, to sharpen your intuition, and to put you in touch with the inexplicable. Tied to the word “celestial,” this crystal is connected to finding greater meaning and improving spiritual health (via Gemstagram). Via Energy Muse, this stone was discovered in 1791 and was coined “Zoelestine,” translating to “of the sky” in Greek. Eventually becoming the “celestite” we know today, the outlet explains that ancient legends connect this crystal to “wisdom of the ages,” the Pleiades star cluster, and the divine.

Per Healing Crystals for You, this gem is known for its baby-blue shade, but while it looks soft, it is all-powerful in making connections to the universe. If you feel burned out from your day-to-day subway commute, your city’s flashing lights, and the humdrum of your work schedule, you might make use of celestite’s awakening cosmic energy. Plus, according to Healing With Crystals, celestite has a naturally high vibration and will fill you with gentle positivity and serenity -– just like the calmest of oceans. If you ever feel overwhelmed by your environment, celestite can help you center yourself. This crystal can help heal your soul after trauma, rebuilding your emotional side while never hardening you to life’s joys. Moreover, it can help you communicate with spiritual beings and seek out guidance.

This crystal is a natural healer 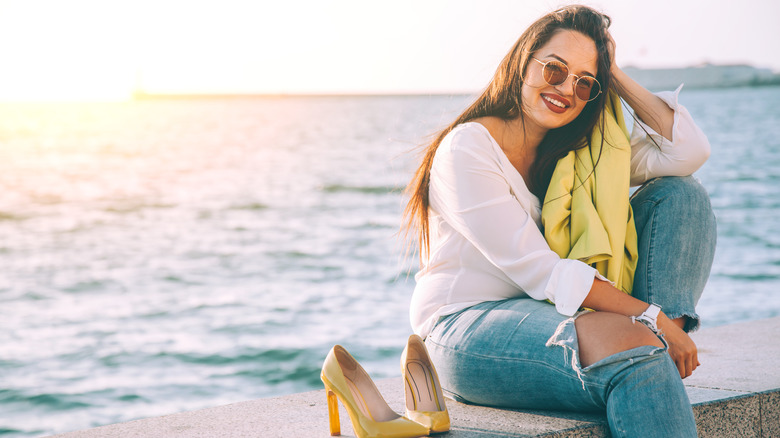 Apart from connecting you to the stars above, celestite works for grounded, within-the-body healing, too. This high-vibration crystal is used for increasing consciousness and can clarify your aura after a tumultuous time (via Healing With Crystals). If you ever feel disconnected from your body, celestite can help, bringing you a dose of positive energy. Per Psychology Today, this kind of bodily disconnection and reality detachment is related to anxiety, and even past trauma. While mindfulness and self-care are paramount for healing, holding onto your celestite and meditating can help you see the bright side of life.

As Healing With Crystals notes, celestite has clear mind-healing benefits. If you ever feel like you’re dragging yourself to work, drained from the outside world, or constantly worried, this crystal can help you feel calm. Celestite is an energy soother, allowing you to rest your mind when it’s going 100 miles per hour (many of us know the feeling all too well). Hold your celestite in your hand and imagine your mind like a blank space, a soothing river, or the blue sky above -– this crystal can help you feel relaxed and improve your quality of sleep (via Energy Muse).

According to Gemstagram, celestite has purging benefits, whether helping you let go of thoughts that keep you up at night or dissipating your tension. In short, it will eliminate negativity from your mind, allowing you to cut loose what no longer serves you in life.

Celestite and the chakras

Like all crystals, celestite works its energy vibrations directly on the body’s chakras, leading to healing of the mind, body, emotions, and spirit. As explained by Energy Muse, celestite works with three chakras in the body: the throat, third eye, and crown. Working with the highest chakras, celestite is unequivocally one of the best crystals for elevating your consciousness (via Healing Crystals for You).

According to Healing With Crystals, this light-blue stone works with the throat chakra to inspire you to speak your mind and even boost your creativity. My Stone Meaning agrees: The outlet counts celestite as a throat chakra healer, perfect for anyone looking to improve their social abilities, or be more honest with themselves and others. If you’ve ever felt like a fly on the wall at a party or feel tied up to your past, this crystal is all about liberation.

Similarly, celestite works with the third eye chakra, which can be found in the middle of the head and is linked to your spiritual side (via Healthline). This stone helps open up your third eye, increasing intuition (via Healing With Crystals). If you are going through a difficult situation or just hit a fork in the road and don’t know which way to turn, this crystal can help you see the light.

Lastly, as described by Healing Crystals For You, celestite works on the crown chakra, located at the top of the head, to connect you to the divine, spiritual realms.

Who should use celestite? 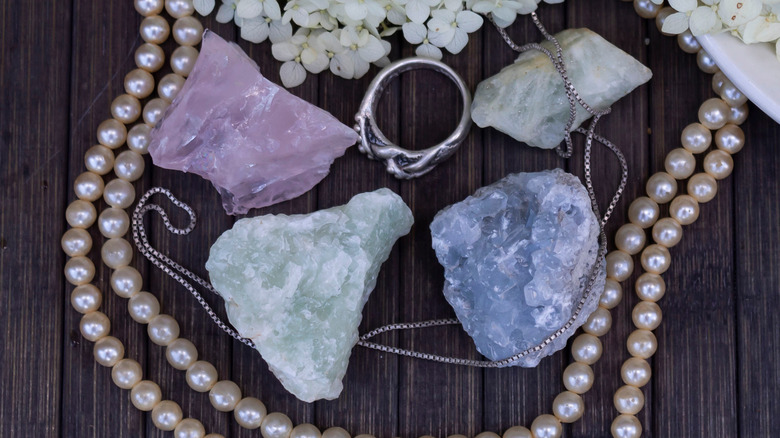 In this day and age, with so much information at our fingertips, social media push notifications, hectic work schedules, and an anxiety-inducing news cycle, it’s safe to say that anyone can make use of celestite’s calming powers. That being said, some of us need it more than others, especially anyone dealing with a stressful work or home environment.

As per Energy Muse, celestite is great for anyone who needs to disconnect from their daily worries or for those with a clouded, uneasy mind. Celestite will bring your thoughts into balance, and can offer you positivity after a difficult breakup, family conflict, work issues, or worry over the future’s uncertainties. Anyone going through a rough patch can find healing in celestite’s powers, and the stone even works to improve sleep.

Apart from easing the mind, celestite works for people looking to connect to a higher power — whether seeking advice, guidance, or gentle, spiritual support (via Healing Crystals For You). Celestite can bring you wisdom and can even put you in contact with “guardian angels,” or cosmic guides. If you’re interested in becoming more intuitive or want to test out your psychic streak, celestite is a great crystal to hold in your hand while you do so.

Lastly, healers should always have a few celestite stones in their arsenal: Per Healing Crystals for You, this crystal has a high-vibration frequency that can boost therapeutic work and bring positivity to the people you help.

Best ways to use celestite 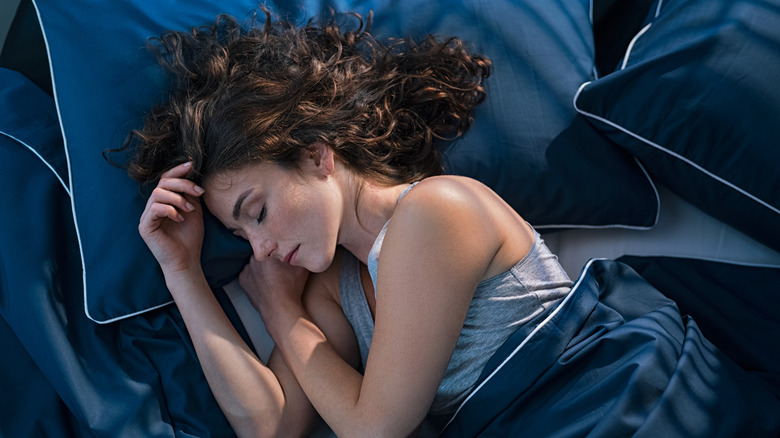 Now that we know all of its spiritual benefits, how should you use celestite? First up, as outlined by Healing Crystals for You, this crystal is perfect for your meditation practice. Keep your celestite in your lap while you calm your mind, and feel its relaxation sweep over you. If you want to use celestite for its psychic, otherworldly properties, keep a few next to your bedside as you connect to a higher realm. If you’re a healer, keeping some celestite stones in your healing room will prove beneficial to your practice and clear out negative energies from that space (via My Stone Meaning).

Energy Muse notes celestite’s power to promote better sleep, so keep the crystal on your nightstand for sweet, serene dreams. Conscious Items also recommends keeping celestite under your pillow for perfect rest night after night. If you’re looking into dream analysis, keeping celestite close while you sleep can also help you remember your dreams more clearly.

Of course, once you get a glimpse of celestite’s gorgeous, sea-blue shade, you’ll undoubtedly want to wear it, too. Wearing celestite jewelry ensures you can take advantage of the crystal’s soothing qualities all day, with Tiny Rituals noting how the skin can directly absorb celestite’s cosmic energy when wearing it on the body. Try a celestite necklace or choker if you want it to work directly on your throat chakra and communication skills, or keep it on a ring to maximize your healing talents.

Celestite's benefits in the home 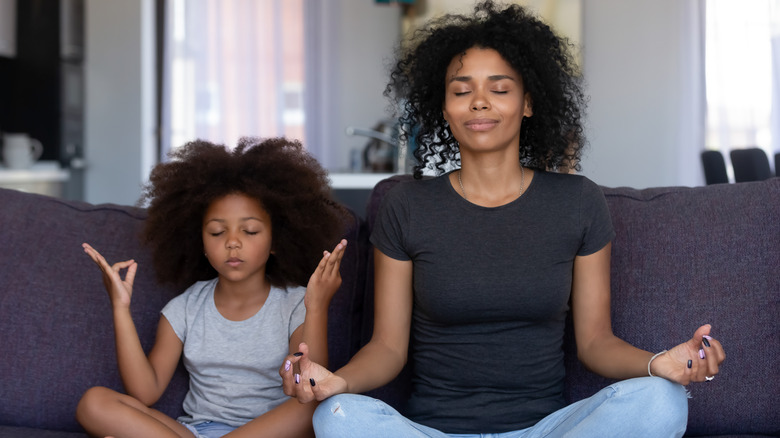 Apart from celestite’s effects on the body, there’s something to be said about this crystal’s effects on a space, too. According to Tiny Rituals, keeping celestite in your home will imbue it with sea-like peace and serenity. If you like to meditate, keep a large celestite crystal next to your cushion or yoga mat, or keep one in your bedroom for a dose of true calm before sleep. Since it injects any space with “lofty lightness,” keeping celestite in your home is akin to opening up a window and letting all the sunshine in.

Moreover, as per Tiny Rituals, celestite works to boost communication -– a surefire way to bring the entire family closer and promote openness. This stone brings positivity to any space, so keeping a large, gorgeous celestite crystal as a coffee table centerpiece will make any day that much more joyful. If you struggle with difficult at-home dynamics or escalating arguments, celestite can promote peace and understanding between family members (via Healing With Crystals).

According to Sage Crystals, celestite works beautifully in any home brimming with anxiety or negative energy, and can infuse a space with the “courage” to move forward from arguments, trauma, or tension. Use celestite as a protector of good vibrations around your home, placing several crystals in the entrance, kitchen, and living spaces. Moreover, Crystals and Jewelry recommends placing this stone in a toxic office space, for improved company-wide dynamics, relationships, and camaraderie.

How to care for celestite 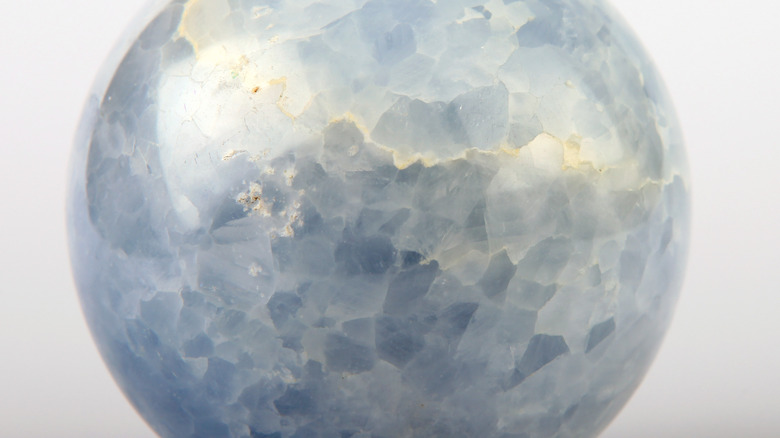 Once you have your celestite in tow, it’s time to think about how to care for it. Per Crystals and Jewelry, you should cleanse your celestite as soon as you acquire it -– you’ll make sure past energies are cleared from it and you can mold it to your own needs. Since crystals absorb vibrations from prior contact, immediate cleansing and charging are crucial.

Tiny Rituals recommends rinsing your celestite in water or keeping it in a bowl of salt for a few hours. This will clear your crystal’s energy field to start fresh. Conscious Items warns that being rough with your stone can cause it to break, since celestite is naturally delicate. The outlet suggests submerging celestite in rice or wrapping it in blue silk for two days for optimal energetic cleansing. My Stone Meaning says you can place your celestite crystal under running water and gently brush off impurities, while Crystals and Jewelry explains that burying celestite in the ground for one day can be beneficial, too.

For a proper recharge, natural light is best. Crystals and Jewelry recommends leaving it under sunlight or moonlight for a few hours to nurture celestite’s energetic field, while Tiny Rituals warns against leaving it in the sun for too long –- it could fade its color. Placing it next to amethyst is another cleansing method (via My Stone Meaning), while Crystals and Jewelry says that celestite stones gain power around burning sage, ringing bells, and sound bowls.