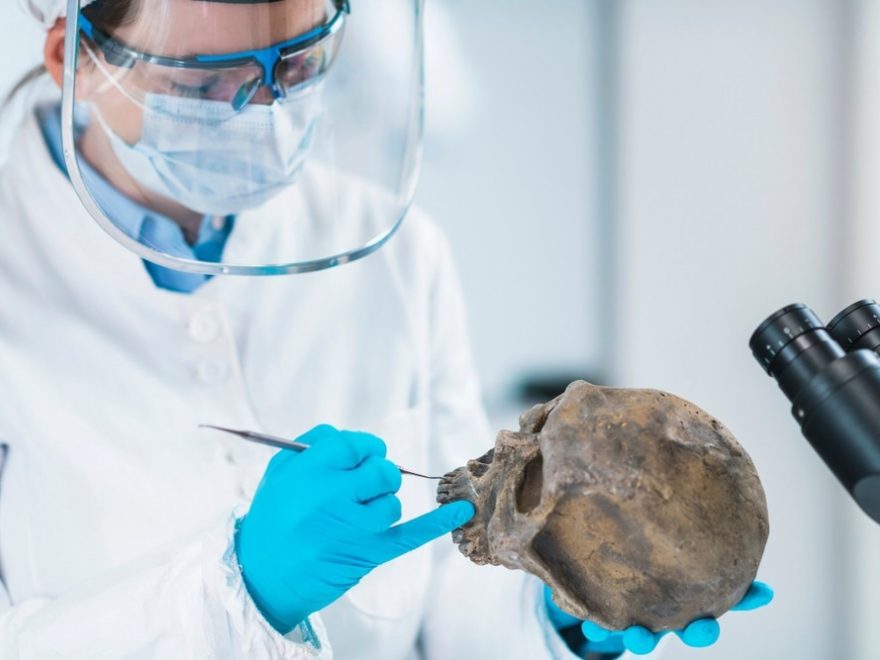 Introduction
Tracing the Evolutionary History of Diseases through Ancient DNA
Extraction, Detection, and Preservation of Pathogen Ancient DNA
Why is it Important to Continue Ancient DNA Research?
Sources
Further Reading

Detailed studies of ancient DNA have provided important insights into the origins and history of infectious diseases. These studies have bettered the understanding of past human disease manifestations (e.g. leprosy, malaria, and tuberculosis). Additionally, it has helped us understand the course of previous devastating epidemics and pandemics, such as recurrences of plague across Eurasia.

Tracing the evolutionary history of diseases through ancient DNA

The study of pathogenic evolution, through ancient DNA, has helped us understand the nature of pathogenic microbes. Although research on ancient DNA has rapidly accelerated due to advancements in genetic sequencing techniques (e.g., high throughput sequencing), most human pathogens from ancient samples remain undetected.

Some of the prominent sources of pathogens’ ancient DNA are urinary, kidney, and placental stones, and calcified abscesses. Interestingly, analysis of a calcified abscess obtained from a woman’s skeletal remains from the 13th century CE Troy revealed the occurrence of maternal sepsis. This finding suggested that maternal sepsis could have been a common cause of death among adult females.

Detection of a particular pathogen could suggest it to be the possible driver of a past mortality event. For instance, the isolation of Yersinia pestis from a cemetery, dated between the 1340s and 1350s, raised the question about its persistence and transmission route that caused recurrent plagues over subsequent centuries. Additionally, the Roman Justinianic plague cycle was discovered via the detection of ancient pathogen DNA from mass burial sites. Interestingly, scientists also recovered plague ancient DNA from western European sites dating back to the 16th century.

Another pathogen that caused a massive population downfall between 1545 and the 1570s was Salmonella enterica. This bacterium causes typhoid. Important insights into the recent H1N1 epidemic were derived from the analysis of ancient DNA that was recovered from paraffin-imbedded lung tissues of soldiers who died during the 1918/1919 influenza pandemic.

Analysis of ancient DNA of S. enterica and Y. pestis revealed a decline of the virulence factor, which reduced disease severity. This could have been driven by the change in pathogen ecology or human behavior.

Evolutionary rates of pathogens are determined by the type of nucleic acid, the host, and genomic size. Typically, a virus with a single-stranded RNA genome exhibits higher evolutionary magnitude compared to those with a double-stranded DNA genome. Ancient pathogen DNA phylogeographic analysis can uncover the ancestral pathogenic movement and its present-day distribution. This analysis provides evolutionary and geographic information.

It is important to preserve unstable and damage-prone ancient nucleic acid because it contains evidence of past human diseases. These DNAs are isolated from variously aged samples. DNA damage is initiated post-mortem through necrosis by host enzymes and/or microbes and via various chemical reactions, such as alkylation, oxidation, and hydrolysis. Post-burial of the body, further DNA damage occurs due to bacterial and fungal pathogens, and varied environmental conditions.

Due to hydrolytic damage to the glycosidic bond and the phosphodiester bond, along with oxidative damage to the pyrimidines and sugar rings, short ancient DNA molecules between 30 and 60 base pairs long can be obtained. An isolated ancient DNA contains a mixture of endogenous (target) with exogenous (non-target) DNAs.

Compilation of the top interviews, articles, and news in the last year.

The majority of ancient DNA, i.e., around 60% to 90%, is lost during extraction, purification steps, and library preparation. Typically, the target constitutes around 1% to 10% of the ancient DNA of pathogens; however, ear ossicles, calcified nodules, and permafrost samples contain more ancient DNA.

Endospores of many bacterial species, such as Clostridium difficile and Bacillus anthracis, are most suitable for long-term DNA preservation. Endospores can be easily revived after decades of dormancy.

The best way to sample pathogenic ancient DNA is at a hospital site or mass grave. Ancient pathogen DNA detection is dependent on its abundance in the blood or tissue, host susceptibility to a particular disease, infection level at the time of death, nutritional state, and prior coinfection or comorbidity.

Typically, pathogens that cause infection are confined to soft tissues and are not recovered from skeletal samples. Hence, it is imperative to obtain DNA samples from soft tissues, gut-associated sediment samples, fecal remains, and histologically preserved samples. However, in a rare case, Salmonella enterica serovar Paratyphi C, was obtained from the teeth sample of a victim of the 16th-century Mesoamerican epidemic. Similarly, bubonic plague was detected in the pulp cavity of teeth samples.

Until 2011, the common analytical tool used to detect ancient pathogen DNA was polymerase chain reaction (PCR). PCR is highly sensitive and specific and can target the smallest DNA. Nevertheless, distinguishing between true human pathogens from environmental relatives is complicated and requires a series of PCR-based studies.

More recently, high-throughput genomic sequencing techniques are used for the identification of pathogens. Considering the genome-level reconstruction, this technique can not only identify the pathogen but link it to a specific place and time scale. Hence, it helps develop the evolutionary pathways of a particular pathogen.

Why is it important to continue ancient DNA research?

Information gathered by studying ancient DNA has enhanced the understanding of pathogenic emergence and evolution over time. It is difficult to confirm evolutionary history owing to multiple possible reservoirs, sparse sampling, and complex genomic recombination. In the future, it is important to conduct collaborative studies between archaeologists, palaeoclimatologists, and historians to improve the understanding of pathogenic evolution.

Analysis of ancient DNA has facilitated the detection of pathogens that caused historical morbidity and mortality events. These DNA samples provided glimpses of the evolutionary and epidemiological past and have helped us better understand the emergence of infectious diseases, such as the current coronavirus disease 2019 (COVID-19) pandemic.

Priyom holds a Ph.D. in Plant Biology and Biotechnology from the University of Madras, India. She is an active researcher and an experienced science writer. Priyom has also co-authored several original research articles that have been published in reputed peer-reviewed journals. She is also an avid reader and an amateur photographer.