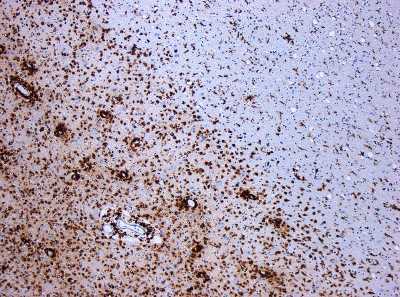 A scientific breakthrough provides new hope for millions of people living with multiple sclerosis. Researchers at Oregon Health & Science University have developed a compound that stimulates repair of the protective sheath that covers nerve cells in the brain and spinal cord.

MS is a chronic condition that affects an estimated 2.3 million people worldwide. In MS, the sheath covering nerve fibers in the brain and spinal cord becomes damaged, slowing or blocking electrical signals from reaching the eyes, muscles and other parts of the body. This sheath is called myelin. Although myelin can regrow through exposure to thyroid hormones, researchers have not pursued thyroid hormone therapies due to unacceptable side effects.

Although several treatments and medications alleviate the symptoms of MS, there is no cure.

“There are no drugs available today that will re-myelinate the de-myelinated axons and nerve fibers, and ours does that,” said senior author Tom Scanlan, Ph.D., professor of physiology and pharmacology in the OHSU School of Medicine.

Co-author Dennis Bourdette, M.D., chair of neurology in the OHSU School of Medicine and director of the OHSU Multiple Sclerosis Center, said he expects it will be a few years before the compound advances to the stage of a clinical trial involving people. Yet the study provides fresh hope for patients in Oregon and beyond.

“It could have a significant impact on patients debilitated by MS,” Bourdette said.

“We’re taking advantage of the endogenous ability of thyroid hormone to repair myelin without the side effects,” said lead author Meredith Hartley, Ph.D., an OHSU postdoctoral researcher in physiology and pharmacology.

Co-authors credited the breakthrough to a collaboration that involved scientists and physicians with expertise ranging across neurology, genetics, advanced imaging, physiology and pharmacology.

One patient said the research could be a “total game-changer” for people with MS.

Laura Wieden, 48, has lived with multiple sclerosis since being diagnosed in 1995. The daughter of Portland advertising executive Dan Wieden, she is the namesake and board member of the Laura Fund for Innovation in Multiple Sclerosis, which funded much of the research involved in the study published today.

“I am really optimistic,” Wieden said. “I hope that this will be literally a missing link that could just change the lives of people with MS.”

Scanlan originally developed sobetirome as a synthetic molecule more than two decades ago, initially with an eye toward using it to lower cholesterol. In recent years, Scanlan’s lab adapted it as a promising treatment for a rare metabolic disease called adrenoleukodystrophy, or ALD.

Six years ago, Bourdette suggested trying the compound to repair myelin in MS.

Supported by funding provided through the Laura Fund and the National Multiple Sclerosis Society, the team turned to Ben Emery, Ph.D., an associate professor of neurology in the OHSU School of Medicine. Emery, an expert who previously established his own lab in Australia focused on the molecular basis of myelination, genetically engineered a mouse model to test the treatment.

With promising early results, researchers wanted to see if they could increase the amount of sobetirome that penetrated into the central nervous system.

They did so through a clever trick of chemistry known as a prodrug strategy.

Scientists added a chemical tag to the original sobetirome molecule, creating an inert compound called Sob-AM2. The tag’s main purpose is to eliminate a negative charge that prevents sobetirome from efficiently penetrating the blood-brain barrier. Once Sob-AM2 slips past the barrier and reaches the brain, it encounters a particular type of brain enzyme that cleaves the tag and converts Sob-AM2 back into sobetirome.

Researchers found that the treatment in mice not only triggered myelin repair, but they also measured substantial motor improvements in mice treated with the compound.

“The mouse showed close to a full recovery,” Scanlan said.

Scientists say they are confident that the compound will translate from mice to people. To that end, OHSU has licensed the technology to Llama Therapeutics Inc., a biotechnology company in San Carlos, California. Llama is working to advance these molecules toward human clinical trials in MS and other diseases.

Bourdette said even though it may not help his patients today, he’s optimistic the discovery eventually will move from the lab into the clinic.