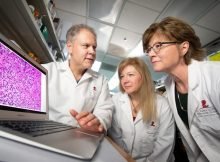 The findings appear online today in the journal Cancer Cell. Suzanne Baker, Ph.D., of the St. Jude Department of Developmental Neurobiology and director of the Brain Tumor Research Division, was the senior author.

DIPGs are incurable brainstem tumors that strike hundreds of children a year in the U.S. Current treatments of radiation and chemotherapy are largely ineffective, and fewer than 10 percent of children with the tumors survive more than two years.

Although many cancers arise from mutations in the genes that directly drive abnormal cell proliferation or survival, others such as DIPGs arise from abnormalities in the cell’s “epigenetic” machinery for managing gene activation, or expression.

Baker and Jinghui Zhang, Ph.D., Department of Computational Biology chair, were among researchers who discovered that a key mutation called H3 K27M in the epigenetic machinery occurs in the vast majority of DIPG cases.

“It wasn’t clear exactly how that translated into changes in regulation of gene expression,” she said. “And it was really completely unclear why this particular mutation was oncogenic in this disease.”

The H3 K27M mutation arises in a gene that codes for a molecule called a histone. Histones function as “smart packaging” for genes—compacting DNA to fit into the confined space of the cell’s nucleus and influencing whether the genes are activated or kept inactive.

“One of the biggest mysteries is why this mutation is so selectively seen in brainstem gliomas and other midline gliomas in kids when the H3 histone is important in packaging the DNA in every cell in the body,” Baker said.

To analyze the mutation’s effects, the researchers genetically engineered a strain of mice so that scientists could selectively switch on the mutation in the same type brain cell that gives rise to the human cancer. Researchers engineered the mice so that the mutant gene was expressed at the same levels as in human DIPGs.

The mouse study revealed critical details of how the mutation causes DIPG. For one thing, the mutation triggers immature cells called neural stem cells to increase their stem cell activity during a specific time in brain development. The finding helps explain why DIPGs occur in children, whose brains are still developing, Baker said.

The scientists also discovered how the H3 K27M mutation works in concert with two other gene mutations known to help drive DIPGs. One mutation causes the loss of a “brake” on cell proliferation called p53. The other mutation triggers over-activation of a cell growth “accelerator” called PDGFR alpha. Combining the mutations dramatically increased the formation of brain tumors in mice.

“In our model, we induced this mutation so that it was expressed throughout the entire central nervous system, and then we let the real biology show us which cells are most susceptible to becoming a tumor when this mutation occurs,” Baker said.

To the researchers’ surprise, when the H3K27M mutation was induced in the entire brain along with the other two mutations, it accelerated tumor formation in the brainstem.

Importantly, when co-author David Ellison, M.D., Ph.D., Department of Pathology chair, compared the mouse tumors with their human DIPG counterparts, he found them to closely resemble one another.

Baker said the engineered mice were highly useful because they reflect a mutation common across different tumors.

“When you compare a collection of DIPG samples from people, there are so many differences between those tumors that it’s difficult to get a clear readout of which part of gene expression is changed by the K27M mutation,” she said. “This mouse model allowed us to do that in a way that would not have been straightforward using human tumors.”

The H3 K27M mutation was known to cause an epigenetic change that removed a signal associated with silent genes, but it did not cause all silent genes to turn on. Instead, the researchers showed that the mutation caused increased expression of genes associated with development that had a specific epigenetic signature termed “bivalent promoters,” revealing an important mechanism of action that is different from many other cancer-causing mutations.

“Understanding how an abnormal epigenome can influence gene expression and drive cancer is important across many different tumor types,” Baker said.