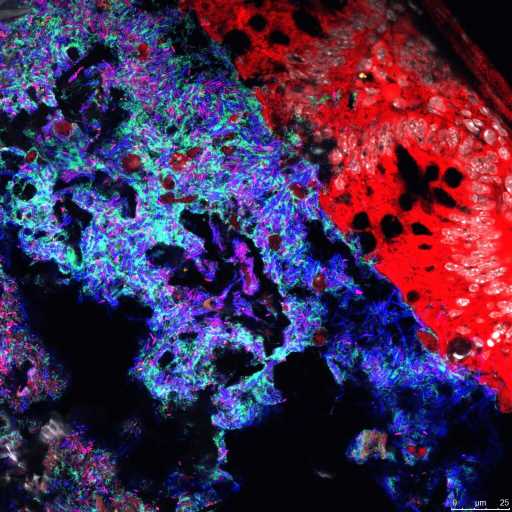 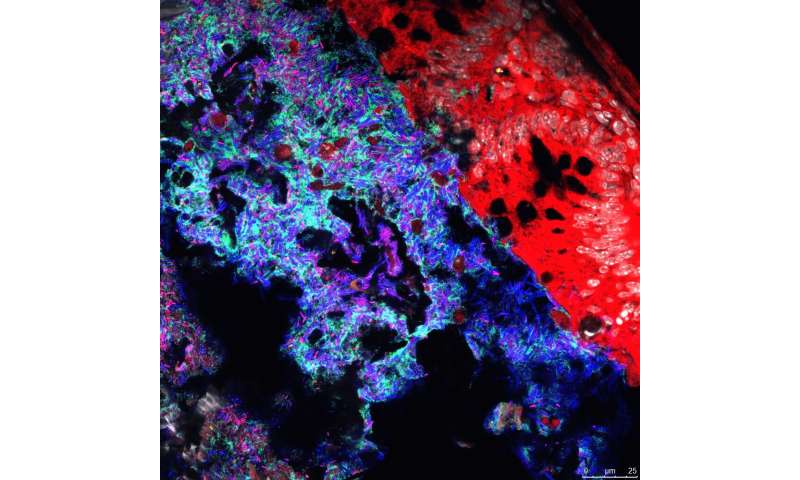 Salmonella enterica is the name of a group of rod-shaped bacteria that can cause gastroenteritis in humans and other animals. Salmonella infections can have serious consequences for certain high-risk groups, such as babies, young children, the elderly and individuals whose immune systems are functionally compromised. Most people with a normal complement of gut microflora (microbiota) generally have little difficulty coping with such infections. Only in 10-20% of cases in which the pathogens are ingested—usually via contaminated food products—does an infection actually result. But the members of the gut microbiota that are responsible for resistance to Salmonella are largely unknown.

Now a group of researchers led by Professor Bärbel Stecher of LMU’s Max von Pettenkofer Institute of Public Health [who is also affiliated with the German Center for Infection Research (DZIF)] has identified one bacterial species which protects mice against Salmonella enterica serovar Typhimurium—one of the two most prevalent pathogenic subspecies found in Germany. The new findings appear in the journal Cell Host & Microbe.

In healthy humans and mice, the gastrointestinal tract is colonized by multiple species of bacteria and other microorganisms. This ‘microbiome’ can protect its hosts from infection with species of Salmonella, because the endogenous members produce inhibitory substances, occupy all the ecological niches available, and consume most of the relevant nutrients, such as sugars or proteins, but also oxygen. In an effort to determine the composition of a healthy gut microbiome which confers optimal protection against bacterial infections, co-authors Sandrine Brugiroux and Debora Garzetti compared the microbiota of several groups of mice. One group had been shown to be resistant to Salmonella infection, while the others were susceptible to the pathogen.

The researchers discovered that the microbiomes of the protected mice included bacteria belonging to the species Mucispirillum schaedleri, which were absent from the other groups. M. schaedleri belongs to a large group of bacterial species whose representatives primarily inhabit environments rich in mud or sediments. Of these, only Mucispirillum spp. occurs in the gastrointestinal tracts of warm-blooded animals like mice and humans. “It had been thought to be relatively rare in human microbiomes, as it is usually not found in stool samples,” says Stecher. “However, this is because it preferentially colonizes the mucous layer of the gut. In studies in which the mucosal biopsies were examined, M. schaedleri was discovered in 50% of subjects.”

To test directly whether the bacterium in fact is causally linked to protection against Salmonella, Simone Herp, who has just completed her doctoral thesis at the Max von Pettenkofer-Institute, took advantage of a gnotobiotic (gnotos, greek: “known”) mouse model, which microbiota can be manipulated. Selected bacterial species can therefore be introduced into these mice, such that the composition of their microbiota is defined and known. “We generated two groups of mice, one of which contains Mucispirillum schaedleri, while the other specifically lacks it. We experimentally infected both groups with Salmonella, and were able to confirm that M. schaedleri is causally associated with protection against Salmonella infections,” says Stecher.

Further investigations revealed that the protective effect of M. schaedleri likely depends on its ability to successfully compete with Salmonella for certain essential nutrients, such as nitrate. This competition does not necessarily mean that the growth rate of the latter is reduced. However, without adequate amounts of nitrate, Salmonella enterica serovar Typhimurium is unable to express its most important virulence factor, a Type III secretion system. As a result, their ability to induce pathogenic changes in the lining of the gut is significantly reduced. The primary virulence factor involved is essentially a molecular machine that acts as syringe, and allows the bacteria to inject toxic proteins into the cells of the gut epithelium. This system enables the bacteria to invade these cells, which in turn leads to inflammation and gastroenteritis.