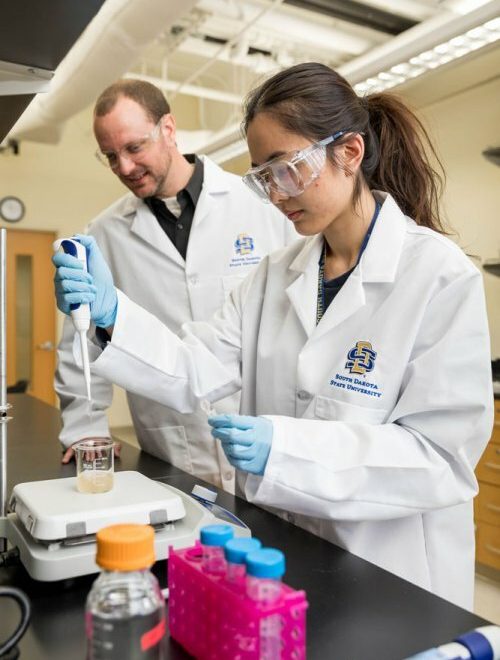 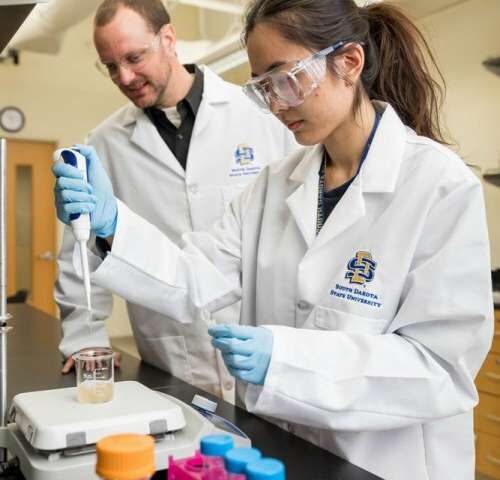 Unique particles modified to mimic bacteria may provide a better means of treating infectious diseases, such as tuberculosis.

Assistant Professor Joshua Reineke of the South Dakota State University Department of Pharmaceutical Sciences and his team modified microparticles, known as metal organic frameworks (MOFs), developed by a research group in France. Other researchers have explored MOFs as a drug-delivery system to treat cancer and AIDS and to reduce blood clots and promote wound healing, but only a few studies looked at their potential to treat infectious diseases.

“This work is the first of its kind using this novel microparticle platform to create a bacteria-mimicking delivery system,” Reineke said. The research was done in collaboration with Professor Christian Serre and graduate student Saad Sene of the Institute of Porous Materials in Paris.

“We demonstrated that we could make particles that look like small spherical- and larger rod-shaped bacteria. In addition, we applied a coating similar to the surface of the bacteria,” Reineke explained. These bacteria-like microparticles may provide a more effective means of treating diseases, such as TB, in which the bacteria survive in specialized scavenging cells called macrophages.

Doctoral student Ailin Guo and postdoctoral researchers Mikhail Durymanov and Anastasia Permyakova worked on the SDSU project, which was supported by the Department of Pharmaceutical Sciences. The technology has potential applications in animal and human health.

Results were published in the online version of Pharmaceutical Research in February and the print version will be available in April. The paper is part of a special issue on infectious diseases. Guo, who is first author on the paper, also won the South Dakota State University’s Three-minute Thesis competition and represented the university at the Midwestern Association of Graduate Schools competition March 20-22 in St. Louis.

“This paper is a proof of concept that demonstrates the microparticles’ ability to mimic bacteria and their potential for use in the future as a drug carrier,” Reineke said. The study will provide preliminary data to apply for federal, private and foundation funding.

Reineke and his team are interested in applying the new technology to Mycobacterium tuberculosis. The only TB vaccine available is used for infants in high-risk countries but protects only against the development of TB meningitis, not the infection itself. There is no approved vaccine for adolescents and adults. 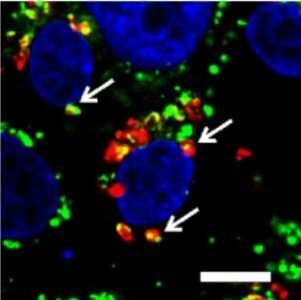 In 2017, 10 million people worldwide became ill with TB and 1.6 million died from the disease, according to the World Health Organization. The U.S. TB Surveillance Report included TB cases from all 50 states, with more than 9,100 individuals affected nationwide in 2017.

The disease struck much closer to home last year when the Minnesota Department of Health investigated a TB outbreak associated with Minnesota State University, Mankato. Eight people received treatment and another 30 individuals with a latent form of the disease tested positive for the pathogen.

“Approximately 90 percent of those affected by TB have the latent form—a lot of people are infected and they don’t know it,” Reineke said. Those with latent TB are not sick and cannot transmit the disease, but they have a 5 to 15 percent lifetime risk of developing the disease.

“Although TB is a serious disease, it is a treatable,” he explained. However, because the treatment protocol is both complex and lengthy, poor patient medication adherence has resulted in the development of multidrug-resistant tuberculosis.

The TB pathogens survive and replicate inside the same macrophages that are supposed to engulf and kill the invading bacteria. To do this, the pathogens initiate a signaling pathway to prevent the macrophages from destroying them or to avoid detection by other immune system cells.

“The particles were made into rods that are two to four micrometers long and coated with components from mycobacterial cell membrane. Those features mimic the morphology and surface properties of real mycobacteria so they will interact with immune cells the same way the bacteria do,” Guo said. The microparticles were tested using swine lung macrophages.

“The coated microparticles were taken up efficiently by alveolar macrophages through a similar internalization mechanism and were capable of colocalization with mycobacteria in the cell,” Guo explained. “They not only look like the bacteria but behave similarly.”