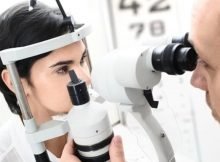 (HealthDay)—Americans were less likely to use eye care in 2014 versus 2008 but had decreased difficulty affording eyeglasses from 2014 onward, according to a study published online Jan. 24 in JAMA Ophthalmology.

Varshini Varadaraj, M.D., from the Johns Hopkins University School of Medicine in Baltimore, and colleagues updated trends in eye care use and affording eyeglasses in an analysis of data from the U.S. National Health Interview Survey from 2008 to 2016.