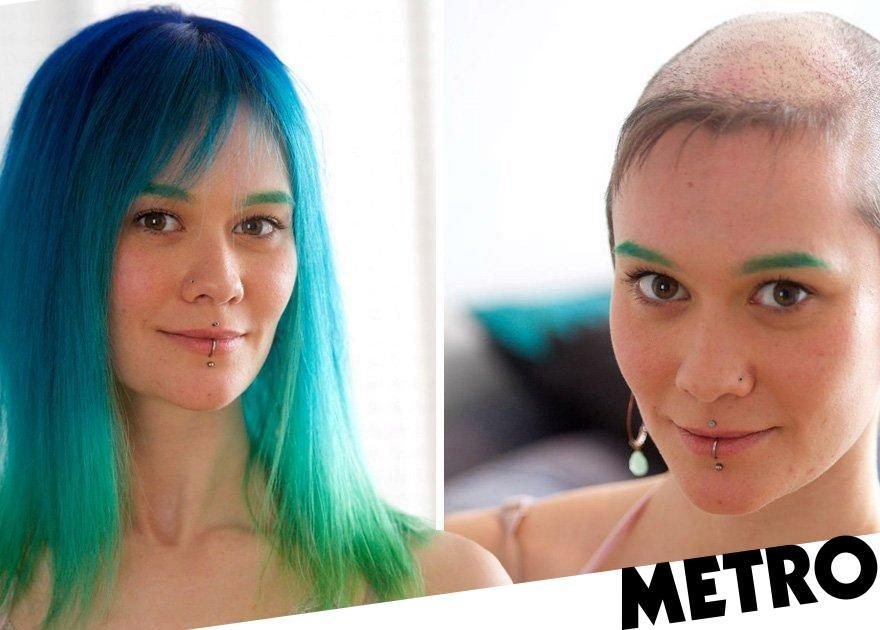 ‘Nobody knew about it, or even the name of the condition. You have no idea why it is happening. You are thinking ‘why am I doing this?’

‘The horrible thing about it is you are doing it to yourself. It isn’t socially acceptable.’

Claire’s issues began when she was nine and started to experience OCD, in the form of an overwhelming urge to clean things.

She had a bald patch on the back of her head before she was 11. By the time she turned 12, she had shaved her head and had to wear a wig.

Claire added: ‘Kids can be really cruel, playing with your wig and pulling it off in class.

‘They don’t realise how important it is to you. They make fun of you and call you ‘alien’.

‘It made things really dark. I was afraid of everyone. You don’t trust people.

‘I had friends, and they were the one reason I was going to school, but I was always thinking “is that person going to try to find a way to see me bald?”‘

Claire became reluctant to meet new people and unable to enjoy her passion of performing in the circus.

‘I was afraid of my wig falling off,’ she said.

‘I tried everything to stop pulling – elastic round my wrists, pulling hair from dolls, medication, hypnotherapy.

‘It didn’t work. I had therapists but they’d never had a patient who pulled their hair before.’

At the age of 13, she twice tried to take her own life.

She added: ‘I couldn’t take being at school. The bullying didn’t help, but I couldn’t just sit in a classroom.

‘I wonder if in my whole life I spent a whole week at school without missing a class.’

Sadly, just before her 14th birthday, her mum Stephanie took her own life.

Claire received treatment in a psychiatric hospital in the months that followed.

‘My only goal was to survive, to go another day,’ Claire said.

After her stay in hospital, Claire enrolled at a school in Lausanne which she says was ‘like a hippie community’.

She added: ‘There was a lot of focus on things like art and singing. They were really supportive, more than at my old school.

‘They knew the kids were there for a reason, and that we needed to express ourselves.’

Despite feeling happier in school, Claire’s anxiety and hair-pulling continued.

She thinks her move to Bristol at 18, to train in the circus at Circomedia school, may have saved her life.

‘Before that I was letting other people decide things for me, and all I wanted was my mum,’ she said.

‘Moving here was me doing something for myself. I am a totally different person since coming here.

‘Bristol is like a big family. I make friends everywhere I go.

People with trich feel an intense urge to pull their hair out and they experience growing tension until they do. After pulling their hair out, they feel a sense of relief.

A person may sometimes pull their hair out in response to a stressful situation, or it may be done without really thinking about it.

‘I have learned to hold myself back from panic. I try not to be stressed about things as much.’

Claire now works as a hair and makeup artist as well as performing at circuses across the country.

‘I still struggle with the picture I have of myself,’ she said. ‘I can’t remember what it feels like to have a full head of hair.’

Most of the hair from Claire’s scalp is gone, but she is planning to have a hair transplant soon.

Her dad Philippe, who has supported her through her hardest times, has offered to pay for the £10,000 operation.

Follicles in her hair will be replanted in bald spots to encourage the hair to grow again.

Claire is one of the young people interviewed in a new documentary by filmmaker Arthur Cauty, Faces of Mental Health.

Claire speaks the closing line of the documentary: ‘Open up. Don’t be scared. It can save your life.’

She said her work to raise awareness of trichotillomania has seen young people with the condition reach out to her.

‘I have had messages from teenagers saying they had been pulling their hair out for years, and they had been hiding it so no one knew,’ she said.

‘They told me that my speaking out had really helped them. It was a really nice feeling to hear that.’

MORE: Woman suspects her husband wants to have sex with their dog

MORE: People with asthma urged to use ‘greener’ inhalers