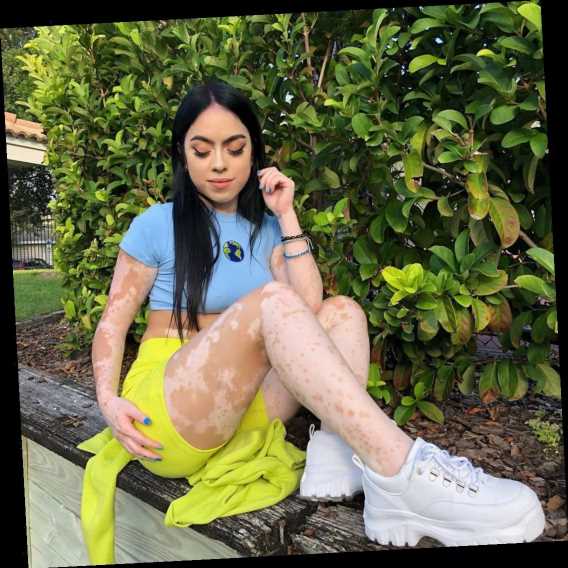 Ash Soto wants others to learn to love themselves.

Known on social media as “the girl with the world painted on her body," Soto has vitiligo, a skin disorder that results in the loss of pigmentation. Using body paint to create art, she has empowered herself while encouraging body acceptance in others.

Soto currently has around 166,000 Instagram followers and regularly garners more than 10,000 likes on her posts, which often feature her signature art — tracing the natural lines on her skin to create a map-like masterpiece.

However, the Florida resident and Puerto Rican native, 26, tells PEOPLE she wasn’t always so confident in herself, especially when she was first diagnosed with vitiligo at age 12. “Right when I showed the doctor my spots, they immediately knew what it was,” she recalls of the initial doctor’s appointment. “I just remember being so scared in that moment and confused. I didn't know what vitiligo was — I had no knowledge of it.”

At school, Soto was bullied and often felt like she had to hide her body under heavy sweaters and pants, even in the Florida heat. Eventually, however, she began to give herself “challenges” to achieve.

“I knew that I didn't want to live that way anymore and I knew that I had to make the change,” she says. “So with time I started doing little challenges, whether it was going outside in shorts or going outside in a tank top, which seems so small for some people, but for me, it was the biggest thing ever.” It was about five years ago that Soto first began using art to to build her confidence, after she accidentally drew on herself and ended up tracing her entire body.

“I started tracing every spot that I could have reached and when I looked in the mirror, it just looked so cool and beautiful — it looked like a map to me,” she says. “So I was like, ‘Wow, this is so empowering. If I could just show people how beautiful this looks, maybe they won't find their vitiligo something that has to be a burden.’”

Now, Soto says she hopes her social media presence and use of body art can inspire others to accept themselves in the way she was able to.

“I just hope that they see that they're not alone, and that there's somebody like them in the world,” she says. “When I was diagnosed, I didn't really have anybody to look up to, so I just want my platform to be that safety place for people that are going through the same thing.”