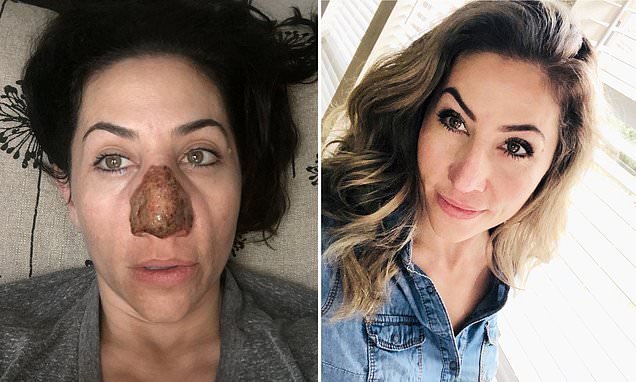 HR worker, 39, whose nose DOUBLED in size because of a medical condition can finally have a social life again after her ‘bulbous’ skin is burned off

A woman who lived as a recluse after her nose doubled in size due to a rare condition is finally leading a normal life – after having the skin burned off.

Adrianna Ely, 39, from Texas, was concerned when the tip of her nose turned red and bulbous in 2013.

It continued to grow so big that she had to open her nostrils with a finger in order to breathe freely, she claims.

The problem destroyed her confidence and she began to avoid any situation where she would have to meet new people, fearing they would stare.

Three years later she was diagnosed with rhinophyma, a skin condition in which the sebaceous glands overgrow, causing the nose to appear enlarged, red and nodular. 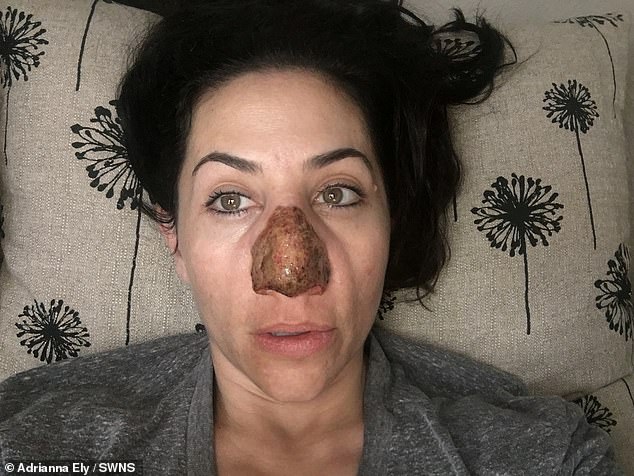 Drastic measures: Adrianna Ely, from Texas, pictured recovering after literally having 3mm of skin from her nose burned off with a CO2 laser 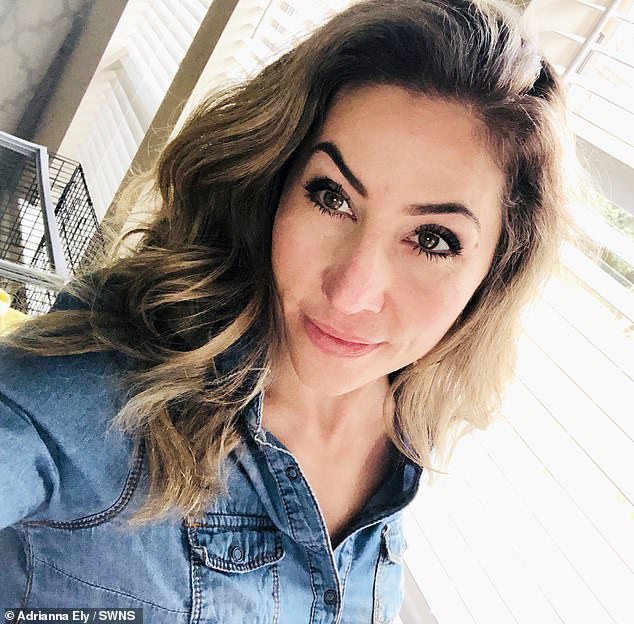 Ta-dah! The 39-year-old is much happier after successfully resolving her case of  rhinophyma

She then underwent a procedure to burn off 3mm of skin from her nose with a laser, and says the treatment has changed her life.

Ms Ely, a HR manager, who lives in Seabrook, said: ‘It’s [rhinophyma] a condition which causes the skin on the nose to morph and grow.

‘I started to notice significant changes in 2013. The tip of my nose began to thicken and bulge.

‘Before this happened, my nose was so drastically different. It got to a point where it didn’t even feel like a nose anymore. It felt like a blob without structure.

‘My nose was changing so much that I didn’t even recognise myself. I was really conscious and worried about it but it was difficult to get an official diagnosis.

‘I thought it might be linked to a rhinoplasty I had in 2008, so I flew to California where I was eventually diagnosed.

‘At night I started to struggle with breathing and I would put my finger under the tip of my nose just so I could hold my nostril open.’ 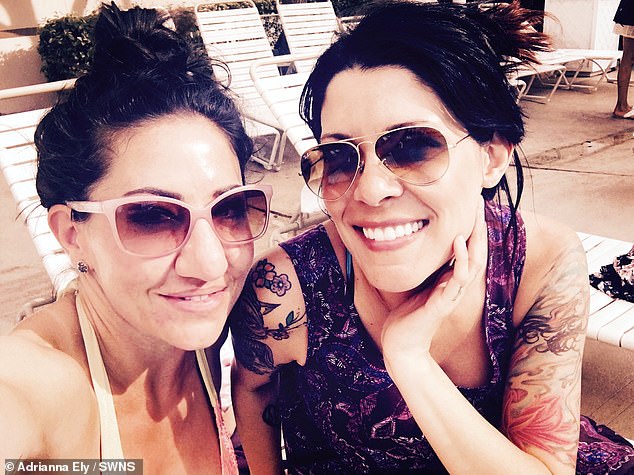 Feeling disfigured: Adrianna Ely (left) is seen here when her nose was at its most bulbous 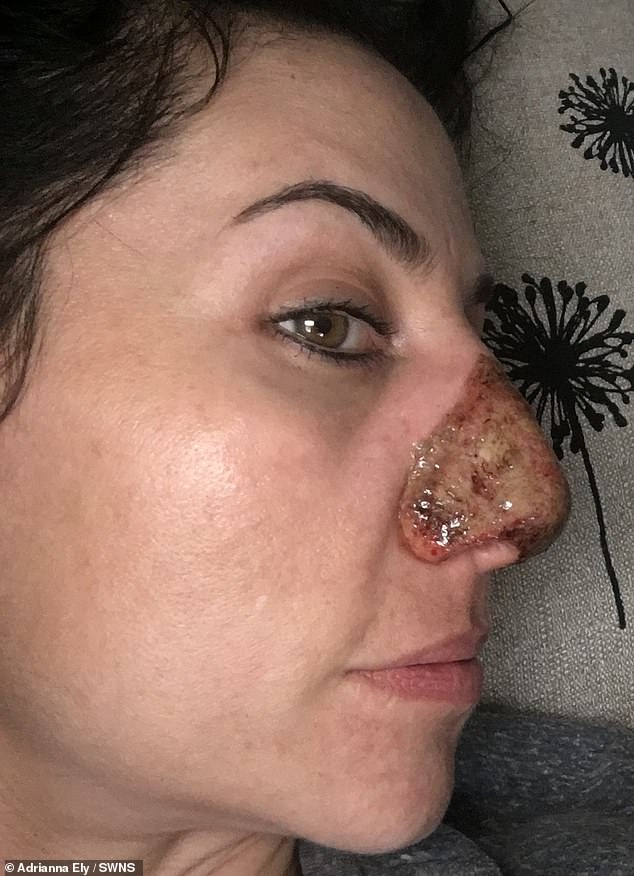 Ouch: ‘My skin was charred and oozing. It was black, green and raw. I had just put blind faith in someone to burn my skin off. I just prayed and prayed that it would grow back,’ she said

Naturally, she felt hugely self-conscious and even likened herself to a freak.

‘I felt like that guy in the documentary Elephant Man. I felt like this growth was just taking over my whole face,’ she added.

‘The condition completely changed how I felt about myself. It made me a recluse. I avoided any situation where I might have to meet new people.

‘No one I knew was ever unkind to me, but I worried about stares or having to meet new people who didn’t know my story.’

Ms Ely said doctors offered little guidance for treatment of the condition, which rarely affects women or people under the age of 60.

It wasn’t until she saw a segment about rhinophyma on daytime TV in 2017 that she was finally offered hope. 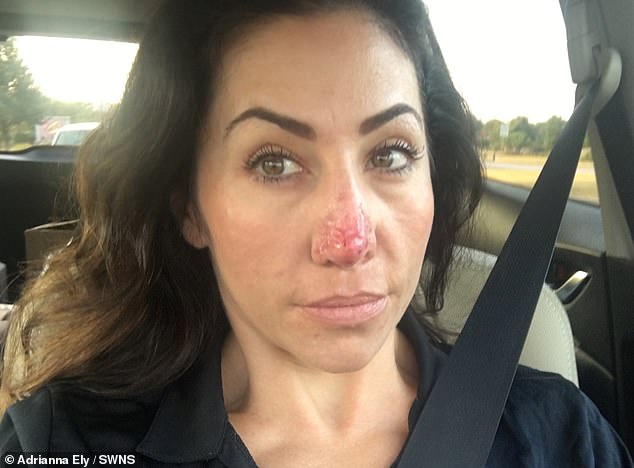 Healing process: Slowly, the skin began to heal and she started to feel more like herself 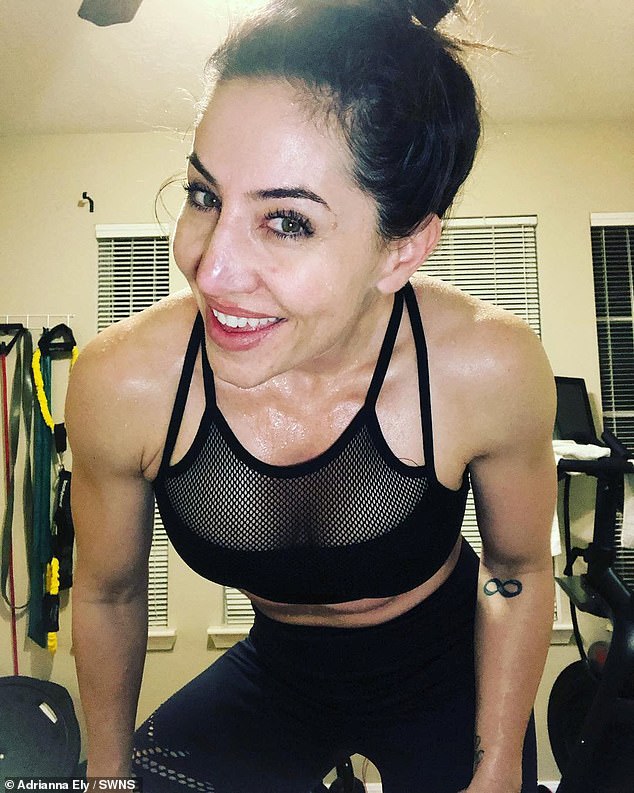 Looking good: Once a recluse because of her medical condition, Ms Ely’s confidence has been fully restored – although doctors offered little guidance for treatment of the condition, which rarely affects women or people under the age of 60

She then approached Dr Daniel Friedmann, of Westlake Dermatology Clinical Research Center in Austin, Texas, who devised a treatment plan that involved resurfacing her skin with a CO2 laser.

Ms Ely had 3mm of skin lasered off the surface of her nose in May 2017, which left it blackened and sore.

‘The procedure took two hours because my doctor said he had to remove double the amount of skin he anticipated.

‘It smelled awful, basically he burned my skin off with an aggressive laser. My doctor prepared me for how it would look when it was done but I when I took off my mask and looked in the mirror at home I was shocked.

‘My skin was charred and oozing. It was black, green and raw. I had just put blind faith in someone to burn my skin off. I just prayed and prayed that it would grow back.’ 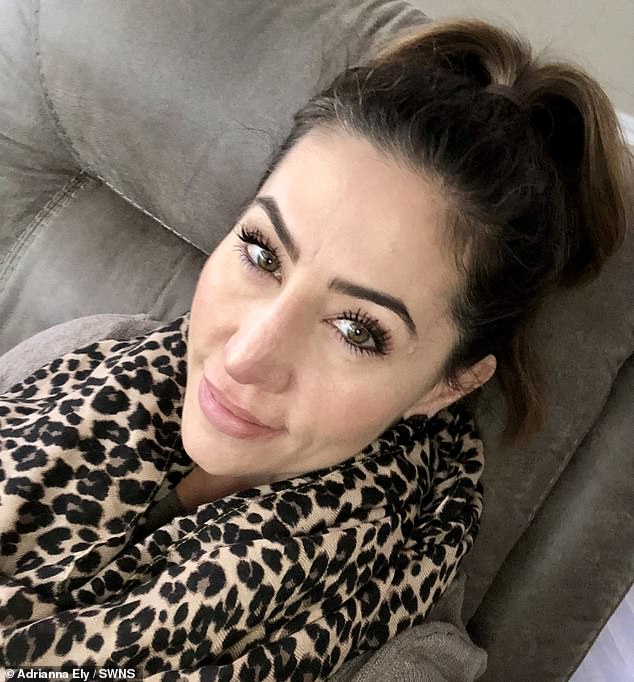 As she is today:  She will have her last treatment in May and says the experience has completely changed her outlook on life and self-image

‘After he did the initial procedure, I felt like I could breathe again for the first time in years. When I went back to work I wore a mask for a few weeks,’ she said.

‘There was a risk of infection but also I worried it was offensive because it was burned flesh and an exposed wound at the end of the day.’

Ms Ely returned to the clinic every week to undergo laser resurfacing treatments which have reshaped her nose and helped regulate pigment.

She will have her last treatment in May and says the experience has completely changed her outlook on life and self-image.

‘There’s been a drastic and incredible difference from that first day until now. I think the whole experience has been a life changer for me. I can hardly even put it into words.

‘I didn’t know I could go through that disfiguring and deforming experience and come out the other side.

‘While I was going through it I was angry at myself for being so impacted by my looks. I asked myself constantly ‘Am I vain?’ But of course it wasn’t. I was being very hard on myself.

‘I think this experience opened me up to what others go through and made me more sensitive and compassionate towards to other people.’

Rhinophyma is a progressive skin condition that affects the nose. The condition is mainly seen in those who have rosacea, a rash that can affect the cheeks, forehead and nose.

If rosacea progresses, the nose becomes redder, swollen at the end and gains a bumpy surface which changes in its shape. This swelling is because there is formation of scar-like tissue and the sebaceous glands (which produce oil on the skin) get bigger.

Much more rarely, swelling can arise on other parts of their face such as the ears and chin. Rhinophyma usually only develops in rosacea which has been active and untreated for many years.

The causes of rhinophyma are not fully understood. Rhinophyma can occur as a more severe stage of rosacea. However, some people have rhinophyma without having rosacea.

Although commonly believed to be due to alcohol, there is no link between rhinophyma and excessive drinking.