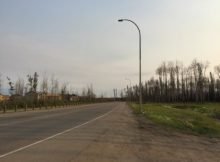 University of Toronto Engineering researchers have examined dust from homes in Fort McMurray, Alta., for evidence of harmful toxins left in the aftermath of the devastating 2016 wildfire. Their study reveals normal levels of contaminants that are comparable to homes across Canada, and so far, no evidence of long-term health risks from fire-ash exposure in residents’ homes.

In May 2016, a large wildfire in the area forced a mandatory evacuation of more than 80,000 residents in the city and surrounding region, making it the largest recorded wildfire evacuation in Canadian history.

As people slowly gained re-entry to their homes a month later, concerns were raised about residual fire ash or toxins in homes that could pose health risks. Smoke and ash can contain a large number of potentially harmful carcinogens, including arsenic, heavy metals and polycyclic aromatic hydrocarbons (PAHs).

In the summer of 2017, chemical engineering professor Arthur Chan and his research team visited Fort McMurray to find out if there was indeed cause for concern. “Many people were saying, ‘I’m not sure if it’s safe for my children to come back and live here after this big fire,'” says Chan.

After analyzing dust collected in the living room and bedroom (the largest and most frequented areas in a home) for toxins such as PAHs, arsenic and heavy metals, the team reported that the levels, while detectable, were not any higher than in Canadian homes that had not been affected by the fire. Their findings were recently published in Geophysical Research Letters.

“That was the surprise — that even after this fire, we actually didn’t see higher levels of contaminants,” says Chan. “The levels we saw were not terribly high. If we compare them to health guidelines — what is considered to be a health risk for soils — the results from samples we collected in the homes were generally lower.”

For some chemicals, such as lead, levels were actually higher in Toronto homes than those in Fort McMurray. “Since Fort McMurray is a newer city, a lot of the infrastructure like pipes and paint don’t contain lead,” says Chan.

Although the results surprised Chan’s team, he suspects the reason that levels were normal has to do with residents’ cleaning habits.

“We think people are cleaning quite a bit after the fire,” he says. “A lot of the houses have gotten insurance companies to cover the cost of a cleaning crew. And even for houses that don’t have insurance clean-up, the residents have cleaned quite thoroughly, due to concerns about residuals from the fire.”

His lab will continue to study samples collected from other areas of the home. They’ve also partnered with a pulmonary specialist at Toronto General Hospital, who is currently assessing the lung health of those who participated in his lab’s study.

Chan stresses that there are other types of health concerns that can result from the fire, ranging from mental health of victims to the occupational health of firefighters who battled the blaze. But for this study in particular, he hopes these findings give the Fort McMurray community some peace of mind.

“I think they should take this as good news. So far, we don’t have any evidence to say that there are any immediate health risks in their homes due to the fire.”