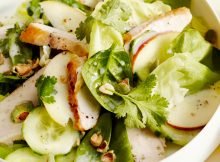 You roll up to your favorite fast food joint and scan the menu for key words like salad, yogurt, grilled, and light, thinking you’ll totally walk away with a healthy option, right?

Hate to break it to you—but those “healthy”-sounding terms don’t automatically make the order a winner. In fact, sometimes the deceivingly nutritious choices can pack the most calories, sugars, and bad-for-you fats on the whole menu. And one fast food meal can even set you back a day’s worth of calories. Yikes.

But nutritionists are on to fast food chains’ sneaky tricks, and they’ve shared the 26 most deceptively healthy menu items so you’ll never order an accidental gut bomb again.

It has only 250 calories in a large serving, which isn’t a lot, but it has 1,200 mg of sodium, which is half a day’s worth of your suggested intake, says Dana Angelo White, M.S., R.D. Instead, swap for something lower in salt, such as a Wendy’s baked potato with sour cream and chive, she says.

“Taco salad sounds healthy enough since it has salad in the title,” says Lauren Harris-Pincus, R.D.N., author of The Protein-Packed Breakfast Club, “but a high-calorie Fiesta Taco Salad from Taco Bell packs around 800 calories and 40 grams of fat thanks to the fried tortilla bowl plus beef, cheese, sour cream and guac.” Not to mention the 1300+ mg of sodium, which can make you bloated and puffy. “If you want to make it lighter, ditch the bowl and ask for the contents over a bed of lettuce,” she says.

A Grilled Chicken Caesar Wrap may sound healthy enough. “Most people think that since wraps are thin, they are better than bread,” says Harris-Pincus. “But, the wrap itself can easily have 300 calories. Add in the creamy dressing, chicken, and croutons and it packs 730 calories and 1,900 mg of sodium,” she says. You can save several hundreds of calories by asking for the dressing on the side and spreading a little on yourself.

“We don’t eat enough seafood overall and aiming for two servings per week is great,” says Harris-Pincus. “However, a Filet-O-Fish sandwich from McDonald’s is not my choice. It’s breaded and fried, served on a white bun with cheese and mayo-laden tarter sauce.” Clocking in around 400 calories with 20 grams of fat for a not-so-large sandwich, this sandwich isn’t a great pick, she says.

While seemingly healthy, most fast-food oatmeal options are loaded with excess carbs and sugar, and they often have very little protein, says Brooke Zigler, R.D.N. The oatmeal at Dunkin Donuts, for example packs 35 grams sugar thanks to sweeteners like brown sugar and cane sugar. Plus, it has 66 grams of carbs, with only five grams of protein.

“Instead, choose the Veggie Egg White Sandwich, which has 15 grams protein and nearly half the amount of carbs of the oatmeal,” says Zigler.

Most people think they’re making a super-healthy choice by choosing a veggie burger instead of a hamburger, but they can have just as much fat and calories. “This specific veggie burger has 390 calories and 17 grams fat—similar to a Whopper Jr. which has 310 calories and 18 grams fat,” says Zigler. “To lighten up a burger, order it without the bun and wrapped in lettuce (most fast food places will happily make this swap for you!),” she says. (Same goes for veggie, FYI.)

Salads are known as a light choice at fast food restaurants, but they’re often just as calorically dense as a burger and fries. “The Southwest Avocado Chicken Salad at Wendy’s clocks in at 600 calories and 41 grams of fat, even more calories than the Dave’s Single burger at 570 calories,” says Zigler. “Instead, order a Caesar Side Salad (use the dressing sparingly) with a small Chili. This totals just 410 calories and will be a filling meal from all of the fiber and protein,” she recommends.

Many fast food restaurants offer a yogurt parfait as a “healthy” breakfast option. But much like oatmeal, those parfaits are often loaded with sugar. “The Lemon Crunch Yogurt Parfait at Starbucks has 340 calories and 35 grams of sugar,” says Zigler. With that high sugar count, you might as well grab the coffee cake, which has the same amount of calories, and only 21 grams of sugar.

For a healthy a.m. option, Zigler says “you’re better off grabbing the Sous Vide Egg Bites: Egg Whites and Red Pepper with a side of fruit,” which will help you feel fuller longer from the combination of both fiber and protein.

“While choosing a grilled chicken over fried is typically a healthier choice, this sandwich still has the same amount of calories as their traditional Chick-fil-a Chicken Sandwich at 440 calories,” says Zigler. Order the regular Grilled Chicken Sandwich without the cheese and bacon. “You can also swap the bread and have it wrapped in lettuce. This will save you hundreds of calories,” she says.

“Sweet potatoes are an amazing source of the antioxidant vitamin A, but frying it is not the healthiest way to enjoy this root vegetable,” says Maggie Moon, R.D. If you’re craving something savory and a little sweet, she recommends trying a small chili, tomato-based soup, or broth-based soup to get your veggies in a healthier way. “Just watch out for sodium in the soup, or be sure to balance it out with the rest of the day’s choices,” she says.

“Veggie pizza sounds healthy but is always up for interpretation,” says Moon. “It often means white flour crust full of sodium, with way too much cheese, topped with a few olives and thin slices of bell peppers,” In other words, the veggie ratio isn’t usually impressive.

“If you’re craving grab-and-go food that still has some veggies, go for a veggie-packed sandwich on whole-wheat bread where you can pick your own ingredients,” she says.

Zucchini sticks are most often breaded and fried, and sometimes have added Parmesan as well, which can make the calorie and unhealthy fat count skyrocket. “While zucchini sticks seem at least semi-healthy, since they include a green vegetable, all the add-ons mean you’re also eating refined grains, more sodium, and more calories,” says Moon. “A whole medium zucchini is less than 40 calories, but a serving of breaded and fried zucchini sticks can run more than 300! Your best bet for actually healthy veggies is a side salad,” she says.

“Club sandwiches are often a good choice, especially if they’re made with whole-grain bread. They have healthy components like lettuce, tomatoes, and lean turkey,” says Moon. Yet the bacon, which is a salty processed meat, can be harmful to overall health in excess, according to the American Heart Association. “Plus, club sandwiches are usually over-sized,” she says.

“To make it healthier, you could order the sandwich and remove the bacon, and save some of it for later, or share it with a friend,” she says. Another alternative is to order a lighter turkey sandwich or wrap, without bacon.

“You may think that a small milkshake is a decent option for dessert, but there can be extra sweeteners and a lot more ice cream than what a one-scoop size would be,” says Maggie Michalcyzk, R.D. “Split that with a friend, or get a vanilla ice cream cone instead that comes in less than 200 calories,” she says.

You may think you’re doing yourself a favor by choosing soup, but be careful, as some creamy soups can be pretty hefty. “Choose broth-based soups filled with beans and veggies for more fiber that will help to keep you full instead,” says Michalcyzk.

This small serving packs a lot of fat and sugar. “I’m not anti-banana bread, but if you decide to order this, you should consider it dessert, rather than breakfast or a snack,” says Suzanne Dixon, R.D.N.. “A single serving has 22 grams of fat, but even worse? It packs 30 grams of sugar,” she says, making it a pretty unhealthy way to kick off the day.

“It’s a salad, what could be bad about that? Twenty grams of sugar!” Dixon says. “That’s 80 percent of the maximum added sugar intake for women, as recommended by the American Heart Association.” And all from a salad. “If that isn’t enough, more than half —54 percent—of calories come from fat in this item,” she says.

The name “veggie” sounds healthy, and of course avocados have good fat, but this eight-inch sub is 810 calories. “Plus, this sandwich has half the recommended daily sodium intake and 10 grams of sugar,” says Dixon.

One “appetizer” serving of this item is 1,240 calories and 82 grams of fat. Ouch. “That’s 60 percent of calories from fat, and 21 of those fat grams are saturated, the worst type for health,” says Dixon. It’s also really salty, with about 2,000 grams of sodium. Go for the shrimp lettuce wraps instead.

A bowl of this soup delivers a massive amount of fat and sodium, especially since it’s likely to be a “side,” rather than your main meal, says Dixon. And if you opt for a bread bowl, keep in mind it’s going to pack on some extra cals and carbs—so consider this one a tasty treat, not a healthy meal.

This seemingly healthy salad is not so great for you after all. It has 1,020 mg of sodium, says Taylor D’Anna, R.D.N. Plus, the dried cranberries and pomegranate vinaigrette dressing add a ton of sugar to this salad, bringing the grand total to a whopping 40 grams.

This strawberry banana smoothie sounds healthy, but it’s basically a glass of sugar in disguise. It has 39 grams of sugar in a small (and who gets a small, anyhow, right?), says D’Anna. Instead, go for greener smoothies that pack lots of healthy veggies and limit fruit to one or two servings in a smoothie.

“A lot of fast food chains have caught on to the fact that providing a few apparently healthy salads helps them check the ‘healthy offering’ box without doing much to the rest of their menu,”says Lyle. “Yet this salad gets its tasty flavors from bacon pieces, cheddar cheese, and buttery croutons.” Pass.

“Don’t be fooled by the words ‘artisan’, ‘grilled chicken’ and ‘mushrooms,’ which all seem to give this sandwich a health halo. Coming in at close to 600 calories, it also packs a third of your fat and saturated fat for the day,” says Meghan Lyle, R.D.

At only $2.69, this portable breakfast seems like a great deal, but if breakfast is really the most important of the day, this is one to skip. “Packing over half of your saturated fat for the day in a few quick, crunchy bites, the breakfast Crunchwrap is almost 660 calories even before any of the ‘add-ons,’” says Lyle.

“Frozen coffees are one of the worst offenders when it comes to nutrition, since drinking your calories leaves you less satisfied than eating them,” says Lyle. The medium size of this blended coffee has 890 calories and an astounding 140 grams of sugar. For a visual—that is nearly 12 tablespoons of sugar in a single drink. Yikes.