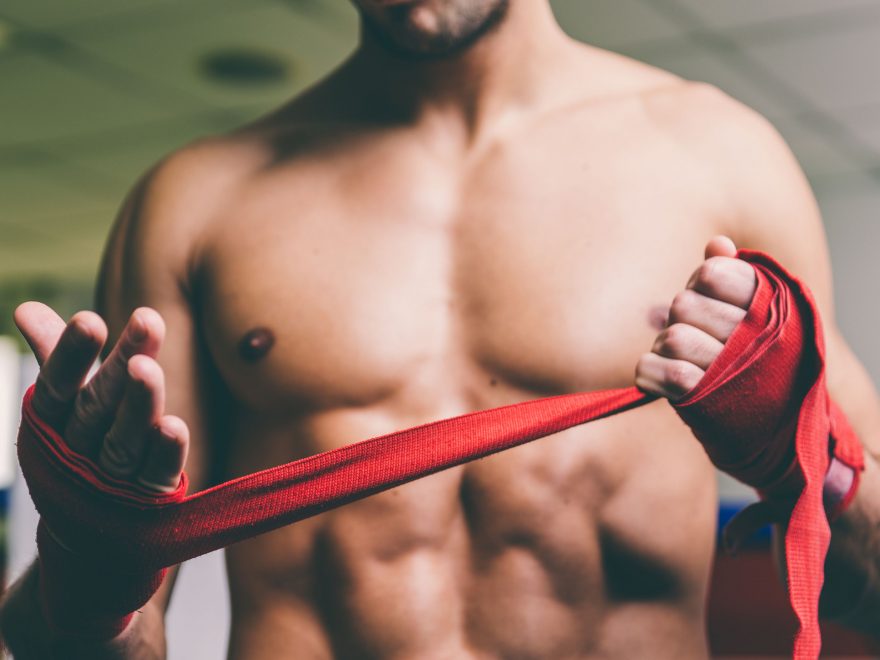 Two years ago, in what could best be described as a fit of early-middle-age madness, I fought another human being in a cage.

My reasons for doing so were simple: I wanted a new life. A life free of the thousand and one barriers and borders and definitions I’d created over the previous 40 years, all my stifling and suffocating notions of myself—that I was a decadent who didn’t care about the health of my body. Or that I was a pacifist without an ounce of the desire to harm in me, or a coward whose avoidance of physical confrontation was actually evidence of his refinement. I was tired of being a decadent and a pacifist, devoted only to physical pleasure and irony and drinking and writing and the life of the mind. I was fulfilled and indulged and free of pain and strife and the need to protect myself or risk anything. Life was bliss, and I was bored to tears.

As advertised, learning to fight provided me all the transformation I could ever want. First there was the transformation of my body, which landed me in front of the mirror on more nights than I can remember. I gazed at my once-insignificant shoulders, which had turned round and taut, curving and dipping into thick lines between my biceps and triceps. My pectoral muscles shot upwards in a “w” from the bottom of my ribcage to my armpits. My chest, suddenly wide and imposing, sat perched atop a flat stomach on which, in certain lights and in certain moods, I swear I could make out my abdominal muscles.

There were also changes in my relationship to physical exertion and exhaustion, in my capacity for discipline and self-control and my desire for movement and effort. But the biggest transformation came in my ability to tolerate and even enjoy the pain caused by violence, to not cower or run, but to welcome the punches to the face and the kicks to the side, and the awful chokes I endured during my numerous sparring sessions. I wanted to face and transcend my lifelong fear of fighting. Like countless fighters before me, I was physically altering how my brain responded to terror one training session at a time, distorting and muffling its basic survival instincts in the name of rebirth.

There are two areas of the human brain that are called upon when a potential danger appears: the ancient amygdala, which deals with primitive processes, like fear and aggression, and the much younger prefrontal cortex, the area associated with our higher functions, like reason and decision-making, says Michael Drew, an associate professor in the Department of Neuroscience at the University of Texas at Austin. When faced with a potential threat, the amygdala sends messages to the cortex, which then analyzes them to gauge their nature and severity.

If these two systems determine that danger is real, Drew says, the brain will focus all the body’s resources on struggle, flooding the bloodstream with adrenaline, pounding the heart to pump blood faster, releasing pain-deadening chemicals, and preparing the whole organism to protect itself. A balance between the amygdala and prefrontal cortex is needed to keep the host alive and free from unnecessary panic, to allow it to acknowledge fear without being swamped by it.

The thing is, the prefrontal cortex is painfully slow. Often, by the time the rational part of the brain realizes it’s at risk, the amygdala has already triggered automatic responses in the body, and we find ourselves reacting “instinctively” to a threat rather than consciously, Drew says. So in order for the human body to respond in a more rational and concerted way to high-stress situations—like, say, an amateur cage fight in Long Island—motor routines have to become ingrained through repetition, rewiring the brain’s response to specific kinds of fear. Repeated enough times, these skills become ingrained in the brain, and knowledge and ability become subconscious: a new instinct.

This is one reason why soldiers and tightrope walkers and fighters train as much as they do. It’s not just to learn techniques, but to habituate themselves to the conditions of high-stress, high-fear situations so that their primal instincts to panic are overridden by new motor routines. If the brain and the body are exposed enough times to a specific fear without harm, Drew says, the prefrontal cortex can learn to override the amygdala and its primordial panic when real danger finally comes.

So my desire for a new life was being realized, one synapse at a time. And all it took was snuffing out all my instincts toward self-preservation through repeated acts of self-destruction. All was right in the world.

But as my fight day got closer, I started to worry about a different kind of transformation, something darker and more sinister than the facing of old fears or the acquisition of visible abs. Awful questions were forcing their way into my head, consuming me when I was running on the treadmill or hitting the heavy bag: Did I have it in me to hurt somebody? Did I actually want to hurt somebody? Deep down was I pining to hurt somebody? Was there real violence in me? Had it been waiting all those civilized decades to get out? And if so, what would happen when it finally did? Would something dormant get stirred up in me after 40 frustrated years and refuse to be put back down again? Was I risking damage far beyond the physical by stepping into that cage? Was my soul in peril? What if I became a monster? And what if I liked it?

Norman Mailer once wrote that fighting “arouses two of the deepest anxieties we contain. There is not only the fear of getting hurt, which is profound in more men than will admit to it, but there is the opposite panic, equally unadmitted, of hurting others.” But there’s a third anxiety Mailer failed to mention, maybe the worst of them all: the terror of discovering in the middle of a fight that you enjoy hurting others. It was this possibility that worried me: realizing, after all those peaceful, passive years, that I found pleasure, even meaning, in causing pain. My new fear was no longer that I would run away from violence, but that I would revel in it, that I would thrive on it.

This is the dark side of self-improvement and transformation, of that all-American push toward a better, purer, more perfect version of ourselves: discovering that the “new you” you’ve been dreaming about is actually a horrible beast, a cruel and sinister agent, the Hyde to your civilized Jekyll.

This may sound like a merely poetic concern, but the danger is real, neurologically speaking. The distortion of the soul can actually be manifested in the brain. As part of its response to high-stress situations the body releases the steroid hormone cortisol into the blood, which carries it throughout the body and across the blood-brain barrier, Drew says. Of the receptors in the brain that cortisol acts on, one enhances plasticity, the other impairs it. In other words, when a person is exposed to chronic stress, some areas of the brain can actually stretch and grow.

Take the ancient amygdala. “In response to the presence of excessive cortisol, amygdaloid neurons can branch out and grow more synapses,” Drew says, “enhancing the brain’s capacity for fear and aggression and other instinctual, defensive, and violent responses.” So if fighters could be said to live in a perpetual state of fight-or-flight, a sort of low-grade chronic stress, it’s possible that they’re forever growing that primordial, unregulated, aggressive, fear-driven region of the brain we share with even the lowliest beasts of the jungle.

Which means, unlike other workout routines, fitness challenges, and self-improvement regimens, fighting brings with it the very real peril of unearthing parts of yourself that may be better left undiscovered—and the fear that, once roused, they can never be buried away again. A new life, a new you.

This story is adapted from the upcoming book Why We Fight: One Man’s Search for Meaning Inside the Ring, by Josh Rosenblatt, available January 15.