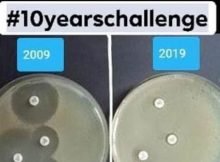 The depressing ’10-year challenge’ against antibiotic resistance: Doctors share image to show germs no longer respond to the drugs that worked a decade ago

Compared to their 2009 10-year challenge photo, antibiotics don’t look so good too good.

Several doctors are trying to harness the power of the #10YearChallenge trend on social media to draw attention to the growing, worldwide public health crisis of antibiotic resistance.

They are re-tweeting side-by-side photos of what appear to be petri dishes full of bacteria with antibiotics sitting in them – one from 2009 and one from 2019.

‘This is genius and incredibly depressing at the same time,’ tweeted Dr Kate Flavin, an internist in the UK.

Although there is no way to know for sure what exactly is in the dishes, an antibiotic resistance expert told Daily Mail Online they demonstrate exactly he would expect to see in such a test of antibiotics against bacteria that become resistant.

In the first, you can see clearings in the greenish culture surrounding each sample of the drugs.

But in the 2019 photo, the bacteria’s density is completely unchanged – as would be an infection in your own body – by the drugs, because the germs have been so over-exposed to antibiotics that the drugs no longer work. 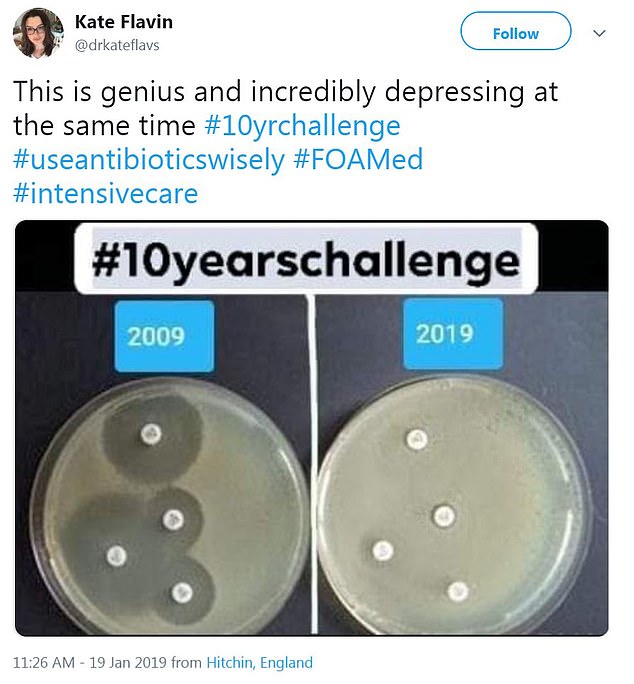 Dr Kate Flavin didn’t post pictures of what she looked like 10 years ago versus now, but of what antibiotics effects on resistant bacteria were in 2009 versus today

More than two million Americans contract antibiotic resistant infections every year, according to the Centers for Disease Control and Prevention’s (CDC) estimates.

The CDC says that at least 23,000 people die of these infections annually, but recent reviews of death records suggest an even more grave scenario.

And it’s far from a nation-specific issue.

The World Health Organization calls the phenomenon ‘one of the biggest threats to global health, food security and development today.’

The European Union sees 25,000 deaths from antibiotic resistance a year, 38,000 people succumb to these infections a year, and 58,000 infants died in just one year due to infections passed to them from their mothers.

It isn’t that medicine has failed to keep up with the way that antibiotics naturally evolve.

Instead, we have created this problem.

In their #10yearchallenge posts, people show off how far they have come, whether in the process of weight loss and fitness chances, the evolution of their personal style or simply in getting older. It’s a way of saying ‘look what I’ve done.’

We are responsible for the way that bacteria and their response to antibiotics have changed, too.

The more that bacteria are exposed to antibiotics, the more we train them for survival of the fittest. The weakest strains are killed off by the drugs, but the ones that have slight mutations that make antibiotics a poor match for them live on, and multiply.

Drug companies have pushed antibiotics on doctors, who have in turn pushed them on patients, often as a way to simply appease worried parents or patients who aren’t happy with the medical advise to go home and rest up when they have a virus.

But antibiotics will do nothing for, say, the common cold, which is a viral infection.

WHAT IS ANTIBIOTIC RESISTANCE?

Antibiotics have been doled out unnecessarily by GPs and hospital staff for decades, fueling once harmless bacteria to become superbugs.

The World Health Organization (WHO) has previously warned if nothing is done the world is heading for a ‘post-antibiotic’ era.

It claimed common infections, such as chlamydia, will become killers without immediate solutions to the growing crisis.

Bacteria can become drug resistant when people take incorrect doses of antibiotics or if they are given out unnecessarily.

Chief medical officer Dame Sally Davies claimed in 2016 that the threat of antibiotic resistance is as severe as terrorism.

Figures estimate that superbugs will kill 10 million people each year by 2050, with patients succumbing to once harmless bugs.

Around 700,000 people already die yearly due to drug-resistant infections including tuberculosis (TB), HIV and malaria across the world.

Concerns have repeatedly been raised that medicine will be taken back to the ‘dark ages’ if antibiotics are rendered ineffective in the coming years.

In addition to existing drugs becoming less effective, there have only been one or two new antibiotics developed in the last 30 years.

In September, the WHO warned antibiotics are ‘running out’ as a report found a ‘serious lack’ of new drugs in the development pipeline.

Without antibiotics, C-sections, cancer treatments and hip replacements will become incredibly ‘risky’, it was said at the time.

Livestock, too, are treated with preventative antibiotics, further fueling the spread of resistance.

Since 2007, the number of infections that re resistant to antibiotics has doubled in Europe, and is on a similarly steep rise elsewhere in the world.

We are losing this 10-year challenge.

When looking at the image of antibiotics amid bacteria, ‘I hope people will see that antibiotics are not as effective as they once were in the last 10 years,’ Dr Jason Newland, a pediatrics professor and director of the antimicrobial stewardship program at Washington University, St Louis.

‘And I hope that they might translate that to mean: “An antibiotic might not work for me if I get an infection.”‘

Dr Newland adds: ‘It’s hard for people to realize that this could happen.’

And there’s really no going back. If we did a 10-year challenge photo again a decade from now, there would be some bacteria that would be resistant to some antibiotics that had once worked against them.

But we can make some progress by in slowing down the spread of resistance by attacking this growing crisis from three fronts, Dr Newland says.

‘First, we have to continue as a society – meaning all of us, whether we work in human or animal health or we are patients or caregivers – we all have to recognize the consequences of excessive use of antibiotics and we all must be doing our part in using these life-saving medications – but only when needed,’ Dr Newland says.

‘If we do that then we can slow or curb the rate at which bacteria become resistant, but we can’t fool ourselves and think it will eliminate [resistance] but it will allow ours to be around and effective longer.’

And we need to continue to develop new antibiotics as well as become more regimented about measures to prevent infection in the first place, like thorough hand-washing, not going to work when ill and vaccination.

Without these practices, antibiotic resistance is only going to get worse, and at an accelerated rate.

‘You can’t convey this in that picture, but this actually has human health implications,’ Dr Newland says.