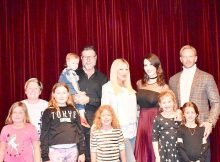 Dean McDermott is “horrified and disgusted” after commenters criticized his and Tori Spelling’s five kids on Instagram, accusing the parents of letting them get overweight and questioning their clothing choices.

Spelling, 45, shared a photo of the whole family — her and McDermott along with kids Liam, 11, Stella, 10, Hattie, 7, Finn, 6, and Beau, 1 — at a screening of A Dog’s Way Home on Thursday. But the comments quickly turned negative, with people asking, “why do you let your kids get so fat?” and saying they look “terrible.”

McDermott, 52, responded with a furious message.

“I am absolutely horrified and disgusted by the comments being left about my children,” he said. “Body shaming and bullying my children??!! What is wrong with you people??!!”

McDermott said that his kids are going through “different growth stages” and that it’s cruel to comment on their sizes.

“As far as saying my children are overweight, well that’s just mean and uncalled for,” he said. “They’re going through different growth phases, and even if our children are on the bigger side. Who cares. They’re happy and healthy and I’m sorry they don’t look like skinny supermodels. People come in all shapes and sizes. So who are you to judge.”

He also said that the event was right after a “long day” at school, and he doesn’t know any kids who wouldn’t look “disheveled” at that point — plus the kids had been running around and playing with other children.

“So I apologize we didn’t get the iron and steamer out to make them perfect for you,” he said sarcastically. “They’re kids. They’re messy and dirty. That’s what they do.”

And McDermott questioned why people were criticizing the kid’s budget-friendly clothing choices.

“And what’s wrong with shopping at Target??!! Over half of America shops there,” he said. “The way they grow out of clothing so quickly is astounding. Are we supposed to shop at Gucci?? These are kids folks. Messy stinky little bundles of fun, laughter and love.”

RELATED VIDEO: Selena Gomez Responds to Bikini Body Shamers: ‘I Chose to Take Care of Myself Because I Want To’

The actor ended his comment questioning why people would waste their time criticizing the kids, and thanking those who came to their defense.

“You should all be ashamed of yourselves for passing such horrible judgement on innocent beautiful children. Shame on you all!!!!” he said. “Thank you to all the people who came to our defense. You’re all kind compassionate souls. Down with the haters!! Up with love!!”

This comes just four months after Spelling had to defend the kids on Instagram, when commenters again disparaged the five children and their parents because of their clothes and size.

“I am a proud mama bear and I enjoy sharing our family journey with my family, friends, fans and online supportive and loyal community,” the Beverly Hills, 90210 alum wrote. “For all the individuals on here that felt the need to #momshame and #kidshame me and my children I say ‘Shame on you!’ I was raised to believe that if you can’t say anything nice about someone then don’t say anything at all.”

“Lift others up and you in turn lift yourself up #endcyberbullying,” she concluded.