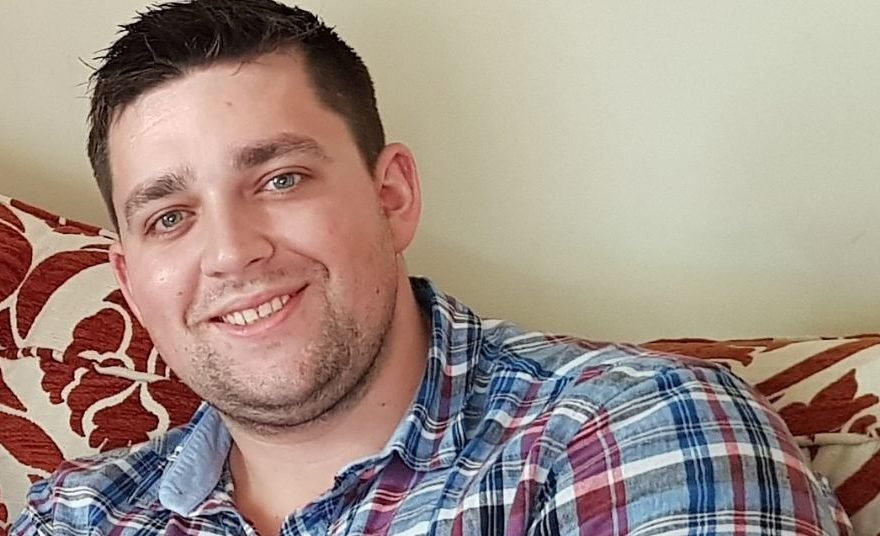 Like most men, Stephen Griffin’s weight gain came on slowly. A few pounds crept on here, another few pounds there, and soon enough he was weighing in at 342 pounds by his mid-twenties. As a member of the Irish Police, Griffin’s weight not only became problematic, it also became the butt of a few jokes. But those very same snide remarks motivated Griffin to drop 100 pounds—and now he’s the one laughing.

“I had become incredibly lazy. I think I even knew that much myself at the time,” Griffin says. ”But I simply didn’t have the want or the drive to go and change it.”

At his job as a member of An Garda Siochana—the Irish police—Griffin’s day-to-day involved shift work. That meant a lot of lying around between shifts, doing nothing but scrolling on his phone and eating.

Sure, he loved sports, but as the pounds piled on, he found every excuse to stop playing and decided to watch them instead.

“I used watching sports as an excuse. I’d order pizza or Chinese take away to have ‘with the game.’ I justified bad eating habits this way,” he says. Thanks to unlimited cable, that meant any game was at his fingertips—and takeout was a mainstay.

Somehow, Griffin just let it all go, and got to his heaviest weight without realizing it. But the people around him—along with all of his old clothes—certainly did. Griffin’s first weight loss “lightbulb” moment came when he had to get a suit tailored, as it no longer fit. The tailor commented that Griffin was now “quite chunky” for the outfit.

His next epiphany occurred after he returned from a holiday in the Canary Islands in August of 2018. “I went looking for holiday snaps, only to see something that startled me,” Griffin says. “A photo of me, taken accidentally and unposed, after I took a proper photo in a green t-shirt. I was pouring out of it, it was ‘hugging’ me worse than any t-shirt I could recall. Seeing it, I remember thinking ‘is that what people see when they look at me?’”

That same week, Griffin found himself as the butt of a sly joke made by a work colleague regarding his weight and his consumption of food.

“It bothered me so much at the time, more so than many more sometimes more obvious ‘fat jokes,’” he saud. This comment, Griffin explaid, was the straw that broke the camel’s back—but instead of dwelling on it now, he prefers to focus on the more positive end result: A 100-pound weight loss transformation and a new outlook on life.

After hearing the joke and seeing himself in his vacation photo, Griffin reached out to an old friend, Paul Dermody, who just so happened to be a personal trainer. “That in itself was tough,” Griffin says. “That message was both a sign that I had gone to a point I couldn’t fix alone and yet, all the same, showed that I was willing to change. Many say they ‘wanted’ to lose weight—for me, I ‘needed’ to lose it.”

Dermody quickly helped Griffin get back on track by having him log all of his food through an app. This immediately showed Griffin just how unhealthy all his favorite foods really were. Rather than dwell, or even banish tasty treats forever, the pair worked toward eating more balanced meals and achieving a calorie deficit each day.

Then came the workouts. Dermody gave Griffin a goal of 10,000 steps a day. No more sitting for hours on end in front of the TV between shifts. For Griffin, one of his most significant changes was the simplest: He bought Tupperware. “Lots of it.”

He prepped every meal, which he explained was a “big help for me, as I know what I’ve cooked, and if I’ve put in the time to cook it I’m more likely to feel the want to eat it myself.” Within the first few weeks, Griffin saw the scales move—and move fast. “I made significant changes by simply being better at moving and getting workouts in, accompanied by being in a good deficit,” he said.

Though he was pleased by seeing his weight drop on the scale, he was more excited to see how he looked in all those previously tight-fitting t-shirts. “I saw a difference in myself after a month or so, colleagues began to comment after two. And while I had many moments of happiness at specific weights on the way down, for me, my first ‘wow’ moment came around Christmas, about four months in when I was planning outfits, and suddenly realized that the clothes were now far too big.”

Just four months into his journey, Griffin was fitting into old sizes, and no longer had to buy from the Big & Tall section. As he noted, it was a moment of pride that left him sitting “with a smile on my face and a fire in my belly to keep going and to make even bigger improvements and changes.”

In just seven months, thanks to his own willpower, support from those around him, and a new love of Tupperware, Griffin, now 28, dropped to his new weight of 244 pounds. And he has no plans to slow down until he hits his goal weight of 198 pounds.

“It’s about improvements—being better than I was yesterday, or last week, or even six months ago, which granted, wouldn’t be tough,” Griffin jokes. “I’m losing weight for my future.”

Griffin added that he “picked my confidence and self-esteem of the floor, and I’m starting to feel like the ‘old me’” and thinks anyone can, too—all they need to do is start. “Have a goal,” he suggests. “It doesn’t have to be specific, but be focused on something.” He notes that there will most certainly be days you don’t want to train, or don’t want to eat a salad, or just don’t want to do anything at all, and that’s ok.

“You’re not gonna go for the next 60 or 70 years without cravings,” he says, “But ask yourself: Why did you start? How did it feel when you first saw changes? Is this gonna get you closer to your goal?”

Finally, he adds, be patient. “It won’t happen overnight. Find a way to enjoy the process, whether that’s the actual diet that works for you, or the training. To each to their own.”