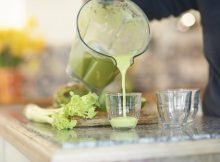 Celery juice is shaping up to be one of the biggest trends of 2019 with everyone from celebs to wellness influencers gulping down the green stuff first thing in the morning. Proponents say drinking celery juice has some major health benefits including reducing inflammation and improving gut health, but is it everything it’s cracked up to be? Here’s what you need to know about celery juice and its health benefits.

First of all… where did this trend come from?

We’re accustomed to downing green juices packed with every imaginable piece of produce and superhero supplement, but plain ol’ celery juice has proved increasingly popular. The last few months have seen a serious uptick in the amount of celery juice selfies we’re seeing in our Insta feed and since November 2018, Google searches for the vegetable concoction have exploded. The concept of celery juice as a cure-all came from New York Times best-selling author and “Medical Medium” Anthony William, who has been plugging the practice for over 20 years.

What is celery juice?

It’s fairly straight forward. Proponents recommend juicing one large bunch of celery (which makes around 500ml of juice) and drinking it every AM on an empty stomach.

What are the benefits of drinking celery juice?

According William, drinking celery juice every morning is “truly the saviour when it comes to chronic illness.”

But a small disclaimer on William’s website points out that he’s “is not a licensed medical doctor, chiropractor, osteopathic physician, naturopathic doctor, nutritionist, pharmacist, psychologist, psychotherapist, or other formally licensed healthcare professional, practitioner or provider of any kind.”

So what does a qualified dietitian think?

Celery juice is a healthy drink option but it’s important to not get hung up on thinking that it’s liquid gold.

“With claims of curing auto immune diseases, preventing cancer and alkalising your body celery juice sounds too good to be true!” dietitian Natalie von Bertouch told Women’s Health. “And unfortunately when things sound too good to be true they often are. Celery juice is no different. There is currently no scientific evidence to suggest drinking celery juice will have any of the advertised health benefits. Whilst celery juice is safe to drink and can be part of a healthy diet, it is not the superfood it is made out to be.”

Consuming celery in juice form also removes much of its beneficial dietary fibre. It could also negatively effect people on anticoagulant drugs as its high vitamin K content can influence blood clotting. Celery is quite high in FODMAPs so it can exacerbate symptoms for people with Irritable Bowel Syndrome.

“I choose to eat celery rather than drink it,” von Bertouch says. “It’s a fad that is not harmful, and can help you squeeze some extra nutrients into your diet, but the benefits are not as good as they seem – it is not a diet must have. A well balanced diet full of whole foods is the best way to go.”