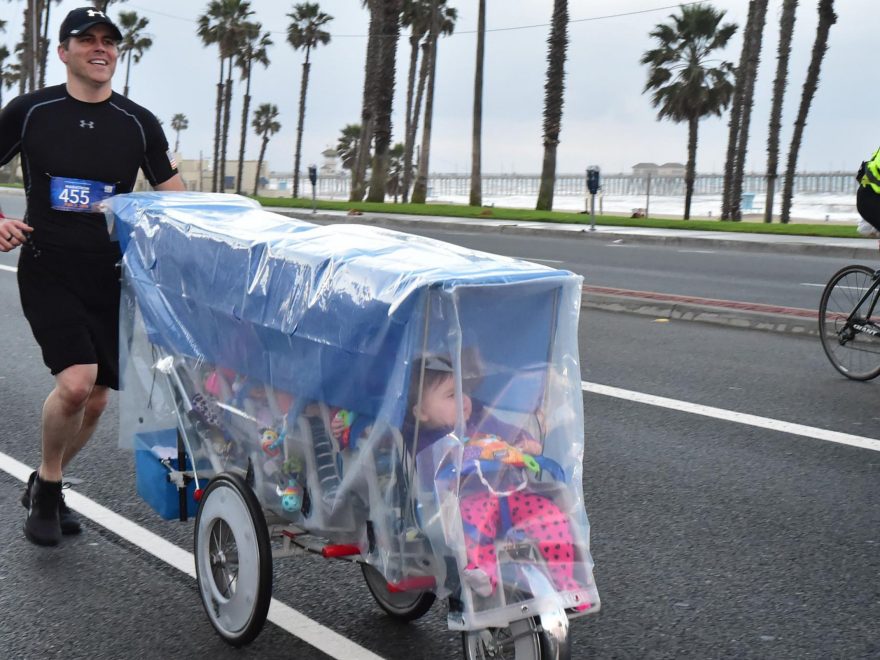 If you’ve ever wielded a stroller carrying a baby while running, you know just how awkward and difficult it can be. You can’t swing both of your arms freely at once, your stride is sometimes cut short, and no matter how “lightweight” the stroller’s packaging promised it would be, it’s a beast to push up hills.

Now imagine that you have to push not one, but five kids in one—and for 26.2 miles. That will give you an idea of what 37-year-old Chad Kempel experienced at the Surf City Marathon in Huntington Beach, California, on February 3.

Kempel is a father of seven—including 1-year-old quintuplets—and he pushed the five little tykes in a covered stroller all the way to the finish line.

“I never expected to push anyone in a marathon,” the native of Mountain House, California, told Runner’s World. “The hills were especially hard. But when I thought about what the babies went through in the past year—all those feeding and breathing tubes—that gave me strength to push through to the finish and then some. Anything is possible.”

Chad Kempel celebrates with his wife, Amy, and their seven children after finishing the 2019 Surf City Marathon.
Chad Kempel

The number had special meaning to the family: Amy had carried the quintuplets for 27 weeks and three days before giving birth prematurely on January 11, 2018. When the babies were born, they each only weighed three pounds, and had to be immediately treated with oxygen and feeding tubes to survive. The quintuplets’ fragile health conditions required them to stay in the intensive care unit for 73 days, Kempel said.

“It was a long, scary pregnancy, and even after they were born, we couldn’t rest,” said Kempel. “Finally, we were able to take them home, but then our schedules just got busier. It’s been a long, crazy year, between parenting and working and finding time to run.”

Finding a Respite Through Running

Running has been a mental and physical escape for Kempel since high school, when he started logging miles to get in shape for wrestling. As an adult, he lengthened his training runs, enjoying how pounding the pavement put his mind at ease. “It’s my preferred antidepressant,” he said. In 2009, he tackled his first marathon in San Francisco at age 27, finishing the race in 3:43:15.

“After that, I was hungry for a Boston qualifying time,” he said. “I knew I had a ways to go, but I was on the chase.”

A few years later, Kempel’s life took a dramatic turn. In 2013, he and Amy discovered they were expecting twins. But their joy was tragically short-lived, as the babies were born 18 weeks early and passed away.

“It was devastating,” Kempel said. Earlier in June of that year, he’d run his fastest 26.2-mile time to date, a 3:14:25 at the Newport Marathon in Oregon. But after losing the twins, the miles no longer held their appeal.

Soon, though, Kempel realized that running could help him get through the low days. He began training for and racing marathons again around the time his oldest daughter, Savannah, was born in 2014, often logging miles on the road each morning before he and Amy had breakfast with their baby. He continued this routine when they welcomed their second girl, Avery, two years later. But naturally, when the quintuplets arrived last year, the couple’s days got a lot more hectic.

To train for the Surf City Marathon, Kempel woke up each morning at 4, got dressed in a headlamp and reflective gear, then left the house at 4:30 to run.

He usually went for about an hour, sticking to routes nearby in case he needed to help Amy with any early risers.

“I didn’t want my training to be a burden to her,” he said. “She’s overwhelmed as it is.”

When their seven children woke up at 6:30, Kempel and Amy divided and conquered, with one taking charge of dressing the quintuplets and the other getting the older girls ready. While Amy drove Savannah and Avery to preschool, Kempel commuted an hour to work.

“I have to fit running in whenever I have time.”

At 4 p.m., he picked up his daughters, then met the rest of his family at home. After tucking the babies into their five cribs around 6 p.m., Kempel sometimes left for a second run.

“I have to fit running in whenever I have time,” he said.

While he put in enough miles and practiced fueling to be ready for Surf City, Kempel didn’t spend much time rehearsing one important thing: running with a stroller. It just wasn’t practical, since he did the bulk of his miles in the chilly pre-dawn hours. “I didn’t want the girls to get cold,” he explained.

He did do one test run a few weeks before the race, pushing the babies in the custom five-person stroller he purchased off eBay for five miles. He said it wasn’t too challenging—thankfully, the babies slept the entire way—but still, he didn’t know how 22 more miles would go.

Pushing Through the Wall

When race day arrived, any nervousness Kempel felt previously was replaced by adrenaline. On the Surf City starting line, he and Amy fed the five girls in the stroller, hoping they would be satiated until the finish.

Chad Kempel pushes his quintuplets over the finish line of the 2019 Surf City Marathon in Huntington Beach, California.
Chad Kempel

“My biggest concern was how many diapers I’d need to change,” he said. Luckily, the dad had the genius idea to dress each baby in two diapers, so when one was soiled, it could be quickly ripped off and the other could slide in place. “It was smooth sailing.”

While there were tough spots throughout the course, Kempel was buoyed by kind words from his fellow runners, he said.

From: Runner’s World US