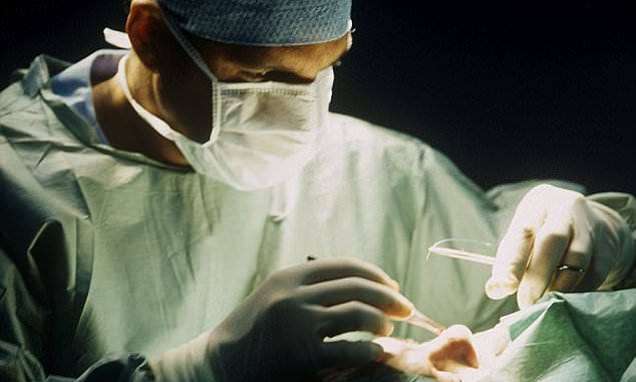 Why are SO many women getting follow-up nose jobs? Rise in botched ops and the falling trend of ‘pinched tips’ are driving millions patients back into the operating theater

Plastic surgeons are seeing a spike in people getting second nose jobs after being unsatisfied with their previous operation.

They say many patients return to their offices seeking a rhinoplasty to fix a new or uncorrected defect – almost the same reasons for why they had their first surgery.

Some have functional reasons due to botched operations, such as their nasal valve collapsing leaving them unable to breathe or their nose becoming crooked.

But surgeons say a surprising number are requesting procedures due to a mix of correcting procedures they got because they were trends a long time ago and influence from celebrities and social media.

According to the American Academy of Facial Plastic and Reconstructive Surgery, 94 percent of surgeons performed a revision in 2018.

‘The number of consults I see for revision rhinoplasties has at least tripled over the last five years,’ Dr Deepak Dugar, a board-certified plastic surgeon in Beverly Hills, California, told DailyMail.com.

‘Five years ago I used to see about five to seven a day. Now sometimes I’ll see between 10 and 15 a day.’

Dr Dugar and his colleagues, who are fielding more and more clients, warn that getting a revision rhinoplasty could potentially send patients down a spiral of wanting more and more surgeries to reach an unattainable perfection.

Plastic surgeons say they are seeing a rise in patients coming in for a revision rhinoplasty after being unsatisfied with their previous operation. Pictured: Rhinoplasty performed by New York-based surgeon Dr Norman Rowe 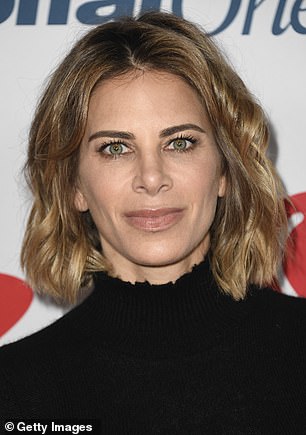 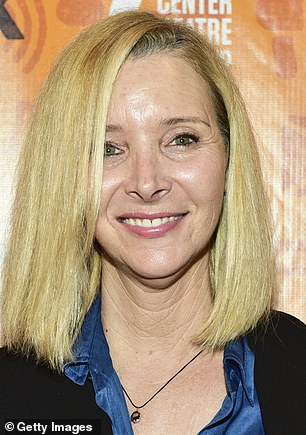 Experts warn that many patients are trying to emulate celebrities they seen social media. Some stars have openly praised their nose job including Jillian Michaels (left) and Lisa Kudrow (right)

Rhinoplasties are among the most challenging plastic surgery procedures performed.

It’s often referred to as the ‘procedure of millimeters’ because changing just one millimeter of the nose can impact its appearance.

‘The nose is one of the most complex areas of the face due to anatomy and blood supply,’ Dr Lara Devgan, a board-certified plastic surgeon based in New York City, told DailyMail.com.

‘The nose is in the center of your face, it’s closer to the selfie lens than any part of face, and it compromises parts of your identify and heritage.

‘People underestimate the complexity of surgical rhinoplasties. It seems like a triangle on a smiley face but, in fact, it hosts a whole bone support network.’

Therefore, it’s not surprising the satisfaction rates of patients after rhinoplasties are lower than the rates after other procedures.

A 2015 study from The Ohio State Wexner Medical Center found that 83.6 percent of people were happy with their results.

But a 2013 study from the American Society of Plastic Surgeons found that 98 percent of women were happy with their results.

‘You can’t put makeup it on like an imperfection on your eyes, or like you let your hair grow long to cover a scar,’ Dr Norman Rowe, a board-certified plastic surgeon in New York City, told DailyMail.com  ‘It’s the hardest surgery to get right.’

But the operations are still done in droves. 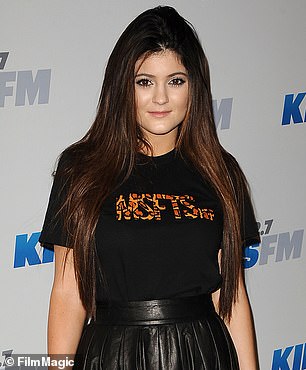 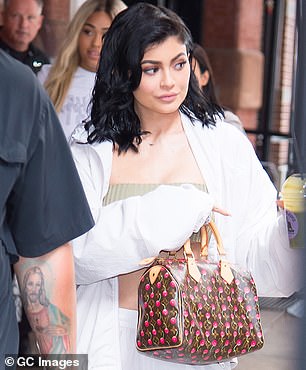 The satisfaction rates of patients after rhinoplasties are lower than the rates after other procedures. But, in 2018, rhinoplasties were the most popular procedure, performed by 96 percent of plastic surgeons, followed by revision surgery, which 94 percent performed. Pictured: Kylie Jenner in December 2012, left, and in April 2017, right 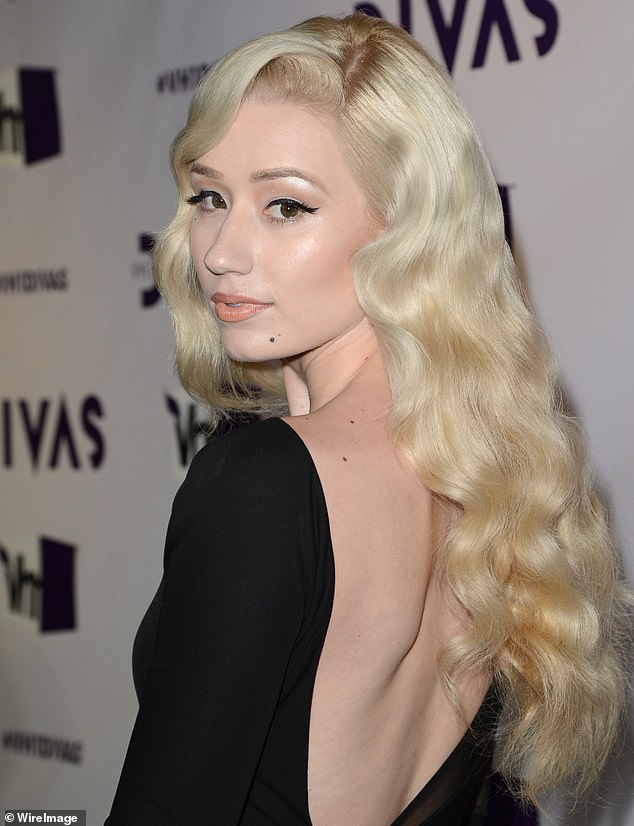 One surgeon told DailyMail.com the number of rhinoplasty revision consultations he’s seen has tripled from five years ago. Pictured: Iggy Azalea in December 2012

‘The growth of non-surgicals is pretty much exponential,’ ISAPS president Renato Saltz said.

‘The technology, the money invested in research and development, is just mind boggling. If you look at the industry, they don’t make money with a scalpel, but they do make money with machines.’

MOST POPULAR: BOTOX OR SIMILAR

In 2015, Botox injections were the most popular procedure with 4.6 million performed by plastic surgeons, followed by hyaluronic acid injections (2.9 million) to iron out wrinkles and plump up lips.

Surgical breast augmentation was in third place with 1.5 million procedures, followed by liposuction with 1.4 million and operations to lift and shape eyelids at 1.3 million.

ON THE RISE: OPERATIONS ‘DOWN THERE’

‘The demand is not there yet, but 10/15 years ago there was also no demand for female genital rejuvenation,’ said Bernard Mole, a Paris-based plastic surgeon.

Today it is among the most popular procedures, ‘and I believe that in five to ten years we will see the same trend in men.’

According to 2018 statistics from the American Academy of Facial Plastic and Reconstructive Surgery, rhinoplasties were the most popular procedure, performed by 96 percent of plastic surgeons, followed by revision surgery, which 94 percent performed.

According to Dr Dugar, most rhinoplasties that need revisions are being done by people who are not rhinoplasty experts or by ear, nose and throat doctors.

‘I would say 90 percent of people who end up with revisions didn’t do enough their homework the first time,’ he said.

‘When they come to see me and ask for a revision, and I ask who they went to, it wasn’t the best rhinoplasty surgeon in town.

‘It’s sad because revisions are so much more complicated.’

Dr Rowe says patients not doing adequate research on their surgeon the first time around is more common than wanting a revision rhinoplasty because trends have changed – and the numbers are rising.

‘From about five years ago, the number of revisions I see has increased by 25 to 30 percent,’ he said.

Dr Rowe added that years ago the ‘diamond tip’ – or pinched tip – noses was popular, but now he gets women coming in to see him who want to reverse it.

Surgeons have noted that many clients see celebrity selfies online – images of ageless stars with noses that seem perfect.

There are also those who admit to their plastic surgery and describe the process as life-changing.

Friends star Lisa Kudrow admitted to getting a nose job in an interview with The Saturday Evening Post.

‘I went from, in my mind, hideous to not hideous,’ she said. ‘That was a good, good, good change.’

And fitness legend Jillian Michaels told PEOPLE that she had a nose job when she was 16 years old after she was bullied over her appearance.

‘I’ll be honest, it did change my life,’ she said. ‘Not to say you should let your physicality define you, but there are some things that can make people feel really insecure.

But the doctors say they want to discourage patients from visiting their offices in the hopes of seeking surgery to look like a celebrity.

‘Patients often want to emulate somebody’s nose whether it’s someone they see on Instagram, YouTube or another social media outfit,’ Dr Stuart Linder, a board-certified plastic surgeon based in Beverly Hills, California, who focuses on body work, told DailyMail.com

‘Creating a nose like a celebrity’s nose is not impossible but it’s difficult. People have different facial proportions, different orbit of the eyes. The nose on one patient might not fit another.

‘A good rhinoplasty surgeon will tell [a patient] what looks good on their face.’

Dr Dugar says the other problem celebrities face is that they often influence their followers to not make the best choices.

‘Social media has given anyone a voice but people are trusting followers more than they’re trustign medical degrees,’ he said.

‘A celebrity will say: “This person is the best” and, because they have five million followers, they’ll agree with even if that’s not the case.’ 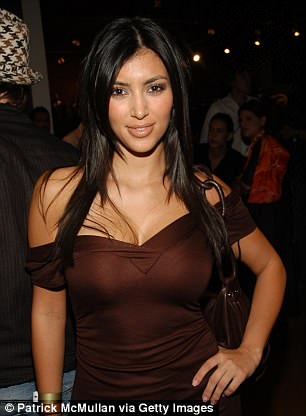 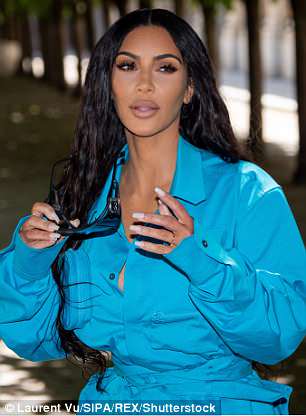 Doctors say they want to discourage patients from visiting their offices in the hopes of seeking surgery to look like a celebrity. They add that a nose on one celebrity will not necessarily look good on a patient due to different facial proportions. Pictured: Kim Kardashian, left in September 2006, and right in June 2018 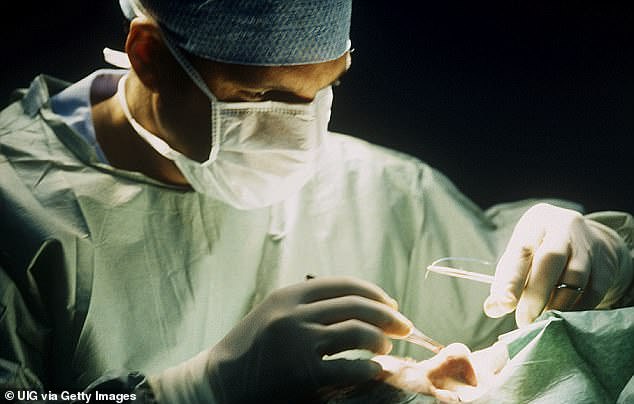 All the surgeons told DailyMail.com that if women aren’t having problems breathing following their nose job, they probably don’t need a revision (file image)

The doctors say there are a number of things to consider before someone undergoes a revision rhinoplasty.

The first is to wait at least 12 months or one year before having another operation.

‘The nose swells, which lasts for many months. It could take a year or longer to heal completely’ said Dr Linder.

‘The last thing a patient should do is say: “I’m going to go have another [rhinoplasty] in a short amount of time.” And a doctor willing to do it is very negligent.’

They also say to look for a board-certified, well-respected plastic surgeon.

Currently, 48 states legally allow doctors to perform plastic surgery even if they are not credited by the American Board of Plastic Surgery.

That means a dentist or an ophthalmologist in these states could legally perform a nose job.

Additionally, if you can’t or don’t want to go back to your original surgeon, they say go see somebody who specializes in revisions.

‘You should go to a revisionist,’ said Dr Linder. ‘You don’t want to just go to a fixer but a fixer of fixers.’

Lastly, and perhaps most importantly, the doctors say that if you are breathing well after your original rhinoplasty, you likely don’t need a revision.

‘Patients should expect improvement but not perfection with a rhinoplasty,’ said Dr Dugar.

‘I try to talk them out of [a revision] if it’s not as bad as they think. Otherwise, they’re on a crazy path of three, four, five, six surgeries changing some unattainable perfection they’ll never reach.’