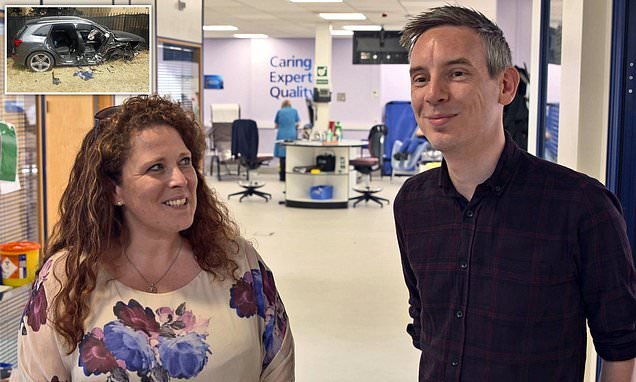 The number of men giving their blood in England has fallen by around a quarter over the last five years, figures show.

Men, who are more likely to be able to give blood than women, are being urged to register as donors to ensure the service maintains a safe supply. 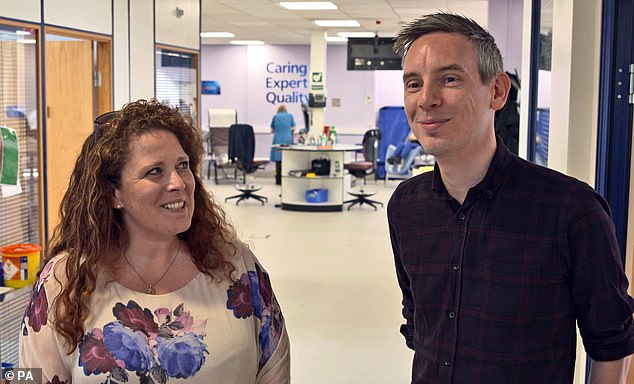 The appeal by NHS Blood and Transplant comes as a mother who survived a head-on collision said she owes her life to people who donate blood. Emily Pringle received blood from Karl Kellner, 34 (the pair are pictured together)

‘Men are more likely to be able to donate, and able to help more patients with each donation, so we need a new generation of young male donors to ensure our donor base is strong enough to keep supplying lifesaving blood to hospitals.

‘We can assure men out there that blood donation is an amazing experience that you can feel proud of.

‘Giving blood is quick and easy – we aim to have you in and out within an hour but the actual donation itself should only take around 10 minutes.’

Women made up nearly two-thirds (63 per cent) of new donors last year, compared to just 37 cent of men, the figures show.

And the number of female donors has dropped by just six per cent in the last five years. 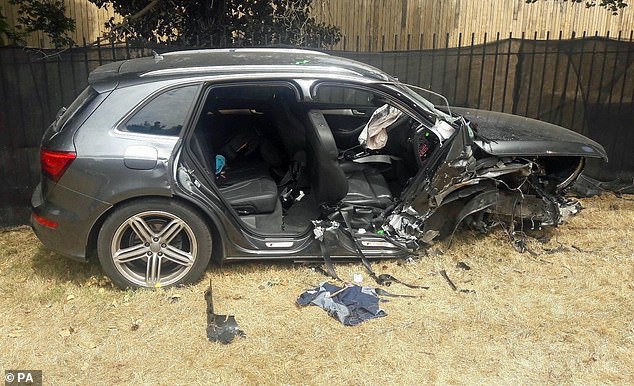 Ms Pringle, from Cheltenham, suffered 27 broken bones, ruptured an artery in her neck and lost litres of blood following the crash on the A40 in July last year

Male donors have higher iron levels than women and so are more likely to be able to donate, NHSBT said.

It is also easier to use their blood for products like plasma and platelets.

Women who have gone through pregnancy can have antibodies in their blood, which can make it harder to match with recipients.

NHS Blood and Transplant is appealing for new male donors near its 23 permanent centres, which are located across the country in cities including London, Manchester, Cambridge, Sheffield and Leicester.

The appeal comes as a mother-of-one who survived a head-on collision said she owes her life to people who donate blood.

Emily Pringle, from Cheltenham, suffered 27 broken bones, ruptured an artery in her neck and lost litres of blood following the crash on the A40 in July last year.

The 42-year-old was introduced to Karl Kellner, 34, whose blood was one of five units that helped to save her life, to raise awareness of the need for more male donors. 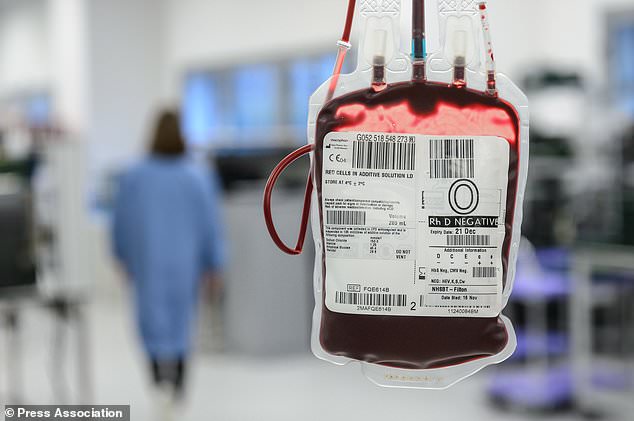 Mr Kellner, a married father from Stafford, had given blood a few days before the crash at a local donation session.

‘Your blood played a major, major part in keeping me alive and I am very grateful,’ Ms Pringle told her donor, as they met for the first time at a donation centre in Birmingham.

Mr Kellner, a graphic designer, said: ‘I was quite nervous before the meeting but it was an amazing experience to meet someone that you have helped. It was a very special day and one I will remember forever.

‘Every time I donate now, I will be thinking in the back of my mind that this is something that will change another person’s life.’

Ms Pringle added: ‘I owe people who donate blood my life. It’s as simple as that. It’s so important for people to donate regularly.’

WHAT HAPPENS WHEN YOU DONATE BLOOD?

Every day hospitals in the UK need a staggering 6,000 blood donations.

In order to meet this demand, an additional 190,000 new donors are needed every year.

At this time of year, hospitals are even more in need of donors as they face a ‘Christmas slump’, as people cancel appointments.

Figures show almost half of blood donors are over the age of 45 and 81 per cent of 18-24 year olds have never given blood.

A regular supply of all blood groups and types is needed.

Before you give blood

How you donate blood

When you are comfortable in the chair, a nurse will put a cuff on your arm to maintain a small amount of pressure during donation (this does not measure blood pressure).

They then examine your arm to find a suitable vein and clean it with an antiseptic sponge.

A needle will be inserted into your arm which will collect your blood into a blood bag with your unique donor number.

You should not feel any discomfort or pain. If you do, tell a member of staff.

A scale weighs the blood and stops when you have donated 470ml (or just under a pint). This usually takes between 5-10 minutes.

The needle will be removed and a sterile dressing applied to your arm.

Your donation is transported to one of our blood centres where it is tested and processed before being issued to hospitals.