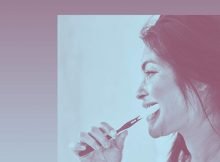 Brush, floss, and see your dentist regularly. Why? Certainly to save yourself from painful cavities and keep your smile looking bright—but also to stay cognitively sharp.

A new study published in Science Advances details new discoveries in dementia research. Namely, a type of bacteria called Porphyromonas gingivalis, or P. gingivalis, which is associated with periodontitis, has been found in the brains of patients with Alzheimer’s disease. Periodontitis is an advanced form of gum disease, or an infection of the tissues that support teeth, says the American Dental Association (ADA).

The research was conducted by Cortexyme, Inc., a privately held, clinical-stage pharmaceutical company, which says that the discovery is a step toward a drug that can effectively block the pathogen.

What’s more, in experiments on mice, the study authors note, oral P. gingivalis infection also spurred the production of amyloid beta, proteins that clump together and are the hallmark of Alzheimer’s disease. Lastly, they found that toxins released by P. gingivalis (called gingipains) were present in brain cells of those with Alzheimer’s. Essentially, Alzheimer’s may be, in part, a type of brain infection.

The company has developed an investigational drug called COR388. They’ve said that preclinical trials have shown that CORE388 treatment is brain-protective and reduces this P. gingivalis bacteria, the production of amyloid beta, and inflammation.

“Now, for the first time, we have solid evidence connecting the intracellular, Gram-negative pathogen, P. gingivalis, and Alzheimer’s pathogenesis while also demonstrating the potential for a class of small molecule therapies to change the trajectory of disease,” Stephen Dominy, MD, Cortexyme’s co-founder and lead author of the paper said in a press release.

This isn’t the first study to make the connection between gum disease and dementia. A review in 2017 in the journal Frontiers in Aging Neuroscience, for instance, pointed out another working hypothesis that it’s chronic inflammation from periodontal disease that encourages the development of Alzheimer’s.

The fact that scientists have a promising drug that targets this process is exciting, but it also points to something very simple you can do at home: Take care of your pearly whites. Other research shows that elderly individuals who have suffered tooth loss are more likely to also have mild memory impairment. And in a paper in Alzheimer’s & Dementia, New York University researchers pointed out that preventing periodontal disease is one lifestyle factor that may lower your risk for cognitive decline in your later years.

Nearly half of adults over 30 in the U.S. have chronic periodontitis, according to the ADA. Think about that for a moment: It’s not just something that can happen to you when you’re in your golden years. Your oral health habits matter now.

Gingivitis is the precursor to periodontitis, and the condition comes with warning signs that you can readily spot. Early signs include gums that are red, swollen, and bleed when you brush; at this point, you can still turn things around with proper oral hygiene and a trip to the dentist, which is why it’s so important to keep that regular appointment, according to the ADA. But once it advances, things can get so bad that you lose teeth. Want dentures as you’re older? We didn’t think so.

So, here’s what the ADA says you should do for proper oral hygiene: Brush twice a day with fluoride-containing toothpaste, floss (or use another type of cleaner to get to the spaces in between teeth), eat a healthy diet, and see your dentist regularly. That may be once, twice, or more often during the year—but that’s something you should chat with your dentist about.