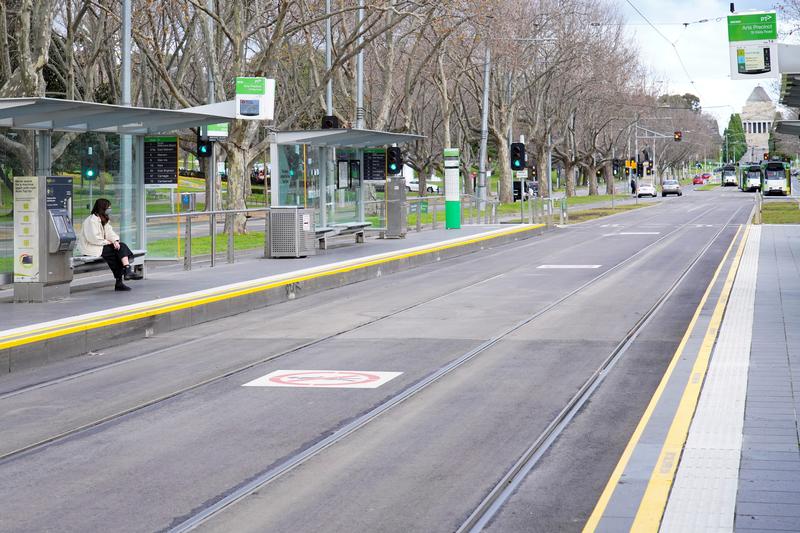 MELBOURNE (Reuters) -Sydney will get 50,000 more doses of the Pfizer vaccine this week to battle its worsening COVID outbreak, Canberra said on Saturday, reversing a rebuff by the Australian government and other states the previous day of a plea for more supplies.

FILE PHOTO: A lone passenger sits at a tram stop on a mostly-empty city centre street on the first day of a lockdown as the state of Victoria looks to curb the spread of a coronavirus disease (COVID-19) outbreak in Melbourne, Australia, July 16, 2021. REUTERS/Sandra Sanders/File Photo

Officials fear the outbreak could jeopardise the rest of the country.

New South Wales State Health Minister Brad Hazzard said the extra vaccine supply was urgently needed and was the only way to stop transmission of the virus, as people were not sticking to stay-at-home orders.

“At the moment it’s like fighting a war with both arms behind your back,” Hazzard told reporters.

New South Wales reported 163 locally acquired cases of COVID-19 on Saturday, up from 136 the previous day, with 37 patients in intensive care.

Hazzard renewed a call for other states to give up some Pfizer vaccines so that younger people in Sydney’s hotspots could be vaccinated, reminding neighbouring states about the help New South Wales had provided during other crises.

The health minister of Victoria state, Martin Foley, said it had no spare vaccine for New South Wales but fully supported the federal government sending them extra doses from a national stockpile, as they were clearly in greatest need.

Of the new cases in New South Wales, at least 45 had spent time in the community while infectious, state health authorities said. That figure is closely watched as the state weighs whether to extend a lockdown due to end on July 30.

A particular problem was the spread of the virus through family visits, Hazzard said. In one case, 18 infections were linked to a single gathering after a family tragedy, NSW Health director Jeremy McAnulty said.

“We really need our community, particularly in south western and western Sydney, to stay at home, to hear the message and stay at home,” Hazzard said.

Defying stay-at-home orders, thousands of mostly maskless protesters clashed with police in downtown Sydney, decrying the lockdown in what officials feared could turn into a superspreader event.

Victoria, which includes Melbourne, reported 12 locally acquired cases of coronavirus on Saturday, down from 14 a day earlier, in what Foley called a reassuring sign as the second most populous state weighs whether to lift a hard lockdown from Tuesday night.

Despite its struggle with spikes of infections, mostly of the Delta variant, Australia has managed to keep its epidemic largely under control with a total of about 32,600 cases and 916 deaths.