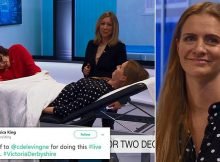 Viewers have praised the BBC for showing a woman having a cervical smear test live on air.

Chloe Delevingne – sister of the supermodel Cara – had her cervix swabbed on the BBC’s Victoria Derbyshire programme this morning.

The segment was shown as part of Cervical Cancer Prevention Week after alarming figures realised earlier this month revealed smear test uptake is at an all-time low.

Scroll down for video 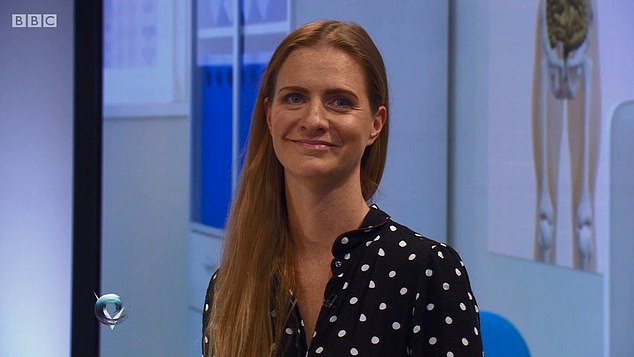 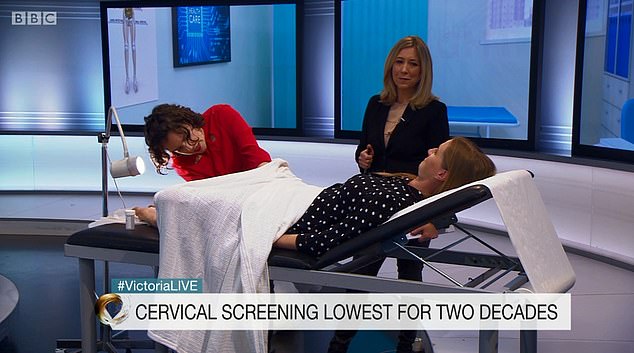 Chloe, a 33-year-old mother-of-two, admitted the thought of having a smear test – which aims to pick up abnormal cells that could lead to cancer if left untreated – was a bit ‘nerve-wracking’.

However, the straightforward procedure – carried out by GP Dr Philippa Kaye – took a matter of seconds.

Chloe, who was covered up for the test, described the sensation as being ‘odd’ but not painful.

In the hope of encouraging other women to attend their smear test, Chloe revealed she used to be scared by the thought of having it done.

But at just 20 years old, the socialite was found to have pre-cancerous cells and had part of her cervix removed.

‘If I had not have seen my doctor with certain symptoms [that I had], I may not have been able to have children,’ Chloe said.

Most viewers on Twitter were supportive of the decision to show a cervical exam live on air.

And Rob McDowall – chair of the non-profit organisation Welfare Scotland – said he hopes the move will encourage ‘apprehensive’ women to attend their smears.

‘Anything to improve screening rates,’ he added. 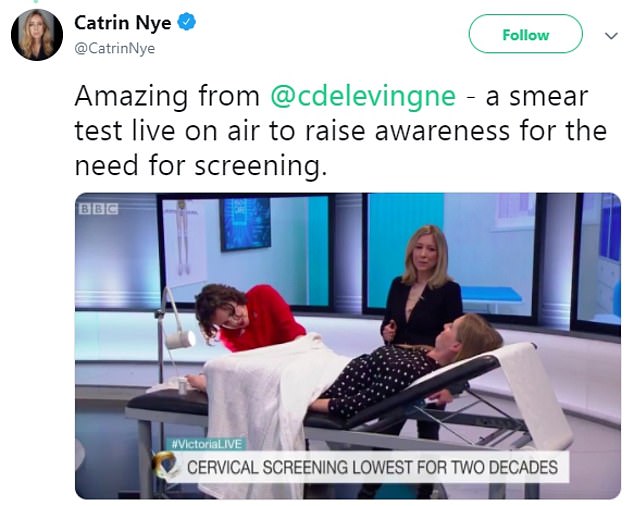 Kate Sanger praised the programme for ‘breaking down stigma and taboo’ around the test, which is routinely offered to all women on the NHS between the ages of 25 and 49

Stephanie Bosset also backed the programme, saying: ‘Great idea, helps demystify the process, making it less daunting for those maybe holding back from getting tested’ 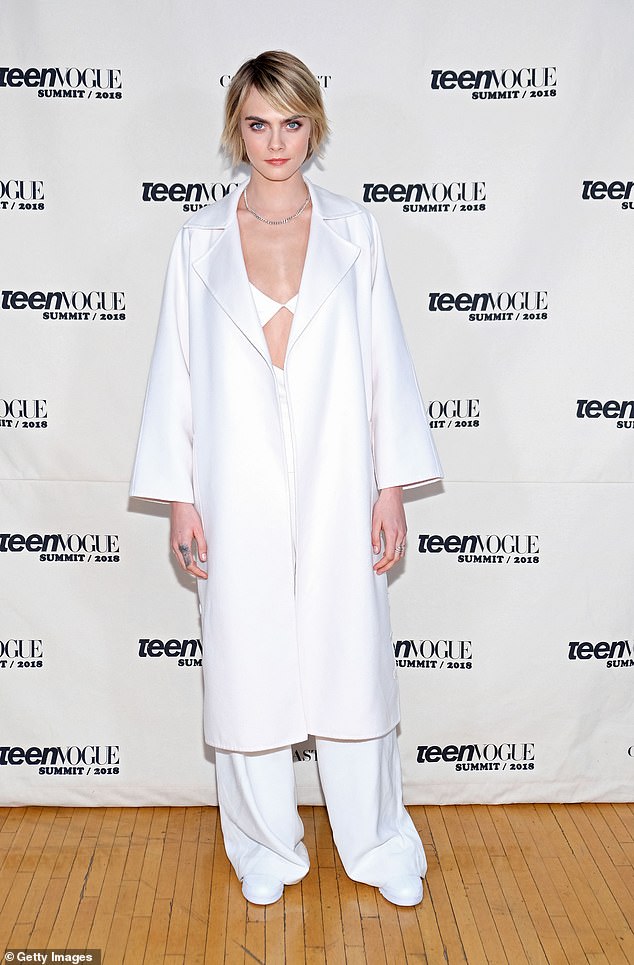 Chloe is eight years older than her supermodel and actress sister Cara Delevingne. Cara is pictured at the Teen Vogue Summit in LA on December 1 last year

CAMPAIGN FOR WOMEN TO HAVE THEIR SMEARS

Women will be told not to be afraid of having their smear test as part of a major NHS awareness campaign.

It follows widespread alarm at figures showing uptake of the cervical screening programme is at an all-time low.

The trend has been blamed on embarrassment, as well as a lack of GP appointments.

The new campaign, overseen by Public Health England, begins in six weeks’ time. It will involve adverts on TV and social media explaining the importance of smear tests.

Screening has been credited with saving an estimated 5,000 lives in the UK each year by detecting abnormal cells before they turn cancerous.

The campaign will also highlight risk factors for cervical cancer, including infection with the sexually transmitted HPV virus, smoking and taking the Pill.

The PHE campaign, Be Clear On Cancer, comes almost ten years after the death of Jade Goody on March 22 2009 from cervical cancer.

Cervical screening has been credited with saving around 5,000 women’s lives in the UK each year.

But the latest figures from NHS Digital show only 71 per cent of women are up to date on screening – with 4.95million being overdue.

This has dropped from a high of 75.7 per cent in 2011 – two years after reality star Jade Goody died from cervical cancer on March 22 2009 – and is at its lowest rate since records began.

Some 81 per cent of women admit to delaying the test because they feel self conscious of their bodies, according to Jo’s Trust – the cervical cancer charity.

The trust’s poll of 2,000 women aged 25-to-35 revealed 81 per cent are embarrassed about smear tests, 71 per cent are scared and 67 per cent report feeling a lack of control during the examination.

Around 3,200 British women are diagnosed with cervical cancer every year and 1,000 die with the disease annually.

But rates of the condition are set to rise by nearly 40 per cent in the next 20 years.

A medium sized speculum is typically used, which gets inserted into the vagina and then opened slightly to prop apart the vaginal wall.

Dr Kaye then stressed if the procedure is uncomfortable, the woman should tell her doctor so a smaller speculum can be used.

When it was time to start the test, Chloe – who is eight years older than Cara and two years older than their model sister Poppy – was asked to bring her knees up and make her feet into a diamond shape.

If this is uncomfortable, women can also have the test while in a foetal position – hugging their knees to their chest.

With the speculum in, Dr Kaye brushed some cells off Chloe’s cervix, adding some women experience a ‘period-like pain’ during this part of the procedure. 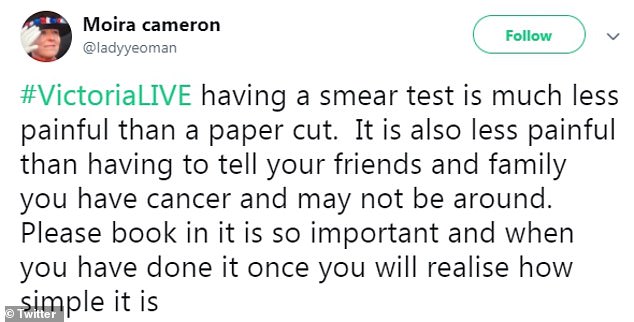 One viewer pointed out Jade Goody – who  died from cervical cancer at 27 in 2009 – may still be alive if she attended her smear tests. The reality TV star missed numerous appointments despite having previously received abnormal results and therefore being ‘at risk’

While working on her dissertation on cervical cancer, alarm bells started to ring.

‘My periods weren’t right – I was getting irregular bleeding and sometimes they were just not happening at all – and because of the research I was doing, I recognised that I needed to get checked out,’ she previously told MailOnline.

Although women registered with a GP in the UK are offering their first smear on the NHS aged 25, Chloe’s doctor arranged for her to have the screening at just 20 after she reported her unusual symptoms.

The results revealed Chloe had CIN 3 stage – severely abnormal cells on the surface of the cervix that can become cancerous.

She was immediately booked in for an outpatient procedure carried out under local anaesthetic to remove the affected area.

Chloe – who is a full-time mother to her sons Atticus and Juno – recovered quickly, with the seriousness of what she had gone through only dawning on her later.

‘These gynaecological cancers are called silent killers for a reason because often you don’t have obvious symptoms,’ she said.

WHAT IS A SMEAR TEST?

A smear test detects abnormal cells on the cervix, which is the entrance to the uterus from the vagina.

Most test results come back clear, however, one in 20 women show abnormal changes to the cells of their cervix.

In some cases, these need to be removed or can become cancerous.

Being screened regularly means any abnormal changes in the cells of the cervix can be identified at an early stage and, if necessary, treated to stop cancer developing (stock)

Cervical cancer most commonly affects sexually-active women aged between 30 and 45.

In the UK, the NHS Cervical Screening Programme invites women aged 25-to-49 for a smear every three years, those aged 50 to 60 every five years, and women over 65 if they have not been screened since 50 or have previously had abnormal results.

Women must be registered with a GP to be invited for a test.

In the US, tests start when women turn 21 and are carried out every three years until they reach 65.

Changes in cervical cells are often caused by the human papilloma virus (HPV), which can be transmitted during sex.

In January 2018, women shared selfies with smeared lipstick on social media to raise awareness of the importance of getting tested for cervical cancer in a campaign started by Jo’s Cervical Cancer Trust.