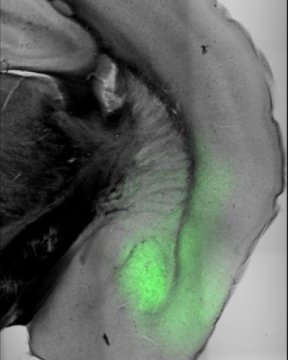 Our actions are driven by “internal states” such as anxiety, stress or thirst — which will strongly affect and motivate our behaviors. Not much is known about how such states are represented by complex brain-wide circuits, including sub-cortical structures such as the amygdala. In a study recently published in Science, the group of Andreas Lüthi at the Friedrich Miescher Institute for Biomedical Research (FMI) used a deep brain imaging technique to monitor amygdala activity in active mice and revealed the neuronal dynamics encoding behavioral states.

When a mouse is hungry, it is going to forage for food; when it is anxious, it is going to stop exploring its environment and freeze or flee. How such internal states correlate with the behavior of an animal has been studied in detail. However, little is known about how the brain encodes and controls internal states.

Jan Gründemann, a SNF Ambizione Fellow in Lüthi’s group and now a professor at the University of Basel, joined forces with Yael Bitterman, a computational neuroscientist working as a postdoc in the Lüthi group, to investigate the neuronal activity in the amygdala of freely moving mice in various states. The amygdala is a small almond-shaped brain structure that is considered a hub for regulating affective, homeostatic (hunger and thirst) and social behaviors via widespread connections with many brain regions. The amygdala is suggested to play a role in the coordination of brain states, but that role is not well understood.

Using a miniaturized microscope imaging technique, Gründemann and Bitterman tracked neuronal activity in the amygdala of mice across different environments that prompted various internal states and behaviors. The results were rather unexpected: The researchers identified two large antagonistic sets of neurons — called ensembles — that were active in opposite behavioral states: When the mice were exploring their environment, neuronal ensemble 1 was active; when they were not exploring (meaning that they were in non-exploratory defensive states), neuronal ensemble 2 was active.

Surprisingly, the activity of the ensembles did not align with spatial areas generally associated with anxiety states such as the safe corners in an open field. Furthermore, the scientists did not expect that complex internal states and their behaviors would be coded with relatively simple, low-dimensional activity patterns in the amygdala. In summary, the study shows that the identified two neuronal ensembles encode opposing moment-to-moment state changes, especially regarding exploratory and defensive behaviors, but do not provide a measure of global anxiety levels of an animal.

“The power of this study is that we managed to interrogate the brain directly about the affective state the mouse is in,” says Lüthi. “If we want to understand a behavior, we need to understand the brain! Drawing conclusions simply based on standardized behavioral observations may be misleading — as we could show.” As a next step, the Lüthi group wants to find out more about how these active ensembles emerge in the amygdala, and how they can influence other regions in the brain.

Can these findings be relevant for human anxiety disorders? “The coding of internal states — such has anxiety — may work in a similar way in humans than in mice,” says Lüthi. “It’s conceivable that in a person with an anxiety disorder there is an imbalance between neuronal ensembles coding for distinct internal states. It will be interesting to test this hypothesis in animal models for psychiatric diseases.”