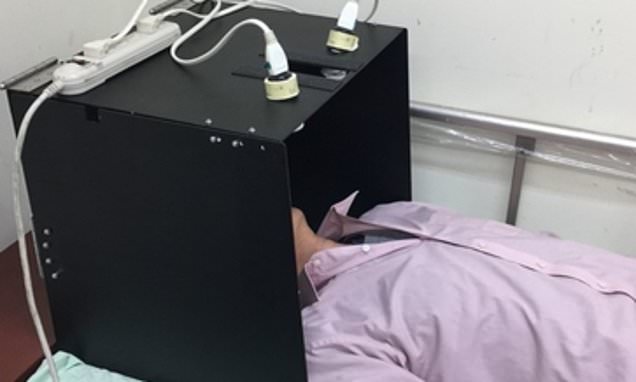 A 30-second selfie video shot from an iPhone may be able to predict if you’re at risk of a stroke, study finds

You’ve noticed the camera on your phone get exponentially better over the years.

But it might now be good enough to save your life — by spotting whether you’re at risk of a stroke.

Researchers have developed an algorithm that assesses the width of the arteries in your neck.

The programme works by scanning a 30-second video of someone’s neck, taken from a modern smartphone.

Narrowed arteries in the neck – known medically as carotid artery stenosis – is one of the main causes of strokes.

Participants were made to lie down on their backs and put their heads in a box while a mounted mobile phone filmed them.

The algorithm spotted nearly nine in 10 patients who had narrowed arteries and were therefore at risk of a stroke.

Currently symptoms like high blood pressure or high cholesterol need to be spotted before a patient is sent for a scan. 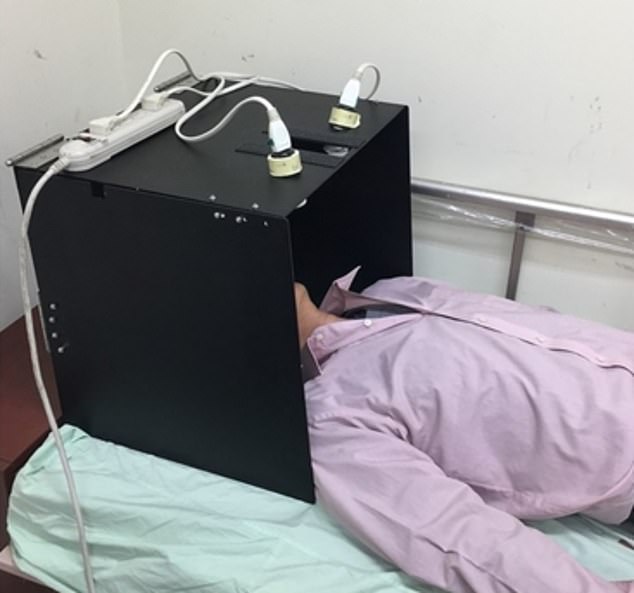 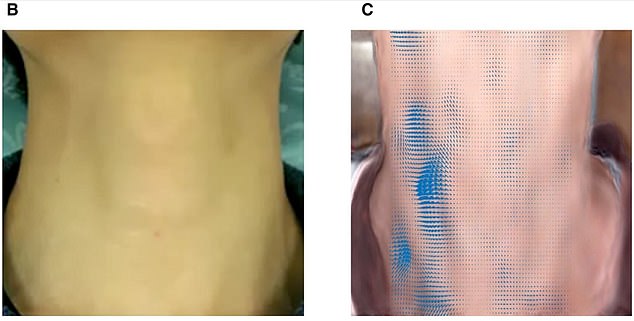 This footage was run through an algorithm that looked for tiny changes to the skin, impossible to discern with the naked eye, that could indicate the blood supply to the brain was under strain, highlighting them pixel by pixel in blue

There are two major kinds of stroke:

An ischemic stroke – which accounts for 80 per cent of strokes – occurs when there is a blockage in a blood vessel that prevents blood from reaching part of the brain.

The more rare, a hemorrhagic stroke, occurs when a blood vessel bursts, flooding part of the brain with too much blood while depriving other areas of adequate blood supply.

It can be the result of an AVM, or arteriovenous malformation (an abnormal cluster of blood vessels), in the brain.

Thirty percent of subarachnoid hemorrhage sufferers die before reaching the hospital. A further 25 per cent die within 24 hours. And 40 per cent of survivors die within a week.

Age, high blood pressure, smoking, obesity, sedentary lifestyle, diabetes, atrial fibrillation, family history, and history of a previous stroke or TIA (a mini stroke) are all risk factors for having a stroke.

SYMPTOMS OF A STROKE

Of the roughly three out of four people who survive a stroke, many will have life-long disabilities.

Both are potentially fatal, and patients require surgery or a drug called tPA (tissue plasminogen activator) within three hours to save them.

The video diagnosis method was ‘easy to perform’ so it should be feasible to develop a phone app that can boost stroke screening and save millions of lives, he said.

Current methods for assessing stroke risk use expensive scanners like ultrasound, CT, and MRIs, which need dedicated equipment and staff.

But the authors said this could be cut down to a doctor just using a smartphone and using an app to get a diagnosis within just five minutes.

Strokes are a life-threatening emergency where blood supply to part of the brain is cut off.

They are one of the leading causes of death and disability in both the UK and the US.

Ischemic strokes, which account for some 85 per cent of all strokes, are caused by a blood clot in the arteries that supply the brain, starving it of oxygen.

These blood clots are typically caused by a build-up of a fatty plaque inside the arteries that then break loose and cause a blockage. This can cause permanent disability and even death.

Dr Kao, a cardiologist, said better and earlier detection of those at risk of a stroke is vital.

As it stands, between 2 and 5 per cent of strokes each year occur in those who have no symptoms.

Around half had significant carotid artery stenosis — meaning their arteries were narrowed to half their size due to a build-up of fatty deposits.

The others did not have this problem.

For the experiment, each participant lay on their back with their head in a box that limited movement.

An Apple iPhone 6 was mounted to the box and filmed a 30-second video recording of their neck.

The clips were then run through a video motion analysis algorithm that examined the skin surrounding the arteries in the neck pixel by pixel, looking for tiny signs they were straining to supply blood due to a build-up of fat.

The findings, published in the Journal of the American Heart Association, show the videos detected 87 per cent of the stenosis cases.

‘With this method, clinicians may be able to record a video of the patient’s neck with a smartphone, upload the videos for analysis and receive a report within five minutes.

The researchers noted that the study only involved a small number of participants.

Another type of stroke is haemorrhagic, which occurs when a blood vessel bursts, flooding part of the brain with too much blood while depriving other areas of adequate blood supply.

Stroke rise generally increases with age as the arteries naturally narrow, but several lifestyle factors can speed up this process.

Smoking, poor diet, and a lack of exercise can all increase stroke risk by contributing to high blood pressure and high cholesterol levels.