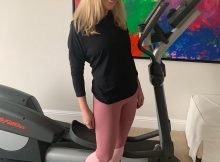 In an Instagram on Tuesday, the Real Housewives of Orange County star, 54, showed off her weight loss almost two years after she realized she’d gained 40 lbs.

“Getting there…” the reality star captioned the post alongside the punching-fist emoji and the hashtags, #rhoc, #season14 and #startingsoon. Season 13 of the original Real Housewives finished airing on Dec. 9.

Ahead of filming season 14, a source tells PEOPLE, “Shannon’s been working really hard over the past few months to get to her goal weight,” adding that “she’s been really dedicated on her fitness and wellness — and is pounds away from getting back to where she was before she gained the weight.”

“She looks amazing, and is feeling amazing, too,” the insider continues. “It’s like emotional weight has been lifted off her as well. This next chapter of her life is going to be amazing for her.”

Beador’s pride in her health comes as a result of all her hard work after she gained 40 lbs. reportedly from stress eating — which she revealed in July 2017 during season 12 of the series.

In the PEOPLE exclusive clip, she stepped on the scale and learned not only how much weight she’d gained but also that she was on the fast-track for diabetes, heart disease and obesity.

The emotional scene went down when the mother of three visited Tim Ramirez, DC, a holistic specialist whose chiropractic work and sports exercises helps his clients achieve a healthy body.

“I’m ready to lose the weight. I mean, Tim it’s not normal. I’ve gained so much weight in a year. I got stressed,” Beador told him — explaining how false allegations that her husband David Beador was physically abusive pushed her to eat more. “I didn’t want to hurt David because we both have been through enough.”

After telling Ramirez she was done letting other people affect her, she stepped on the scale.

By the fall of 2017, Beador was already showing off the results of her hard work, revealing at the season 12 reunion that she’d lost 25 lbs.

Though she’s feeling strong now, Beador said her weight gain made her feel insecure when the RHOC cameras were rolling.

“I have to tell you when the season started filming, I didn’t want to film. I didn’t want to be in front of the camera. It was like, ‘Oh my God, everyone’s going to see how I’ve let myself go,’ ” Beador recalled.

“You feel crappy about yourself. And I know there’s a lot of women who say, ‘You’re not that big’ or you know ‘I’m bigger and you’re making too big of a deal out of it.’ And I apologize to those women, I didn’t meant to offend anyone. But for me, I’ve always been a size 2 or 4. So for me personally, this was just a huge change.”