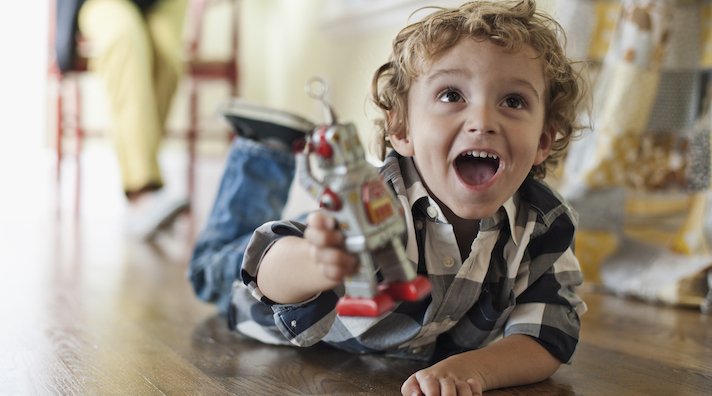 It’s no secret robots have caught the hearts and minds of children for decades — whether in sci-fi novellas or on the silver screen. Now, robots are also coming to pediatrics care.

“If you look at pediatrics and robotics systems, most children are attracted to robotics. So what does this mean? I can bring in a robotic device and I don’t have to convince you. I can bring it in and say, ‘Hey, this is a robot therapist, this is a robot doctor,’ … and there is not this apprehension of ‘Oh, I’m going to the doctor,’ or ‘I’m going to the therapist,’” Ayanna Howard, professor of robotics at Georgia Tech, said during her presentation at HIMSS19 in Orlando. “Instead they say “Oh, it’s a robot, what do I do?’ So we actually don’t have to fight this negative connotation of ‘Oh, you have a disability and you are going to go to the doctor or do therapy.’ Robotics is an easy sell.”

Artificial intelligence and robotics systems are often able to help gamify therapies for kids. Howard’s work centers around kids with cerebral palsy and autism spectrum disorder, and said that the technologies can enable kids with different levels of abilities to participate — for example, a gamified robotic system can be moved with the tap of a finger or by eye movements.

“It levels the playing field of what it means to have a disability,” Howard said.

But it’s also important to quantify the outcomes and prove that the technology is addressing the medical needs of the child.

“Did we have positive outcomes, are there changes? Is this system just a game? Or is there some medical benefit, is there some healthcare benefit?” she said.

Howard and her team set up an eight-week study with typically developing kids and children with cerebral palsy to test out a gamified, virtual reality robotics therapy.

“We have continued this on and we are at about hundred kids and it shows that when you design a VR system and a robotics system to interact with these kids, we could actually improve outcomes,” she said.

While the results are positive, there are also some concerns in the industry.

“We want to ensure that when you have a technology that is brought into the home that there is also not a dependency. The one thing we don’t want to do is bring in these AI systems to the home and the child requires that robotic system to be there in order to have improvement,” Howard said.

So her team did another study to examined what happened when the robot was removed. The researchers found that children with the robot regressed after the robot was taken away.

“When the robot is present both typical kids and children with motor disabilities improve. With the robot there, even the typical child is moving faster and having straighter line motions,” Howard said. “But when we remove the robot we see there is a decrease, i.e. when that system is no longer a part of the child’s life, the child decreased — not according to their baseline, but their improvement decreases. So as a researcher this is a little bit of a concern because we don’t want to create a reliance on this technology. … We need to figure out how to design technology such that you still enhance those outcomes even if the robot and AI systems isn’t present.”

Another challenge that Howard touched upon was the fact that both adults and kids have a tendency to trust robots more than humans. Howard’s research also showed that children reported feeling less stressed working with a robot for therapy than a human. This can be dangerous because even if a particular robot may have more accurate information than a human, they aren’t perfect.

“We also have to think about the fact that individuals are over-trusting them in some cases,” Howard said. “This is one of the fears we have as developers of this technology — ensuring that technology is adopted but is done in a safe and reliable way.”

Nevertheless, Howard said the industry will push forward in the robotics space.

“We are going to continue making sure that it addresses the needs and improves outcomes of kids and individuals in the home environment, augmenting the abilities of the human,” she said. “This is our goal and the goal of most robotics to have an impact on society.”