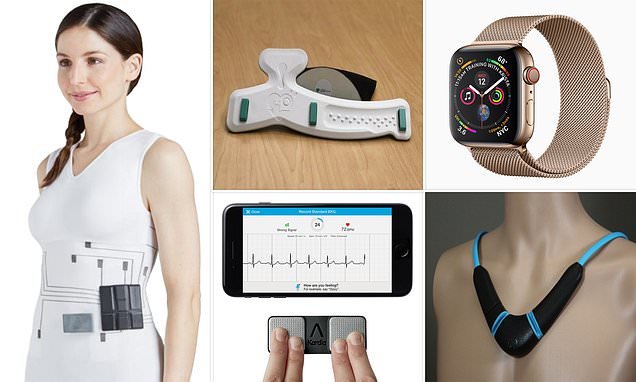 A T-shirt that tells you your heart is in trouble, an ECG by phone uses your fingertips and the two-minute warning necklace… some of the wearable gadgets that could save your life It can order a pizza, fire up your heating and create personalised exercise plans. Now, thanks to a ground-breaking development in wearable technology, the Apple Watch could also save your life.

Research unveiled last week showed that the latest version of the Apple’s wrist watch can detect irregular heartbeats that cause strokes and sudden cardiac death.

In tests, the fourth generation of the device’s software, which is now available to download in the UK, accurately spotted the potentially deadly condition, called atrial fibrillation, via in-built heart-rate sensors.

The watch uses infrared light to measure the volume of blood passing through the arm and converts it into a heart rate by using a special algorithm. .

Experts are hailing it a lifeline for the millions of Britons at risk – and it is just one such new arrival.

Scientists are now replacing Fitbit-style gadgets that merely track heart rate with ones that can actually diagnose hidden cardiac problems. From heart monitor T-shirts to ‘smart’ selfies, here’s the ultimate guide to the futuristic gadgets that can tell if your heart’s in trouble.

The EGC by phone that only needs your fingertips

Anyone who’s had an ECG (electrocardiogram) in hospital knows how cumbersome it can be – the patient’s top is removed and up to 24 electrodes stuck all over the torso, each with leads attached, to measure the heart’s electrical activity.

But what if you could do it in the comfort of your own home, using just your smartphone?

The KardiaMobile device is a pocket-size gadget with two metal ‘pads’ on it. The patient first opens the smartphone app that goes with it, places the gadget next to the phone and puts the tips of their index finger and middle finger on each pad.

In just 30 seconds, the pads can measure electrical signals and beam the results to the phone app, which instantly says whether the heart beat is normal, or whether atrial fibrillation has been detected. 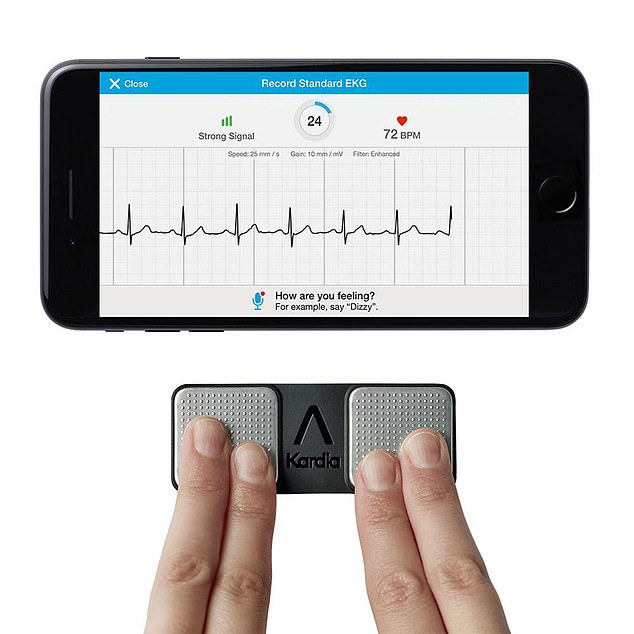 The KardiaMobile device uses two metal pads, pictured, to determine whether a patient has an irregular heart beat, showing the results on their mobile phone using a special app This top knows when your’re about to faint

Cardioskin is a washable T-shirt that could help detect potentially dangerous heart rhythms – including atrial fibrillation.

It can also spot other problems linked to faulty heart rhythms such as syncope, a condition that results in frequent episodes of fainting.

It has 15 electrodes stitched into the fabric that carry out round-the-clock checks on the heart by tracking the electrical signals the heart generates as they travel across the torso.

A chip in the shirt sends the results to an app on the patient’s smartphone and data can be shared with a cardiologist.

The shirt, from French drugs company Servier, could be in the UK within the next year. The HeartGuide smart watch takes your blood pressure without any discomfort

Most at-home blood-pressure devices need a ‘sleeve’ that wraps round the upper arm, like the one in the GP surgery.

But the HeartGuide smart watch does the same job without any uncomfortable arm pressure.

It has a built-in cuff under the strap that inflates subtly around the wrist and tracks blood pressure 24 hours day, beaming the results to a smartphone app.

Hard-to-spot abnormal heart rhythms could become easier to pick up thanks to a belt developed by Cambridge scientists.

Called HeartSense, the plastic band goes around the chest rather than round the waist and incorporates a heart monitor that can detect irregular and dangerous patterns such as atrial fibrillation.

A prototype is expected to be available in two years. The HeartSense, pictured goes around the patient’s chest and can detect irregular and dangerous patterns such as atrial fibrillation

This plastic necklace picks up the early telltale signs of heart failure.

The gadget sends data via wi-fi or Bluetooth to a specialist and users only need to wear it for two minutes to get accurate readings. This necklace, pictured, picks up the early telltale signs of heart failure

Spot irregular beats… with a shot of a finger

Called FibriCheck, it works when the user switches on a downloaded app, then places one finger over the camera lens.

Using a technique called photoplethysmography, which deploys light to measure changes in tiny blood vessels in the fingertip, the app monitors heart rhythms for signs of abnormalities.

FibriCheck is expected to become available in the UK later this year on subscription. 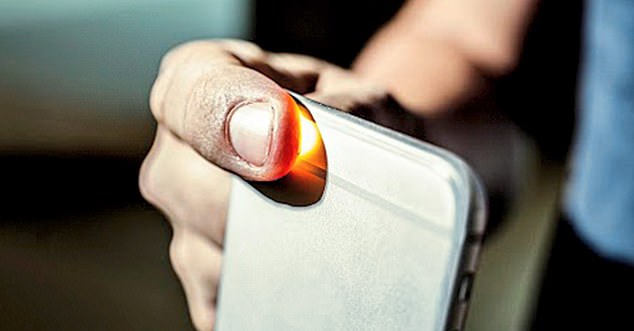