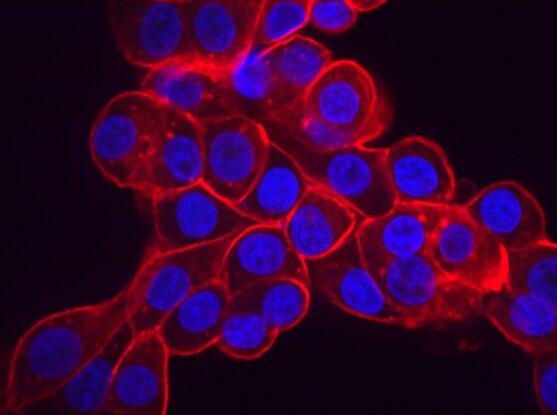 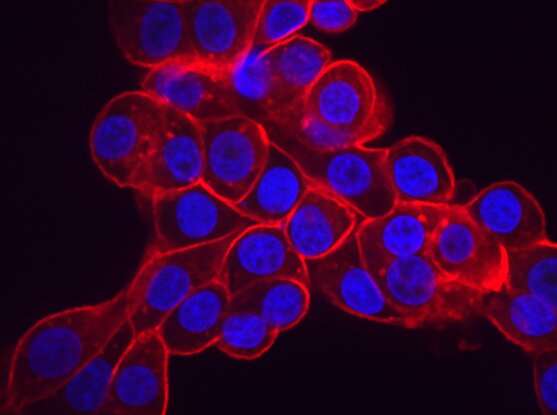 Although the outlook for people with some types of cancers has improved in the past 20 years, outcomes for patients with uterine and ovarian cancers remain much the same. Patients often have advanced disease before they are diagnosed, and genes that drive tumor formation have proved difficult to target with new treatments.

Now, researchers from the Cancer Dependency Map (DepMap) project at the Broad Institute of MIT and Harvard have identified a hidden vulnerability in ovarian and uterine cancers—as well as a way to exploit it that could inspire new, much-needed drugs for these cancers.

A team led by institute director Todd Golub and DepMap director Francisca Vazquez studied 851 human cancer cell lines to look for genes that uterine and ovarian cancers heavily rely on to survive, known as dependencies. Scientists already knew that uterine and ovarian cancer cells have high levels of a protein called SLC34A2, which imports phosphate into cells. Golub’s team disabled another protein in these cells, called XPR1, which exports phosphate out of cells, and found that this killed them. The results, published in Nature Cancer, suggest that the XPR1 gene is a genetic vulnerability in these cells and that phosphate buildup could be toxic to cells. The team adds that disrupting phosphate transport in cancer cells, such as with a protein they used to disable XPR1 in their experiments, could be an effective treatment strategy.

“Patients with ovarian cancer are in desperate need of better therapies, and this XPR1 finding is both surprising and exciting as a starting point for drug discovery,” said Golub, who co-led the project. “The challenge now will be to convert this discovery into a therapeutic strategy.”

“This is another great example of a new cancer vulnerability identified by the Cancer Dependency Map that could not have been identified just by sequencing genomes,” said Francisca Vazquez, who was a co-senior author on the study. “It’s another step towards our goal of mapping the entire landscape of cancer vulnerability.” Co-first authors Daniel Bondeson and Brent Paolella said that the Cancer Dependency Map allowed them to illuminate biological pathways and open up new questions in an unbiased way.

“The idea that phosphate homeostasis is something you can target in cancer is something that no one has appreciated before,” said Bondeson, a postdoctoral researcher in Golub’s lab.

“In the end, we learned about some fundamental underpinnings of cellular biology,” added Paolella, who was a senior research scientist at Broad when the study began. “But we’ve also found opportunities for therapeutic development. And that’s a good example of what you can do with the Dependency Map.”

Phosphate—a single phosphorus atom surrounded by four oxygen atoms—is essential for life, present in the mineral in bones and teeth and the backbone of DNA. Although previous studies showed that ovarian cancer cells have abnormally high levels of the phosphate importer protein SLC34A2, the protein is present in other tissues such as the lungs and intestines, so targeting it with drugs could cause side effects.

To find a better target for future therapeutics, the team focused on finding a vulnerability that is unique to uterine and ovarian cancer cells. They combed through the DepMap’s CRISPR screens, which show the effects of disabling key genes in cancer cells. Among 851 cell lines, they observed that uterine and ovarian cancer cells were more likely to die than other cells when XPR1, which encodes the only protein known to export phosphate from cells, was turned off. In particular, cells with inactivated XPR1 died only if they also imported large amounts of phosphate. Moreover, in these cells, the one other molecular feature most frequently found was high levels of the importer protein.

Next, Golub’s team found evidence of some correlation between phosphate importers and exporters in archived patient data.

This relationship, Bondeson and Paolella said, suggested a clear hypothesis: that the buildup of phosphate itself was toxic.

Back in the lab, the team tested their theory. In ovarian and uterine cell models, they found that cells relied on XPR1 to survive when they had high expression of the importer gene. And when they disabled XPR1 or inhibited it with a protein, cells accumulated phosphate, grew more slowly, and ultimately died.

The scientists said the protein they used to inhibit XPR1 could, with further development, be a potential treatment for these cancers, and Golub’s lab will continue to investigate if such proteins are a viable therapeutic strategy.

“Some genetic dependencies of ovarian cancer are difficult to target with drugs, but we showed we can actually use a protein to target XPR1 and kill the cancer cells,” Bondeson said. “And that’s really exciting.”

The team also observed that XPR1 dependency was strongly correlated with dependency on another gene called KIDINS220, which is involved in neural development but hadn’t previously been linked to phosphate transport. The researchers think that XPR1 and KIDINS220 come together to form a protein complex involved in transporting phosphate out of cells. That connection offers up a wealth of other scientific questions: Could KIDINS220 also be targeted by new drugs? And do diseases linked to KIDINS220 involve problems with phosphate regulation?

Bondeson and Paolella said that the involvement of KIDINS220 in phosphate transport suggests there is much to learn about how XPR1 and KIDINS220 interact with each other and with phosphate—and, more fundamentally, that there are still profound gaps in scientific understanding of how cells sense, regulate, and store phosphate. They added that how exactly phosphate buildup kills cells needs to be clarified. For instance, they noticed unusual membrane-enclosed sacs in microscope images of phosphate-loaded cells. They don’t know if those sacs, or vacuoles, store extra phosphate or are a sign of impending death.