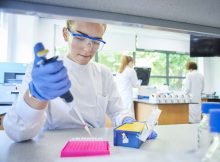 Cancer has many sly ways in which it tricks the immune system into sparing it or even into boosting its spread.

One such way involves the so-called myeloid cells. These are a key weapon in the immune system’s armory. Myeloid cells are both crucial for the body’s innate immune response and its adaptive response against a wide range of pathogens.

In theory, myeloid cells should attack invaders such as cancerous cells. But the latter trick the former into “thinking” that cancer cells are actually a part of the body that something has damaged. As a result, the tumor cells rope the myeloid cells into helping them divide and grow.

A team of scientists, however, has now found a way to thwart cancer’s plans. New research, appearing in the journal Nature Communications, reveals a novel target for immunotherapy, which can stop cancer from recruiting myeloid cells.

Vineet Gupta, Ph.D., a professor and vice chairperson for research and innovation in the Department of Internal Medicine at Rush Medical College in Chicago, IL, jointly led the new research with Judith Varner, Ph.D., of the Moores Cancer Center at the University of California in San Diego.

How cancer tricks the immune cells

Using two types of genetically modified mice, the researchers unraveled the mechanism by which cancerous cells deceive the immune system.

However, the research revealed that cancerous cells interfere with the activity of CD11b and, instead of turning myeloid cells into M1 macrophages, they turn them into M2 macrophages.

Instead of suppressing tumor growth, M2 macrophages boost this process. They do so by keeping at bay immune T cells — which are crucial in warding off disease — and by secreting growth factors that fuel cancerous cells with new blood vessels, enabling them to receive nutrients and grow faster.

Previous research in immunotherapy, the professor continues, has shown that drugs that activate T cells can be “extremely effective in controlling tumor growth.”

However, this approach does not seem to work for all cancers, which motivated the scientists to continue to search for ways to improve immunotherapy.

In the new study, Prof. Gupta and his team looked for an agent that would enhance the activity of CD11b in order to stop myeloid cells changing into M2 macrophages.

Firstly, they studied the effects of CD11b deprivation in mice and, as they expected, found that transplanted tumors grew much faster and larger in mice without the gene for CD11b.

Also, the majority of myeloid cells in the tumors of these rodents were M2 macrophages.

Next, the scientists developed and used a molecule called Leukadherin-1 (LA-1) to boost the activity of CD11b. Increasing this protein drastically reduced tumors in the mice receiving the treatment.

The researchers also engineered mice with a so-called point mutation to strengthen their findings — and to make sure the newly developed molecule was indeed suppressing tumor growth by acting on CD11b. The point mutation made CD11b stay active all the time.

“The boost in CD11b activity in the mouse with the point mutation mimics the one imparted on CD11b in normal mice with administration of LA-1,” Prof. Gupta reports. “The results were the same.”

In each situation, the tumors shrank drastically, potentially meaning that activating CD11b is a valid new drug target in cancer immunotherapy.

LA-1, the molecule the researchers designed, is one such promising drug, say the scientists. However, they caution that it may take years before the molecule translates into a widely available safe treatment for cancer.