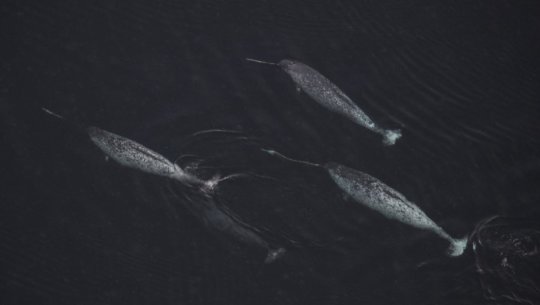 Narwhals — enigmatic arctic whales known for their sword-like tusk — spend over half their time diving to find food but are also able to last up to three days without a meal, according to a study by Manh Cuong Ngô and colleagues from the University of Copenhagen in Denmark, published in PLOS Computational Biology.

Narwhals are deep-diving whales that feed on halibut, cod and squid. The researchers analyzed 83 days of continuous tagging data from a single male Narwhal (Monodon monoceros) in the arctic waters east of Greenland. They also recorded sudden drops in the whale’s stomach temperature, which indicate that the whale has fed on cold arctic prey, for the first 7 days. They found that swimming could be divided into three types — near surface swimming down to 50m, shallow foraging dives to between 50 m and 350m, and deeper dives for prey at depths between 350m and 900m. Although the authors used data from a single individual, the dataset — which includes over 8500 dives — is the longest and most detailed record of whale diving activity studied to date. Such long-term records are hard to obtain because tracking devices often detach after just a few days or weeks.

Narwhals are thought to be impacted by reductions in sea-ice caused by warming waters, competition with fisheries, and disturbance by shipping vessels. This study is the first step towards understanding the diving behavior of these elusive creatures, which could ultimately help design conservation strategies to help protect them as the climate changes. Future studies should compare this baseline data with records from narwhals exposed to high levels of human activity, the authors suggest.

“Advanced statistical approaches provide a unique insight into a cryptic deep diving whale in pristine parts of the Arctic,” says study senior author Susanne Ditlevsen. “We found complex relationships between characteristics of diving patterns during different behavioral states, which has not been discovered before in the research of cetaceans.”