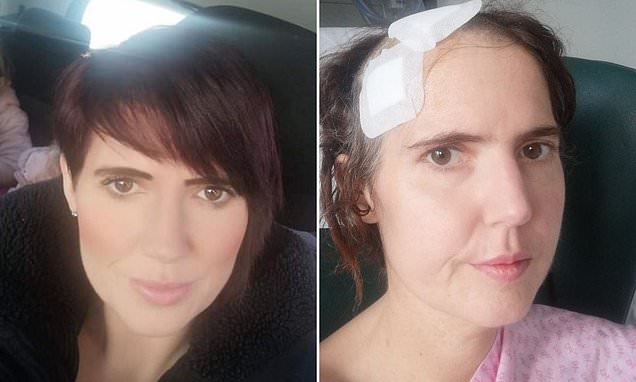 How a tooth abscess almost killed me: Mother spent five months in hospital after pus inside her mouth led to a life-threatening brain infection

A single mother spent five months in hospital after an abscess on her tooth led to a life-threatening infection on her brain.

Rebecca Dalton, 35, suddenly saw her ‘personality change completely’ in March and thought she was suffering a mental breakdown.

She had just finished a course of antibiotics for a small abscess on her upper wisdom tooth. It was first discovered last December, but treatment was delayed because Ms Dalton was pregnant.

Ms Dalton’s family took her to hospital during the Covid-19 crisis, where doctors confirmed the bacteria from her mouth had spread to her brain.

The resulting rare brain abscess put Ms Dalton’s life at risk because the swelling can cause potentially fatal brain damage.

Ms Dalton, previously a PA, deteriorated quickly and lost the ability to walk due to the pressure on her brain.

She finally left hospital last Tuesday, six stone lighter than when she was admitted, and still suffers from weakness on the left side of her body. 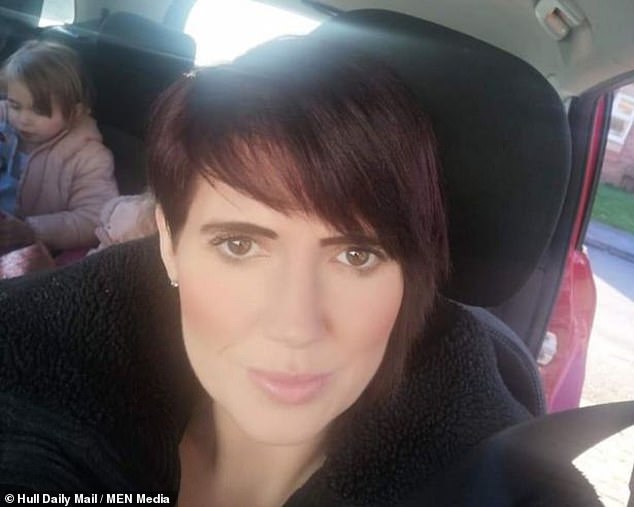 Rebecca Dalton, 35, a single mother from Snaith, near Goole, suddenly saw her ‘personality change completely’ in March and thought she was suffering a mental breakdown 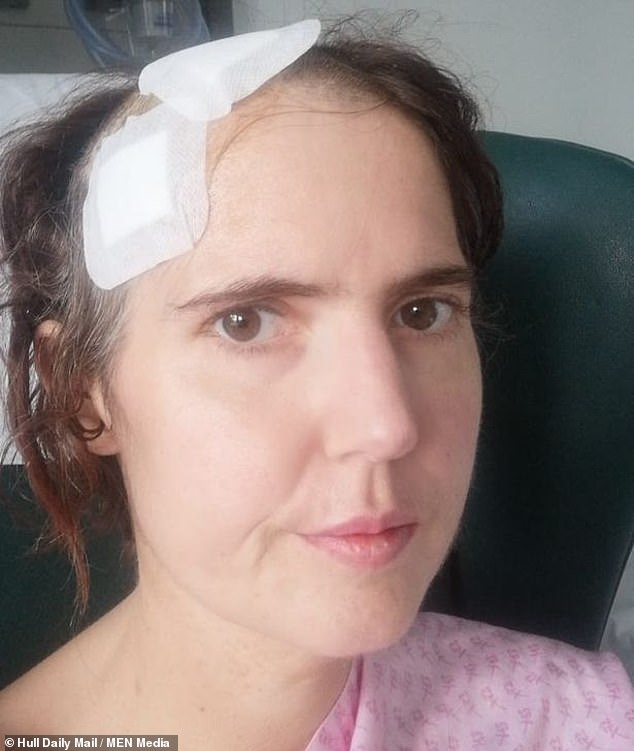 Doctors said the bacteria from Ms Dalton’s tooth abscess had spread to her brain, causing another abscess. She is pictured in hospital

A dental abscess — a build up of pus typically form a bacterial infection that has accumulated in the soft pulp of the tooth — can cause a myriad of dangers if left untreated.

‘They can sometimes spread to other parts of the body and make you ill,’ the NHS states, adding, ‘abscesses do not go away on their own’.

If the abscess doesn’t drain, the infection can spread to the jaw and other areas of the head and neck.

In serious cases it can lead to sepsis — a potentially fatal complication in which the body over-reacts to an infection.

When Ms Dalton, from Snaith, near Goole, went to the dentist in December last year, a small abscess was found on her upper wisdom tooth.

WHAT IS A BRAIN ABSCESS?

A brain abscess is a pus-filled swelling in the brain. It usually occurs when bacteria or fungi enter the brain tissue after an infection or severe head injury.

Although the risk of developing a brain abscess is extremely low in England, it is a life-threatening condition and should be diagnosed and treated as soon as possible.

The main causes of a brain abscess is an infection spreading from another part of the skull – such as a dental abscess.

Brain abscesses can be the result of an infection in another part of the body, for example, the infection that causes pneumonia spreading into the brain via the blood. It can also be caused by trauma, such as a severe head injury that cracks open the skull, allowing bacteria or fungi to enter the brain.

In some cases, the source of the infection remains unknown.

Swelling caused by the abscess can disrupt the blood and oxygen supply to the brain. There’s also a risk of the abscess bursting.

If left untreated, a brain abscess can cause permanent brain damage and could be fatal.

Even if treated, it can lead to complications including brain damage, epilepsy and meningitis.

The symptoms of a brain abscess may develop quickly or slowly but can include:

She was given antibiotics and told the tooth would need removing. But the dentist could not carry out the procedure there and then because she was heavily pregnant at the time.

In March, Ms Dalton took another course of antibiotics but it is not clear if the wisdom tooth was removed.

But after assuming the infection had been dealt with, Ms Dalton said her ‘personality changed completely’.

‘I became really uptight, really anxious and quite emotional,’ she said. ‘I thought I was having a mental breakdown.’

Her mum offered to care for her three young children, a five-year-old daughter and two twins aged three, while her friend took care of her three-month-old baby, because Ms Dalton worried about them witnessing what was happening to her.

‘I didn’t want them to witness me having a breakdown,’ she said.

Soon after, Ms Dalton was rushed to hospital in Scunthorpe by her terrified family.

Here, she was told she had a brain abscess that was putting pressure on the front of her brain and affecting her personality, cognitive abilities and bodily functions. The abscess would have been found with a brain scan.

A brain abscess, a pus-filled swelling in the brain, happens when bacteria from another infection in the head area or body enters tissue.

Brain abscesses are very rare therefore it is not clear how many people are affected. The ISPN Guide to Pediatric Neurosurgery estimates there are four cases per million people every year.

The risk of developing one is very low, NHS England says, because the body has a number of defences to protect the brain.

One of these is the blood-brain barrier, a thick membrane that filters out impurities from blood before allowing it into the brain. However, in some cases, germs can get through these defences and infect the vital organ.

A brain abscess is a life-threatening condition because swelling can starve the brain of oxygen, causing potentially fatal brain damage.

After losing even her ability to walk, Ms Dalton was sent to the neurological department at Hull Royal Infirmary.

Experts confirmed that the fluid in the brain contained the same bacteria as the dental abscess using a procedure known as CT-guided aspiration, when a needle is used to remove a sample of pus for testing.

Ms Dalton said her condition deteriorated so much that even now she cannot remember the transfer from Scunthorpe to Hull. 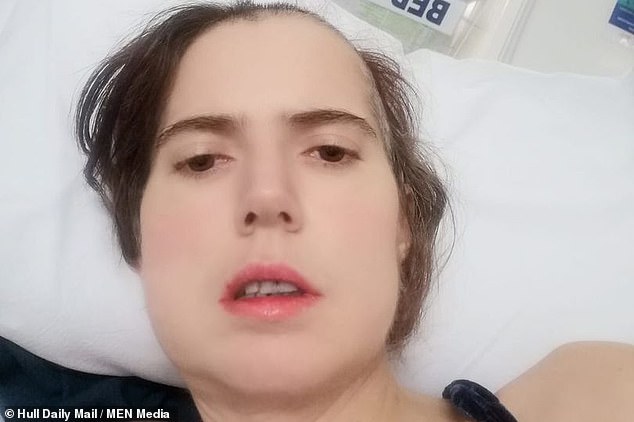 A brain abscess was putting pressure on the front of Ms Dalton’s brain and affecting her personality, cognitive abilities and bodily functions. After losing even her ability to walk, Ms Dalton was sent to the neurological department at Hull Royal Infirmary

She said: ‘It’s as if my memory’s just blacked it out. I was just so confused. I would look at people and think I knew them when I obviously didn’t.’

Ms Dalton was kept in hospital during the Covid-19 crisis, and so was only able to have a visit from her mother twice.

She said she had met some of the worst-affected patients of Covid-19 while in rehabilitation, including a woman who had spent 60 days in an induced coma fighting the disease.

‘They also mentioned having these really vivid nightmares where Covid was coming to get them,’ she said.

Ms Dalton herself required testing every time she moved beds during her time in hospital and said she had around 12 negative tests in that time.

She is now managing her recovery from home, but still has carers visit every day and struggles with weakness on the left side of her body, meaning she also requires adaptations to her home to make it safer for her.

Brain abscesses can cause life-long complications even if treated, including epilepsy.

Ms Dalton is appealing for others to make sure they follow up on routine dentist appointments after the small growth on her tooth almost cost her her life.

‘It has been a life-changing experience,’ she said.

‘At 35 you don’t expect to have carers in every morning watching you take your tablets, it’s been such a big shock.

‘It was really, really tough. It’s given me a different outlook on life – you can’t take for granted something so simple that could cost you your life.’

But she said coming home again for the first time in months was a huge step and she hopes to return to work as a PA in October.

Her children, who she now sees every day after having to make do with video calls while in hospital during lockdown, will also return once she is confident that her health has fully improved.

She said: ‘People need to know what can happen – a simple tooth abscess can take your life.

‘Just be aware, follow up on everything and get checked even after you’ve had antibiotics.

‘You don’t realise until you’re in that situation how dangerous it can be.’