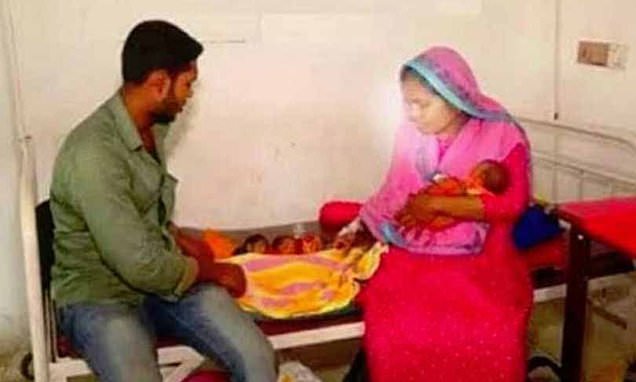 A mother with two wombs has delivered twins a month after giving birth to a premature son.

Arifa Sultana, 20, from Bangladesh, was getting used to motherhood after having her first child last month.

But 26 days later, she was shocked when her waters broke again, rushing to hospital in the Jessore district.

Doctors were stunned to find she had another two babies that were ready to be delivered at that moment.

It was revealed that the woman had a double uterus – a very rare condition a woman may have from birth without realising.

But experts have queried how two heartbeats had gone amiss in the extremely bizarre story. 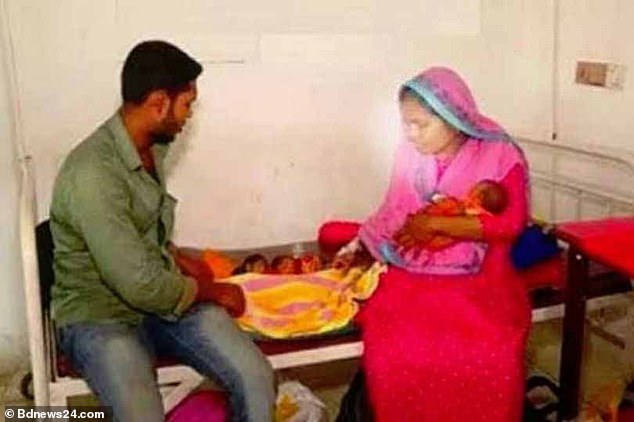 Arifa Sultana, 20, and her husband, Sumon Biswas, from Bangladesh were shocked when they discovered they would be having twins just 26 days after their first child was born. Pictured, with their children

Sheila Poddar, a gynaecologist who treated the woman, told AFP: ‘She didn’t realise she was still pregnant with the twins.

‘Her waters broke again 26 days after the first baby was born and she rushed to us.’

The babies, one boy and one girl, were healthy and had no complications despite never being monitored throughout pregnancy.

Mrs Sultana and her husband, Sumon Biswas, were able to take all three children to their home on Tuesday.

According to local media The Tribune, Dr Podder said it was the first time she had experienced this rare incident.

She said: ‘It’s a rare incident. I have seen such a case for the first time. I had not even heard about such incident before.

‘The first baby was born from one womb. The two babies born here are from the other womb.’

A double uterus, uterus didelphys, often causes no symptoms, according to Mayo Clinic, and is present from birth.

Women who have a double uterus can still successfully have children but it could increase the chances of miscarriage or premature birth.

The condition affects about one in 3,000 women. However, the odds of carrying a baby in each at the same time are around one in five million.

Dilip Roy, chief government doctor in Jessore, was shocked to hear of the woman’s story.

He said: ‘I haven’t seen any case like this in my 30-year plus medical career.’

Dr Roy questioned the actions of doctors at Khulna Medical College Hospital for not detecting the second pregnancy.

A double uterus may be diagnosed during a routine pelvic exam if a doctor suspects there are abnormalities.

Hailing from a poor family, Mrs Sultana said she was happy with the three children but was concerned about how she would bring them up.

‘I don’t know how we will manage such a huge responsibility with this little amount,’ Mrs Sultana said.

Mr Biswas, a labourer, earns less than £53 ($70) a month in Bangladeshi taka, but is determined to give his children the best.

He said: ‘It was a miracle from Allah that all of my children are healthy. I will try my best to keep them happy.’

In 2006 a British woman with a double uterus gave birth to healthy triplets in the first known case of its kind.

Hannah Kersey, of Northam, Devon, gave birth to a pair of identical twins from an egg that had implanted in one womb and then split, and also to a baby from a single egg in the other womb.

WHAT IS UTERUS DIDELPHYS?

Uterus didelphys, also known as a double uterus, is a condition where a woman is born with two uterus, to separate cervixes and sometimes two vaginas, though this is not always the case.

It occurs because in a female foetus, the uterus starts out as two small tubes.

As the foetus develops, the tubes normally join to create one larger, hollow organ — the uterus.

Sometimes the tubes don’t join completely and each one develops into a separate hollow organ so the woman is born with two wombs.

It often only becomes noticeable after puberty and is diagnosed with a physical exam or an ultrasound scan.

In terms of physical anatomy, the two wombs are often slightly smaller than average in order to fit, though they can be as big as a ‘normal’ womb.

It also makes it possible to be pregnant twice at the same time – with a baby in each womb.

Some women are also born with two vaginas, although they can have sex and menstruate in the same way as people with just one.

‘They may know they have two and be able to find them, or they may not realise,’ Dr Leila Hanna, a consultant gynaecologist & Obstetrician at BMI The Sloane Hospital, told MailOnline.

‘It can be painful because there are two squashed in the same area, so sometimes we do an operation to join them together, but its not necessary.

‘They could also have abnormalities of their kidneys and the tube which bring the urine from the bladder.’

Women will frequently have a slightly higher risk of late miscarriage, premature delivery and bleeding during pregnancy.

Often Caesarean sections are recommended, to reduce the risk of complications.

There is no treatment or cure for the condition.