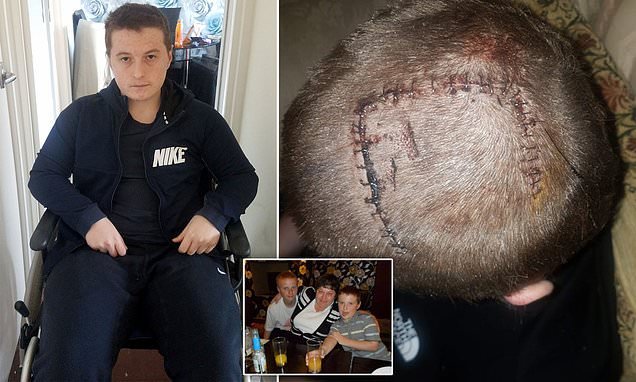 A teenage boy suffered a near-fatal stroke and required 11 hours of brain surgery after he ignored his headaches for a year.

Luke Hallam, of Grimsby, thought his near-constant headaches were just a normal part of his life.

But in March last year, the now 20-year-old suddenly lost all feeling in the right side of his body and later collapsed.

After being rushed to Scunthorpe General Hospital, Mr Hallam was told he had suffered a arteriovenous malformation stroke (AVM), which occurs when a tangle of blood vessels in the brain bypass normal tissue.

The then-teenager was forced to wait ten months for surgery to prevent the stroke occurring again, despite doctors warning he needed the procedure within six weeks.

This is due to Mr Hallam missing letters about the operation when he failed to tell his GP he had changed his address.

After finally going under the knife in January this year, the sales assistant is still virtually wheelchair-bound two months on and has developed depression as a result of the ordeal. 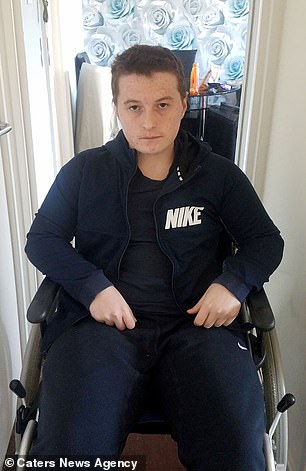 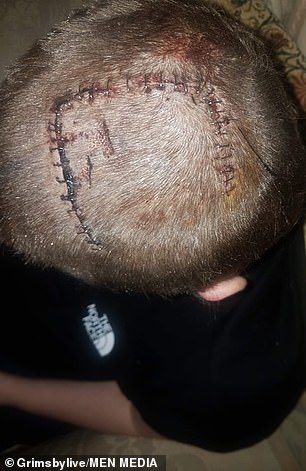 Luke Hallam spends most of his life in a wheelchair (seen left) after he suffered a stroke at just 19. The now 20-year-old still struggles to walk two months on from surgery. Doctors told Mr Hallam surgery (scar seen right) would reduce his risk of a second stroke by 95 per cent 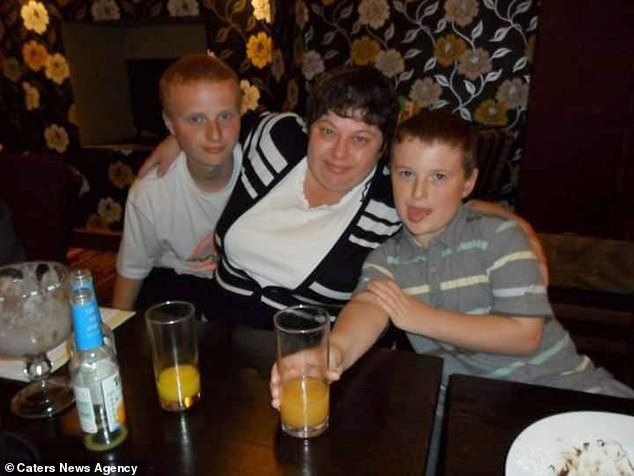 Mr Hallam collapsed in March 2017 after he lost all feeling in the right side of his body. He is pictured as a child with his brother Ryan (left) and mother Julie

Speaking of his symptoms, Mr Hallam said: ‘My body was just numb, I couldn’t move it.

‘It was scary, I thought it was pins and needles, I couldn’t even get off my chair.

‘When I got to hospital, doctors told me I had suffered a stroke and a bleed on the brain.’

Hearing the extent of his injuries, the naturally-pessimistic Mr Hallam became convinced he would not make it.

‘I can be quite a negative person, but when you’re 19 and they tell you that you have a bleed on the brain you think it’s the end.

‘It was scary because I never thought at my age I could have a stroke, I didn’t expect it at all.

‘What was even more frightening was I don’t have any history of it in the family or any pre-existing health condition.

WHAT ARE ARTERIOVENOUS MALFORMATIONS?

An arteriovenous malformation (AVM) is a specific term used to describe a tangle of blood vessels with abnormal connections between arteries and veins.

This means that blood from the arteries drains directly into the veins – without stopping to supply the normal tissues in that part of the body with essential substances like oxygen and nutrition.

Over time this can lead to the normal tissues becoming painful or fragile.

It also means that the AVM gets progressively larger over time as the amount of blood flowing through it increases, and it can cause problems due to its size.

Finally, it may also mean that the heart has to work harder to keep up with the extra blood flow.

Some doctors describe an AVM as ‘a ring road that bypasses the high street of a town’.

Traffic (or blood) will use the bypass rather than the high street which suffers as a result.

‘It just happened after having headaches throughout the year.’

Mr Hallam initially underwent a week’s worth of tests and MRI scans at Scunthorpe General Hospital before being transferred to Hull Royal Infirmary, where he was diagnosed with AVM.

Doctors told the then-teenager he could have radiotherapy, which would reduce his risk of a second stroke by 65 per cent.

Alternatively, he could undergo 11-hour brain surgery, which would lower the risk by 95 per cent.

After choosing to go under the knife, Mr Hallam then waited almost a year for the procedure.

He finally had the operation at Hull Royal Infirmary in January.

‘Having to wait ten months for my surgery has really affected my recovery, I could have been eight months into getting better it if I’d had the operation within six weeks,’ Mr Hallam said.

Speaking of life now, Mr Hallam – who is cared for by his girlfriend Tia Revell – said: ‘Now, when I walk short distances, I have to use a walking stick and remain in a wheelchair when going into town.

‘It has left a huge impact on my life, I can get a little depressed, and I don’t dare go out in case it happens again.’

Mr Hallam is speaking out to raise awareness of AVM, which makes up just ten per cent of stroke cases in the UK and rarely affects young people.

‘I get tired so easily, and I get stressed and angry really quickly – it had a real impact on my mental health,’ he said.

‘I’m sick and tired of just laying around but my therapy is going well, and I have a very supportive family and girlfriend that really keep me going.

‘I’m hoping I can get back into work soon.’

A spokeswoman for Hull University Teaching Hospitals NHS Trust added: ‘We would like to remind patients of the importance of informing us of any change in their personal circumstances, such as their address, to ensure they receive correspondence.’ 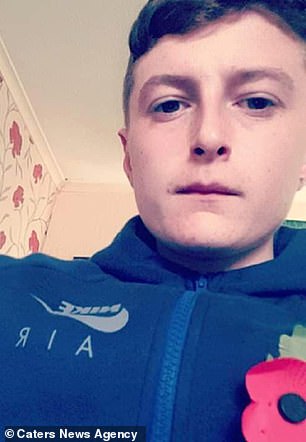 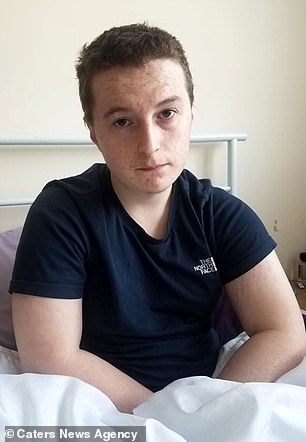 Mr Hallam (pictured left before the stroke) was convinced he was going to die when doctors gave him the diagnosis. Now in recovery, Mr Hallam (right) believes his progress was set back after his surgery was delayed when he failed to tell his GP he had changed his address