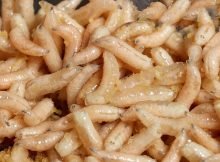 Maggots can be creepy, crawly and … medicinal? In a new effort to heal wounded people in war zones, the U.K. government is sending maggots to places like Syria, Yemen and South Sudan, according to The Telegraph.

Once these larvae — often those of green bottle blowflies — are connected with patients, they get right to work, keeping wounds contamination-free by gulping down dead human tissue and spreading their antibacterial saliva.

This macabre treatment may sound unusual, but it's actually a remedy that dates back to ancient times. For instance, the Australian Aboriginal peoples used maggots to clean wounds. And during World War I, soldiers in trenches also used the critters. [Coffee to Maggots: Top 10 Bad Things That Are Good For You]

Now, this therapy may help people with festering wounds stay free of infection. The $250,000 project may even help wounded people keep their limbs, as secondary infections from injuries and operations can lead to amputations.

"People living through conflict and humanitarian crisis are still dying from wounds that could so easily be healed with the right access to care," U.K. Secretary of State for International Development Penny Mordaunt, who is also a member of Parliament, told The Telegraph.

To roll out "project maggot," the U.K. will have field hospitals raise maggots on location. Once the fly eggs are laid, they will be sterilized and then incubated for a day or two. At that point, the maggots are ready for prime time, when they can be put directly into wounds or placed in BioBags, which are then wrapped around injuries, The Telegraph reported.

Sterile maggots are very valuable in places that have limited or basic medical treatment. These bug babies can digest dead and damaged tissue from the wound, according to a 2012 report in the Indian Journal of Plastic Surgery. Maggots can even cleanse wounds faster than surgeons can, Live Science previously reported.

However, to prevent the spread of disease, these maggots can't be used twice. So, researchers have directed that the larvae be disposed of in clinical containers after each use. If some escape into the wild, it shouldn't be a problem, as maggots undergo a sterilization process when they become flies, The Telegraph reported.

If the plan works, field hospitals will be breeding maggots within a year, providing enough hungry larvae to treat 250 wounds per day, Frank Stadler, a research fellow at Griffith University in Australia, whose group provided the science for the project, told The Telegraph.

Moreover, by 2021, the team hopes to have created a do-it-yourself maggot starter kit, so people in remote communities can raise the fly babies themselves.