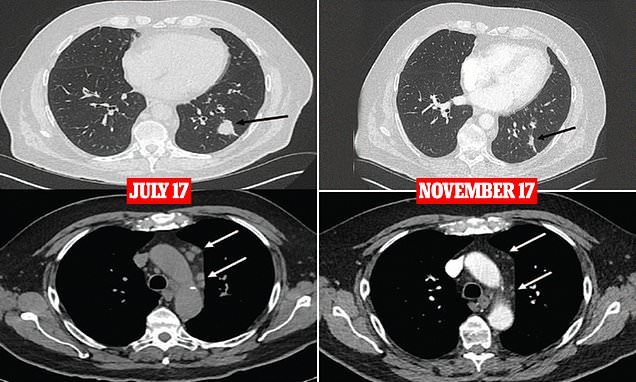 A cancer patient who accepted the disease would kill him saw his tumours shrink – by taking drops of cannabidiol (CBD) oil each day.

The 81-year-old, who hasn’t been identified, repeatedly refused chemotherapy and other treatments to prolong his life.

Instead, the ex-smoker, believed to be from the Stoke-on-Trent area, opted to take CBD oil for three months to tackle his lung cancer.

Doctors have now published stunning scans, showing how doing so halved the size of his tumours and reversed the progression of his disease.

The tale has been published in a medical journal, where doctors claimed ‘CBD may have had a role in the striking response’. 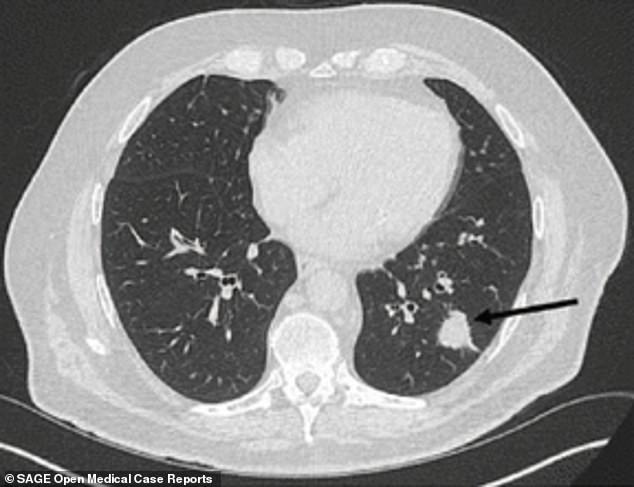 The 81-year-old, who hasn’t been identified, repeatedly refused chemotherapy and other treatments to prolong his life (pictured a CT scan of the man’s tumours in July 2017) 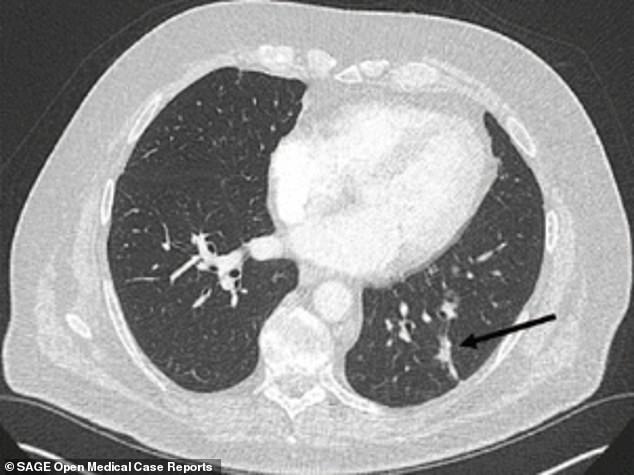 Instead, the ex-smoker, believed to be from the Stoke-on-Trent area, opted to take CBD oil for two months to tackle his lung cancer (pictured, a scan of his cancer in November 2017)

CBD – which doesn’t cause a ‘high’ – is an extract of the cannabis plant. It is legal in the UK and can be sold on the high street.

The anti-inflammatory compound is already backed for its plethora of benefits by the World Health Organization.

However, the latest case report offers hope it could tackle certain forms of cancer, as well as combating pain, epilepsy and anxiety.

Doctors at the Royal Stoke University Hospital treated the patient, who already survived a shave with prostate cancer 15 years ago.

They pointed to an array of promising research which has suggested CBD may have the power to slow the growth of some tumours.

However, claims that cannabis as a whole could have any helpful impact on cancer are widely doubted among the medical community.

Scientists believe CBD produces oxygenated chemicals in the body which may cause cancerous cells to kill themselves.

Though, several other pathways have also been suggested – including stopping the tumour from recruiting cells that help them grow.

Ian Hamilton, a drug researcher at the University of York, who did not treat the patient, told MailOnline the case report was ‘important’.

He said: ‘This single case study adds to several that offer some promise in the use of CBD products in the treatment of cancer. 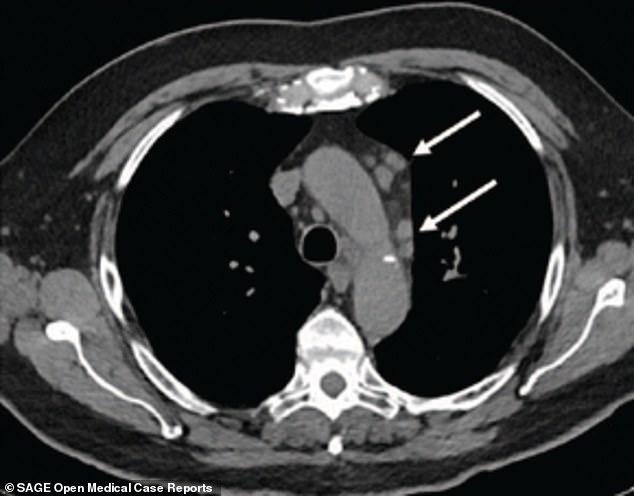 The tale has been published in a medical journal, where doctors claimed ‘CBD may have had a role in the striking response’ (pictured, a scan of his cancer in July 2017) 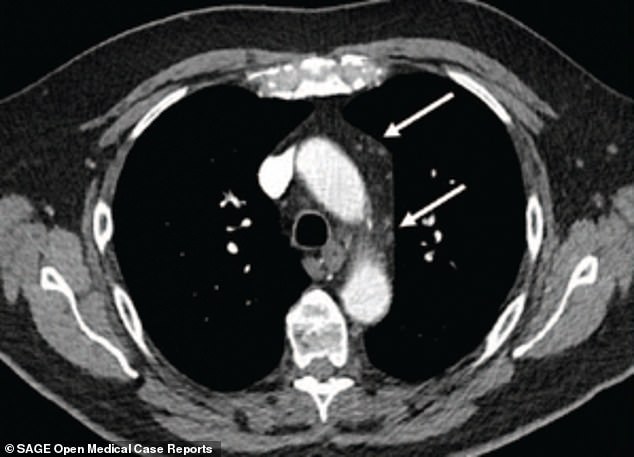 But, in a bizarre twist of events, a CT scan in November 2017 (pictured) revealed the ‘near total resolution’ of the mass to just 1.3 by 0.6cm

THE DIFFERENCES BETWEEN THC AND CBD

Tetrahydrocannabinol (THC) and cannabidiol (CBD) are both derived from the cannabis plant.

Together, they are part of the cannabinoid group of compounds found in hashish, hash oil, and most strains of marijuana.

THC is the psychoactive compound responsible for the euphoric, ‘high’ feeling often associated with marijuana.

THC interacts with CB1 receptors in the central nervous system and brain and creates the sensations of euphoria and anxiety.

CBD does not fit these receptors well, and actually decreases the effects of THC, and is not psychoactive.

CBD is thought to help reduce anxiety and inflammation.

‘I think there is real potential with CBD but there is also a lot of false hope being given. This kind of case study is important but is unlikely to change medical practice.

‘It will need a larger randomised control trial, which would help distinguish how much is down to the placebo effect.’

The patient had already been diagnosed with chronic obstructive pulmonary disease (COPD) – a debilitating lung condition that causes breathlessness.

As well as having COPD, he also used to smoke around 20 cigarettes a day when he was in his 20s and 30s. Both are risk factors for lung cancer.

The man was diagnosed with lung adenocarcinoma in October 2016, after going to his GP complaining that his breathlessness was getting worse.

Scans showed a shadow in his left lung, which turned out to be a 2.5 by 2.5cm cancerous tumour. The disease had also spread to his lymph nodes.

A lung adenocarcinoma is a form of non-small cell lung cancer, accounting for around 80 per cent of cases in the UK.

Only 15 per cent of patients with an adenocarcinoma of the lung survive for five years, according to statistics.

Doctors at Royal Stoke University Hospital then offered him chemotherapy and radiotherapy in hope of prolonging his life.

However, he declined treatment because of his age as he did not want to suffer adverse side effects in the final years of his life.

A CT scan conducted at the hospital in December 2016 revealed the lung mass had increased in size, measuring 2.7 × 2.8 cm.

Another chest X-ray in July 2017 showed his disease was slowly progressing.

But, in a bizarre twist of events, a CT scan in November revealed the ‘near total resolution’ of the mass to just 1.3 by 0.6cm.

Dr Sulé-Suso and colleagues also spotted a ‘significant reduction’ in the size and number of mediastinal lymph nodes.

Doctors then asked the patient about his lifestyle, in order to understand what may have prompted the dramatic effect on his cancer.

He revealed he had started taking CBD oil in September – just two months before the scan showed his tumour had halved in size.

At first, he consumed two drops twice daily for a week, before bolstering his dose to nine drops twice a day until the end of September.

The patient gave up taking the oil a week after his positive CT scan in November because he ‘didn’t like the taste and felt sick’.

No other changes in diet, medication or lifestyle were noted, leading the medics to believe CBD oil was the key driver in the shrinking tumour.

Dr Sulé-Suso and colleagues did not reveal the man’s condition now, or if he ever started taking CBD oil again.

The oil he was taking was made by MyCBD. It contained 200mg of CBD in every 10ml.

WHAT IS CBD OIL AND IS IT LEGAL IN THE UK?

Government advisers made it legal to buy CBD supplements in 2016

Government advisers at the MHRA made it legal to buy cannabidiol (CBD) oil in 2016 after they admitted that it has a ‘restoring, correcting or modifying’ effect on humans.

Suppliers in England and Wales have to obtain a licence to sell it as a medicine, following the decision in October two years ago.

Manufacturers are able to avoid the strict regulation by selling it as a food supplement – ignoring the lengthy process of gaining a medicinal licence.

CBD products comes in many forms, the most popular being an oil – which users spray under their tongue – or gel tablets which melt slowly in the mouth.

Cannabis oil, which is different to CBD oil because it contains THC – the compound that gives users a ‘high’ – is illegal under UK laws.

Billy Caldwell, from Castlederg, Northern Ireland, made headlines last April when he became the first Briton to be prescribed it on the NHS.

Cannabis oil, which reportedly has no side effects, influences the release and uptake of ‘feel good’ chemicals such as dopamine and serotonin.