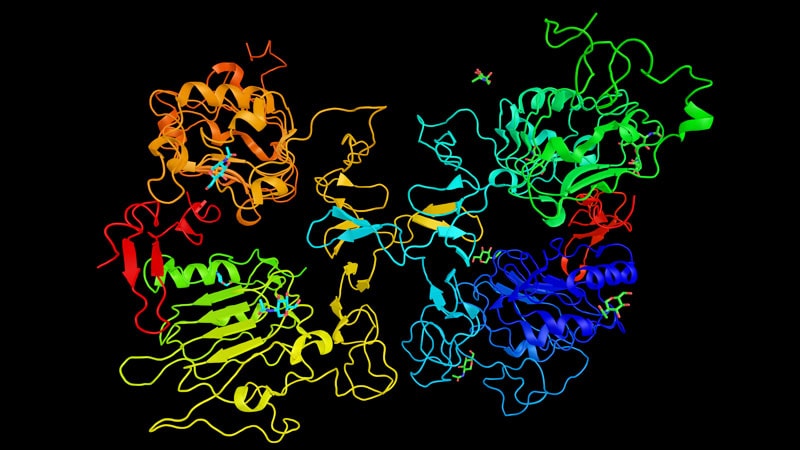 In non-small cell lung cancer (NSCLC), mutations to the epidermal growth factor receptor (EGFR) gene are generally associated with a poor response to immune checkpoint inhibitor (ICI) therapies. However, there is a range of different EGFR mutations, and different mutation combinations can lead to different tumor characteristics that might in turn affect response to therapy.

A new real-world analysis of 159 NSCLC patients found that a combination of a mutation of the TP53 tumor suppressor gene and the EGFR Ex20 mutation is associated with worse disease outcomes, compared to patients with the EGFR Ex20 mutation alone. But the news wasn’t all bad. The same group of patients also responded better to ICB (immune checkpoint blockade) therapy than did the broader population of EGFR Ex20 patients.

The EGFR Ex20 mutation occurs in about 4% of NSCLC cases, while TP53 is quite common: The new study found a frequency of 43.9%. “We first have to mention that the findings regarding TP53 do not reach statistical significance; however, the trend is very strong, and results might be hampered due to small sample sizes. We think it is [appropriate] to exhaust more treatment options for these patients, especially targeted approaches with newer drugs that specifically target exon 20 insertions, as these drugs were not applied in our cohort,” Anna Kron, Dr. rer. medic., said in an email exchange. Kron presented the results at a poster session in Paris at the ESMO Congress. She is a researcher at University Hospital of Cologne, Germany.

The ImmunoTarget study, published in 2019, examined over 500 NSCLC patients with a range of driver mutations including EGFR and found that they responded poorly to ICIs in comparison to KRAS mutations.

But Kron’s group was not convinced. “Ex20 mutations differ clinically from other tyrosine kinase mutations in EGFR. We set out this study to rechallenge the paradigm of impaired benefit from ICI in EGFR-mutated patients, as we consider these mutations not interchangeable with other EGFR mutations,” Kron said.

“We would postulate that in EGFR Exon 20 mutations, ICI and specific inhibitors should be part of the therapeutic course. In patients with co-occurring TP53 mutations, treatment escalation could be considered,” Kron said.

The researchers are continuing to study patients with EGFR Ex20 to better understand the role of TP53 and ICI therapy in these patients.

The study received no funding. Kron has no relevant financial disclosures.

This article originally appeared on MDedge.com, part of the Medscape Professional Network.