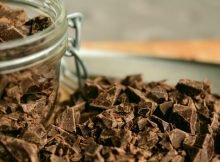 Chocolate lovers can get ready for some exciting news after a new study has revealed that chocolate might actually be better than cough syrup regarding that nagging winter cough.

WHDH 7 News has revealed that chocolate-based medication is better at suppressing a cough than regular codeine-based cough suppressant medications.

163 people were observed by researchers at the University of Hull in Yorkshire in the new study recently. Those that were prescribed chocolate-based medications for their cough reported a significant improvement of their condition within two days, compared to those that were using codeine-based medication for the same ailment. In addition, many of the people being studied were able to stop all treatments for their cough early due to the effectiveness of this new chocolate-based treatment.

The chocolate-based medication, known as ROCOCO, is believed to be effective as a result of an alkaloid in cocoa that can “relieve irritation and inflammation more effectively than codeine,” according to WHDH 7 News.

The new trial medicine has been licensed under the name Unicough and was shown to “reduce both cough frequency and sleep disruption within two days,” according to the Daily Mail.

“We have just seen the results of the largest real-world study of an over-the-counter cough remedy ever undertaken in Europe,” said Professor Alyn Morice from Hull University. Morice is the head of cardiovascular and respiratory studies at the University of Hull as well as a founding member of the International Society for the Study of Cough.

“This proves that a new medicine which contains cocoa is better than a standard linctus.”

As the Daily Mail also points out, this is not the first time that chocolate has proved effective when it comes to clearing a cough. Researchers at the Imperial College in London had previously found that the Alkaloid called theobromine that is found in cocoa is better than codeine at suppressing the cough reflex.

Researchers in the new study also believe that the demulcent properties of cocoa help ease coughing. This means that the chocolate-based medication coats the throat more effectively than codeine-based medications. As a result of this, nerve endings are protected, decreasing the urge to cough.

However, merely drinking a cup of hot cocoa will not likely have the same effect as the medication used in the study Alyn Morice warns. This is because the liquid is not thick enough to be effective.

“Slowly sucking on a piece of chocolate may provide some relief, but I think it is the way the chocolate compounds work with other ingredients in the linctus which make it so effective,” Morice explains.

Results of this startling new study are believed to be officially published in a scientific journal within the next 12 months.