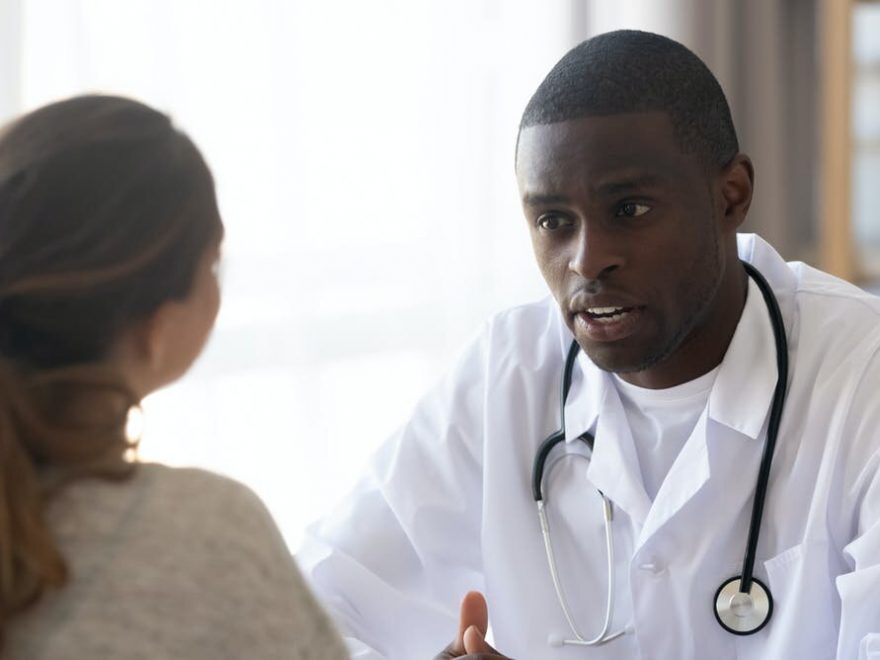 There are many factors that influence whether you choose to have surgery for a health condition.

But one you might not have considered is the very name your doctor uses to describe your condition can make you more or less likely to go under the knife, according to a growing body of research.

This is concerning because there are often less invasive options than surgery that are equally effective and safer.

What’s in a name?

Our world-first trial involved 1,308 people from five countries, some with and without shoulder pain, who were randomly allocated to read one of six hypothetical scenarios. The only difference between the scenarios was the medical term used by the health professional to describe the person’s shoulder pain.

In our study, we used the most common type of shoulder pain where people feel pain at the front of one of their shoulders which is made worse by lifting the arm and lying on it.

The terms doctors use vary so widely because it’s currently impossible to pinpoint the exact cause of most shoulder pain, even with the help of sophisticated technology such as magnetic resonance imaging (MRI).

The use of surgery for common types of shoulder pain is increasing worldwide, including in Australia.

Yet some shoulder surgery provides limited benefit to patients. One such example is a type of surgery called “subacromial decompression,” which involves reducing pressure on a tendon by removing surrounding tissue. This procedure is no better than placebo surgery (where patients were put to sleep and researchers only conducted a joint examination, rather than surgery).

Other surgeries to repair torn tendons provide little or no benefit compared with non-surgical treatments such as exercise.

Also, there’s no reliable way to determine that a rotator cuff tear is the cause of a patient’s symptoms. Up to 21% of people aged 30-39 years who don’t have any shoulder symptoms have rotator cuff tears when they are scanned.

More than 20,000 potentially unnecessary shoulder surgeries are performed in Australia each year, which we estimate to cost over A$200 million per year.

Use of surgery is also increasing across many other conditions. For example, knee reconstructions for anterior cruciate ligament (ACL) ruptures, and spinal fusions for some spinal conditions. However, evidence suggests surgery is not superior to non-surgical management for either of these surgeries.

What about other conditions?

Our study adds to increasing evidence showing the name your doctor uses to describe your condition can encourage you to consider unnecessary treatments.

There’s a type of abnormal breast cells that can build up in the milk ducts called “ductal carcinoma in situ.” For many people, these cells are low-risk and won’t grow, or grow so slowly they’ll never cause harm.

Using the terms “cancer” or “carcinoma” to describe this condition elicits strong negative reactions from patients, and increases their desire for more aggressive treatments, including surgery.

For patients with these low-risk cells, surgery, radiotherapy and/or hormonal treatments may not improve overall survival. Instead, these interventions may cause harm through surgical complications such as persistent pain or skin burns, as well as financial costs and the psychological impact of being diagnosed with “cancer.”

One study asked parents to consider a hypothetical scenario in which their otherwise healthy infant cries a lot and “spits up excessively.”

It found parents who were told their child had gastroesophageal reflux disease (commonly known as “acid reflux”) were more interested in medication compared to parents who didn’t receive a diagnosis at all. This was true even when parents were told medication wasn’t beneficial. Medication in babies shows no difference to placebo in reducing these symptoms.

Parents given the “pink-eye” label perceived the infection as more contagious than those given the “eye infection” label, even though both are simply other ways of saying conjunctivitis.

This is a common hormonal condition affecting many women. But symptoms are on a spectrum of severity, with no clear line separating normal from abnormal.

One study found young women told their symptoms indicated “polycystic ovary syndrome”—in a hypothetical scenario of a doctor’s visit—were more likely to want further medical testing than those given the term “hormonal imbalance.” These women also perceived their condition to be more severe and had lower self-esteem.

What should health professionals do?

It’s vital health professionals consider whether the terms they use to describe a condition might be causing unnecessary fear and anxiety, and leading patients to consider unnecessary tests and treatments.

Health professionals may find it challenging to avoid terms they’ve been using for many years. But the potential cost of increasing patient’s fear and anxiety, and making people feel they need surgery when they don’t, cannot be ignored.

Changing how health professionals describe conditions to their patients is a simple strategy that could curb the rise of unnecessary health care.

For patients with shoulder pain not caused by severe trauma, we suggest health professionals avoid telling patients they have rotator cuff tears as this may make some patients think shoulder surgery is needed (which it isn’t).