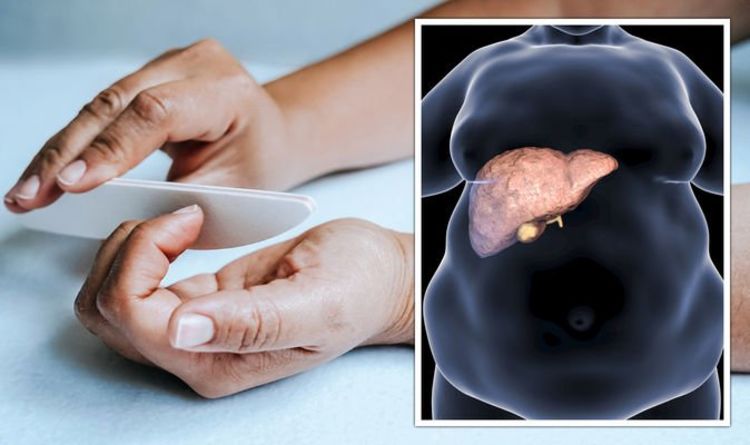 The liver’s primary role is to filter out foreign substances before they are able to inflict damage on the body. When fat encases the vital organ, however, its ability to carry out this function becomes thwarted. Signs of NALFD are rare during the initial stages, but symptoms commonly occur further down the line. One telltale sign in the nails may denote advanced liver trouble.

Fatty liver disease can be broken down into different stages.

The final stage, known as cirrhosis, occurs when the body produces scar tissue in the liver, causing irreversible damage.

It is during this phase that symptoms become more overt, triggering changes in different parts of the body including the nails.

During cirrhosis, nails may whiten and develop white stripes.

READ MORE: Fatty liver disease: Full list of symptoms which can be found on your face warning of risk

The paleness is thought to stem from the liver’s inability to manufacture the blood proteins, which explains why the nail paleness may also result from anaemia.

Some sources, including the NHS, claim that the fingertips and nails may also become unusually curved, but this process is more commonly seen in individuals with alcohol-related liver disease.

According to the website Liver Support, Muehrcke’s lines, which are characterised by two double white links that run horizontally across the nail, are another telltale sign.

“Muehrcke’s lines have been linked to low levels of the protein albumin, an important component of blood that is made in the liver,” explains the website.

As the production of albumin comes to a halt, fatty liver patients may also notice a dark band by the tip of each nail, which is referred to as Terry’s nails.

While changes in the appearance, colour and shape of nails can be indicative of liver damage, other symptoms can be manifest in the hands and feet.

According to Medical News Today, palmar erythema, which refers to reddening in both of the palms, could also be linked to fatty liver disease.

“Reddening typically occurs on the lower part of the palm, but sometimes it may extend all the way up through the fingers,” explains the health body.

This redness may resemble a rash, and the skin will turn pale when pressed and may be accompanied by a widening of the tips of the fingers.

How to avoid fatty liver disease There are a number of different reasons why some people develop fat in the liver while others don’t, but the condition correlates strongly with body mass index.

“Similarly, there is limited understanding of why some fatty livers develop inflammation that leads to cirrhosis,” says the Mayo Clinic.

According to the Cleveland Clinic, staying at a healthy weight, limiting alcohol consumption and taking medications as prescribed are all essential for preventing the disease.

While certain risk factors for fatty liver disease are obvious, others, such as insulin resistance and high blood sugar.

“Because NAFLD causes no symptoms in most cases, it frequently comes to medical attention when tests done for other reasons point to a liver problem.”