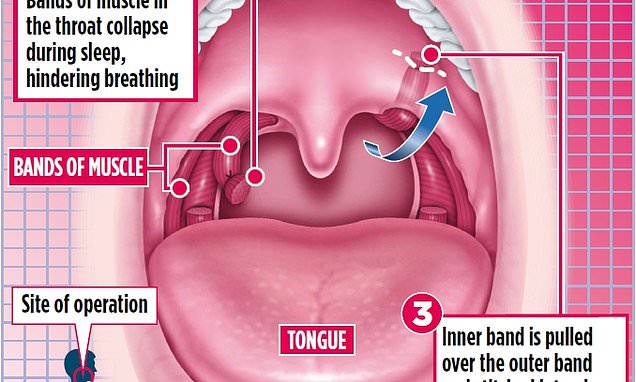 End those snory, sleepless nights… with a throat lift! People who suffer from a severe sleep disorder to benefit from pioneering new throat procedure

People who suffer from a severe sleep disorder that stops them from breathing at night are set to benefit from a radical new procedure that ‘remodels’ the inside of the throat.

The 90-minute operation is being offered to patients with obstructive sleep apnoea, a condition in which soft tissues at the back of the mouth collapse during sleep, at times blocking the opening to airways.

Those affected typically have an extreme, sometimes explosively loud snore – and are at increased risk of serious health problems, including heart attack and stroke. 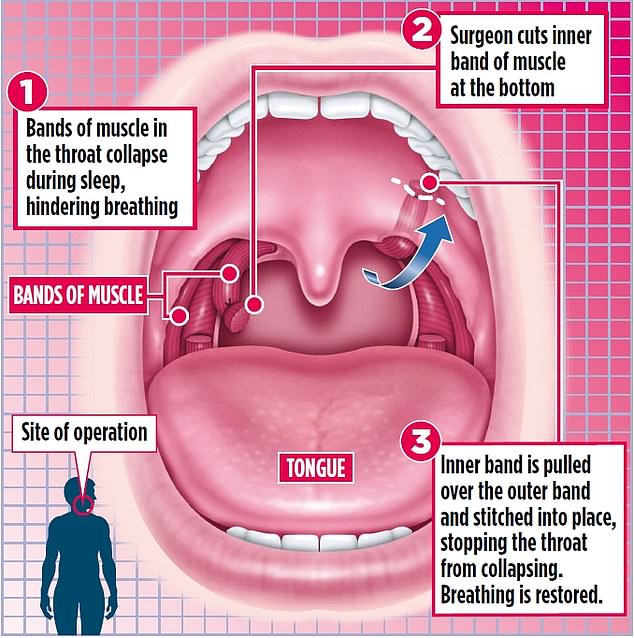 In the new procedure, surgeons delicately cut, reposition and stitch the muscles that surround the pharynx, or back of the throat.

This creates an internal support that limits how much the tissues can collapse and so aids normal breathing during the night.

The operation is not to be taken lightly: after an overnight stay in hospital, patients typically experience throat pain and will need up to a month off work.

In the recovery period, there is a risk of bleeding which may require further treatment, infections, difficulty in swallowing and even speaking, and a feeling of a persistent dry throat.

But small studies have found it is remarkably effective for obstructive sleep apnoea sufferers who do not tolerate conventional, non-surgical treatment.

The severity of obstructive sleep apnoea is measured by doctors during a sleep study, in which patients are monitored through the night.

The partial or complete collapse of the airways during sleep leads to a brief awakening and a drop in blood oxygen levels – and the number of times this happens every hour is scored on a scale known as the apnoea-hypopnoea index, or AHI.

In severe cases, there can be 30 or more so-called ‘breathing events’ per hour. Of those patients who have had the new operation, known as expansion pharyngoplasty, eight in ten experienced around a 50 per cent or more improvement in their AHI scores. Some saw their score slashed by three-quarters.

Obstructive sleep apnoea is thought to affect one in 15 adults, although up to 80 per cent of cases go undiagnosed, with sufferers waking exhausted without understanding why.

They are at raised risk of high blood pressure, depression, heart disease and stroke.

First-line treatments typically include lifestyle changes, such as avoiding alcohol, stopping smoking and losing excess weight. When these fail to have a positive impact, patients may be prescribed a mask to wear over the mouth and nose that gently blows air into the throat to keep the airways open.

But according to Vik Veer, consultant surgeon at the Royal National Throat Nose and Ear Hospital in London, research shows many stop using them because of discomfort while sleeping.

Another option is a gum shield-like device which pulls the lower jaw forwards to create room behind the tongue and allows air to flow through the previously closed gap.

Mr Veer, who works in the only NHS centre funded to carry out surgery on obstructive sleep apnoea sufferers, is one of the first British surgeons to offer expansion pharyngoplasty.

At either side of the pharynx are two bands of muscle – the palatoglossu, and behind that, the palatopharyngeus. These connect the palate, or roof of the mouth, to the side of the throat.

‘When you open your mouth, they appear like upside-down hammocks on either side of the throat,’ says Mr Veer.

It is the palatopharyngeus muscle which has a tendency to collapse into the airway in obstructive sleep apnoea patients.

During the operation, carried out under general anaesthetic, each palatopharyngeus is cut at the bottom and then pulled up and forwards, and stitched to the edge of the pharynx.

‘It’s a bit like drawing open and the securing some curtains,’ explains Mr Veer, who has carried out this operation around 100 times over the past two years and adds: ‘Effectively, we remodel the throat.’

Improvement in symptoms is typically seen in three to six months.

Gary Fox, 45, from Romford in Essex, had the surgery in August after decades of chronic snoring and unsettled sleep.

Mr Fox, a care assistant, had only received an accurate obstructive sleep apnoea diagnosis nine months earlier, after staying overnight in hospital for a shoulder operation, when nurses noticed his suffocated breathing and intense snoring while sleeping.

He says: ‘Tests showed I stopped breathing over 80 times an hour when I slept. Suddenly my constant tiredness, my low mood, it all made sense.

‘I tried a mask for a few weeks, but couldn’t sleep with it on, and then was referred to Mr Veer.

‘After the operation I was in incredible pain for about a week, and then I suffered an infection so was readmitted to hospital for four days, but a month later I felt like I could breathe again properly for the first time in my life.

‘I’m exercising for the first time ever now, I’ve lost over a stone, and feel half my age.’

I’VE suffered with mild asthma all my life and it was exacerbated by last summer’s high pollen. Those sunny skies are long gone, but my irritating, dry cough has stuck. Living in heavily polluted London hasn’t helped.

Three nights of inhaling the purest air imaginable at the five-star Rosa Alpina hotel and spa at San Cassiano in the Dolomite mountains, two hours’ drive from Venice. In July last year, a daily limit on vehicles entering the mountain range – a Unesco World Heritage site – was imposed to protect the air quality.

In-house health expert and former GP Dr Suraj Dubey practises Ayurvedic medicine. He measured my temperature, heart rate and body weight and asked about my family medical history and my job. This assessment, he told me, determined that my dosha (body and mind type) was ‘air’, tinged with ‘fire’.

The diagnosis determined the fragrance of essential oil that was slathered upon my body during a subsequent hour-long massage.

The next morning at 8am, I enjoyed my first-ever yoga class – as instructed by Dr Dubey – in a room with a breathtaking view.

Deep breaths right into the belly, Mr Dubey said, was the key thing to learn.

After four sessions, my breathing steadied and my clicking neck and shoulders were miraculously soothed.The next day I challenged myself to a nine-mile hike in the crisp, pure air.

On my final evening came a lymphatic drainage massage. In Ayurvedic folklore, ‘lymph’ is a plasma in the body that fights infection. The massage aims to help it flow more easily, bolstering the immune system. I didn’t see any immediate health benefits, but the deep-tissue rub left my body lighter than air and my mind serene.

Back in smoggy Britain, my asthma remains under control. Every night, yoga and rhythmic, deep breathing sends me soundly off to sleep. Dr Dubey may not have cured me, but he has taught me to relax, unwind and, most importantly, to breathe.

Last week, I wrote about a simple exercise that helps to ease lower-back pain. But if upper-back pain – often seen in those who slouch over a desk – is your problem, then you should try this. It’s an easy at-home exercise that will work the smallest muscles in the upper back, and this is key to easing tension in the bigger muscles and the bones.

1. Hold a very light weight – a tin of beans is fine – in both arms and lie on the floor facing downwards.

2. Keep your arms out to the side of you, slightly bent.

3. Lift the weight off the floor until your hands are in line with the shoulders and you feel the muscles between your shoulder blades squeeze. If the weight is too heavy, do it unweighted.