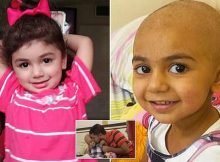 Fourth donor found for two-year-old cancer sufferer with some of ‘the rarest blood in the world’: Global search continues as up to six more matches are needed to save her life

Four donors have been found in the quest to save the life of a two-year-old cancer sufferer with one of the rarest blood types in the world.

Zainab Mughal’s family, who come from Pakistan, have been told she needs transfusions from up to 10 donors if she is to have any only hope of beating her neuroblastoma.

But Zainab – who lives in South Florida – is missing a protein called Indian B, which most people carry on their red blood cells. Her body will therefore reject any blood with this protein.

Due to her Pakistani heritage, the youngster is most likely to match with people of Pakistani, Indian or Iranian decent, of which less than four per cent are lacking Indian B. She also requires blood type A or O.

Against all the odds, a global search lead to a fourth donor being found in the UK on Wednesday, after two donors in the US and one in Birmingham, UK, were identified last month. 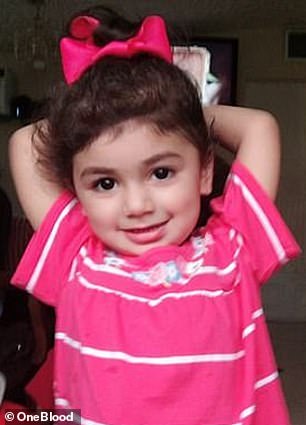 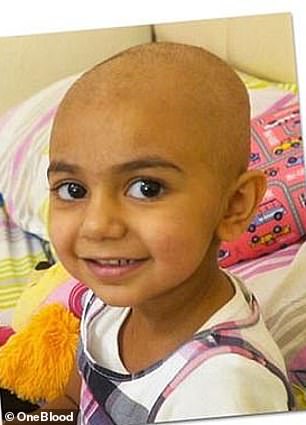 Zainab Mughal, who has some of the rarest blood in the world, urgently needs transfusions from seven-to-10 donors to help her beat cancer. The youngster is pictured left before she was diagnosed with neuroblastoma two months ago and right while undergoing chemo 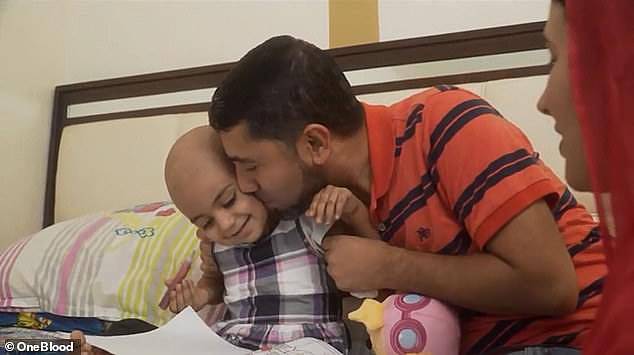 Zainab is missing a protein most people carry on their red blood cells and will therefore reject any blood containing it. She also requires donations from people of Pakistani, Indian or Iranian decent with blood type A or O. Her father Raheel Mughal (pictured) is appealing for help

‘Lucky, thank God, they have found donors,’ Zainab’s father Raheel Mughal said. ‘So, so far, she has been going through her normal treatment. We will definitely need more blood.

‘If you are one of those people from the Middle East, please go out and donate blood for my daughter. My daughter’s life very much depends on the blood.

‘It’s a humble request and I request it from my heart.’ Neither Zainab’s parents or her relatives that have been tested are a match.

No details have been released of the fourth donor other than them being from the UK.

Zainab was diagnosed with neuroblastoma – cancer of specialised nerve cells – two months ago after a tumour was found in her stomach. Doctors believe the growth may have been there for ten months.

Speaking of her diagnosis, Mr Mughal said: ‘We were all crying. This was the worst thing we were expecting.’

According to St Jude Children’s Research Hospital, neuroblastoma makes up seven to 10 per cent of childhood cancers, with around 800 new cases being diagnosed in the US every year.

Around 95 cases are diagnosed annually in the UK, Children with Cancer UK statistics reveal.

Neuroblastoma is a cancer of specialized nerve cells in the nervous system and other tissues.

It is the second most common solid tumor in childhood, and it makes up seven to 10 percent of the total number of children’s cancers.

Neuroblastoma commonly occurs in either one of the two adrenal glands in a child’s tummy or in nerve tissue that runs alongside the spinal cord, in the neck, chest, abdomen or pelvis.

The cancer can spread to tissues beyond the original site, including bone marrow, bone, lymph nodes, liver and skin.

As with most cancers the cause of neuroblastoma is unknown. The symptoms vary depending on where a child’s tumor is.

Treatment depends on the age of the child, as well as the size and position of the tumor and whether the disease has spread.

The disease is most common in children under five and rarely occurs in anyone older. It is usually found in the adrenal glands, which sit above the kidneys and produce hormones that help regulate metabolism and the immune system.

However, the disease can also begin in, or spread to, other areas, including the abdomen, chest, and spine, where groups of nerve cells exist.

Zainab is undergoing chemo, with transfusions being required to restore her blood cells that are destroyed by the treatment.

‘She’s going to need to be completely supported by blood donations in order to survive the treatment in order to kill this cancer,’ Frieda Bright, a lab manager at the non-profit organisation OneBlood, told CNN.

‘The blood’s not going to cure her, but the blood’s very, very important to support her while she undergoes the treatment for this particular cancer.’

OneBlood – which is aiding the global search to find Zainab donors –  will continue looking until three-to-six more matches are found, it said in a statement.

But appropriate donors are ‘extremely rare,’ according to Sandra Nance, senior director of the American Rare Donor Program.

The programme tracks at least 59 types of rare blood and has more than 120,000 registered donors – with not a single one being a match for Zainab, she said.

Zainab’s likely need to be exclusively of Pakistani, Indian or Iranian descent – meaning both parents must be 100 per cent of one of these ethnicities.

‘We have a zero per cent chance of finding compatible blood for this little girl if we look in pretty much any other ethnic group,’ Ms Bright added.

‘Rare blood is the blood you don’t have when you need it no matter what,’ Ms Nance said. ‘If a person has been identified as a rare donor and they’re called on to give, my hope is they will donate, if they are able.’ 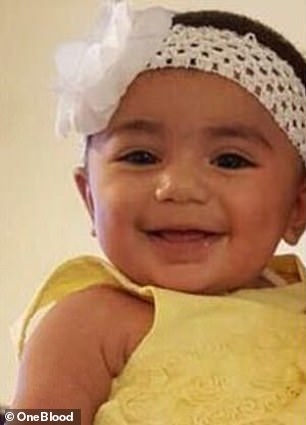 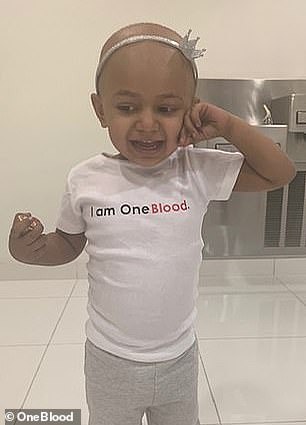 Pictured left before she was diagnosed, doctors found a tumour in Zainab’s stomach, which they believe was growing for ten months. The youngster (pictured right after losing her hair to chemo) is working with the non-profit organization OneBlood to find donors 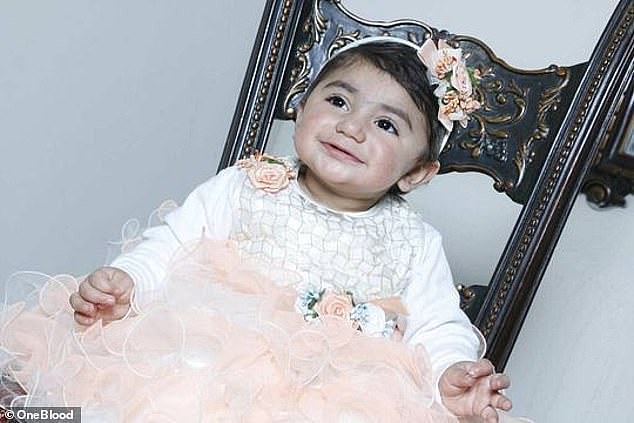 This comes after a 50-year-old British Indian woman was the third person found to be a match last month.

The mother-of-two, from Nottingham, who has chosen to remain anonymous, said she feels ‘privileged’ that her donation is being used to help Zainab.

‘I didn’t know who the recipient was when I donated but I do know now, having read the coverage,’ she told the Press Association.

‘I am very humbled that I have played a small part in aiding someone’s recovery from illness.

‘I do hope the publicity encourages more people to donate, especially from the Asian community, as even a single donation can make a massive difference to someone who needs it.’

OneBlood is coordinating compatibility testing and asks that prospective donors specify they are looking to donate for Zainab so their blood can be tagged for testing.

In the past month, the organisation has received more than 22,000 emails from people who potentially meet the criteria needed to match with Zainab, it said on its website. 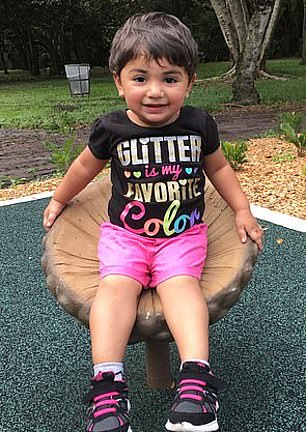 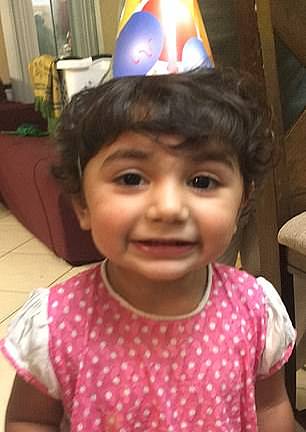 A fourth donor was found on Wednesday, after two from the US and one from Birmingham, UK, were identified last month. Zainab is pictured before left and right during happier times 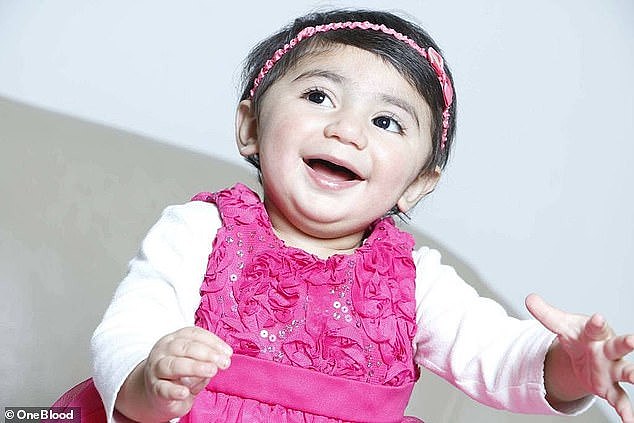 Zainab’s father said her life depends on blood donations from strangers. She is pictured before