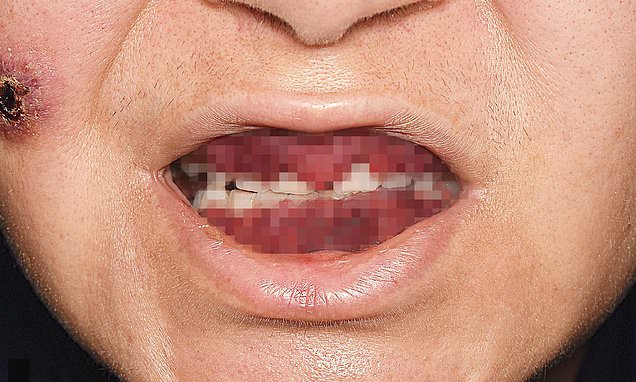 Doctors were shocked when a woman showed up at a clinic with her teeth surrounded by swollen and overgrown gums that looked like strawberries.

In a case report from the New England Journal of Medicine, the 42-year-old woman from Iran visited a dermatologist complaining of worsening oral pain.

She said her gums had been growing for six weeks prior to her visit and she’d been suffering from recurrent nosebleeds and ulcers that were ‘eating away’ at her face.

That’s when doctors noticed a granular appearance in her gums and diagnosed her with a condition that’s nicknamed ‘strawberry gingivitis’. 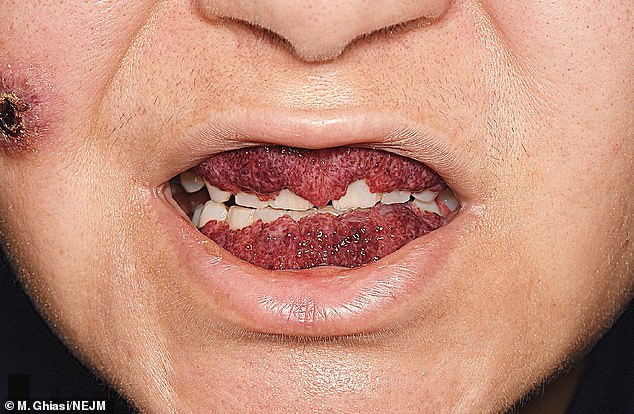 An unnamed 42-year-old woman from Iran visited a dermatologist complaining of overgrown gums. She was diagnosed with a rare condition called ‘strawberry gingivitis’

When gum tissue overgrows around the teeth, it’s normally known as gingival hyperplasia.

It’s typically caused either by poor oral hygiene or as a side effect of certain medications, such as anti-seizure drugs or immunosuppressants.

In most cases, improved oral hygiene resolves gingival hyperplasia. But if the underlying cause is due to a drug, surgery may be necessary.

However, the unnamed women’s condition had progressed so much that it had developed into a rare form known as strawberry gingivitis.

Doctors soon discovered that the underlying cause was granulomatosis with polyangiitis (GPA), which is a rare disease in which the immune system attacks blood vessels.

Blood flow to some of the organs – such as the nose, sinuses and kidneys – slows, which causes areas of inflammation called granulomas to develop.

Scientists are unsure of what causes it, but believe it may be triggered by an infection or a virus, according to the National Organization for Rare Disorders.

If left treated, GPA can cause serious and permanent damage, such as changing the shape of the nose or kidney failure.

Dr Maryam Ghiasi, one of the physician that treated the woman at Tehran University of Medical Sciences in Iran, said scans showed no signs of the disease in her sinuses.

However, the team did find antibodies that are hallmarks of GPA in her body as well as several nodules in her lungs.

‘Strawberry gingivitis is a rare manifestation of granulomatosis with polyangiitis, and its clinical presentation is highly suggestive of the disease,’ she wrote in the case report.

Dr Ghiasi said the patient received cyclophosphamide, which suppresses the immune system, and prednisolone, a steroid that treats inflammation.

But the woman never returned for a follow-up appointment, so the team does not know if her condition improved or if she received further treatment.

The original report was published in November 2017, but the photo has started going viral again.

‘This was a fascinating case and this photograph is the most severe one that I have seen,’ Dr Joseph Nemeth, a periodontist from Michigan who wasn’t involved in the case, said in a video.

‘A blood vessel disease can be treated if caught early, but if not, it can be fatal. Make sure your mouth is checked, not just for cavities, not just for gum disease, but a general look-over, because there’s lots of things that we can catch first in the mouth that may otherwise be missed.