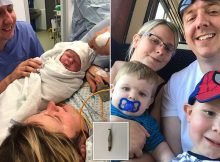 A mother has given birth to a ‘miracle baby’ after doctors warned her abdomen was too scarred for her to carry a child.

Lucy Elliott, 26, developed excruciating back pain following the birth of her eldest son Adam in September 2014.

Barely able to walk, Ms Elliott was referred for an MRI scan, which revealed a metal hook had been left in her abdomen following emergency surgery to remove her appendix in April 2013 at Chesterfield Royal Hospital.

Although the five-hour operation to remove the hook was a success, doctors warned Ms Elliot it was found close to her uterus and may have caused too much damage for her to have a successful pregnancy again.

Desperate to give Adam a sibling, Ms Elliott defied the odds when her and her partner Craig Halliday, 33, welcomed Charlie in September 2017. 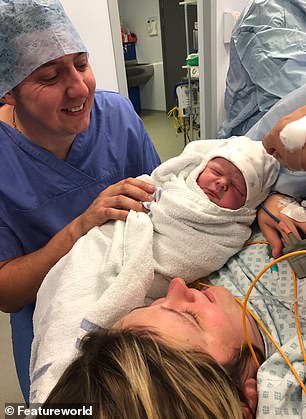 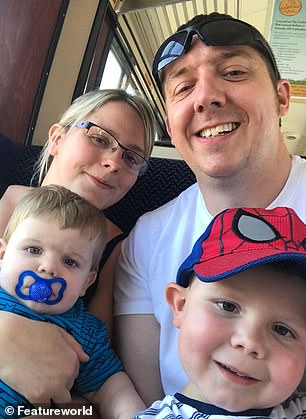 Lucy Elliott gave birth to her ‘miracle baby’ Charlie (pictured left with her partner Craig Halliday in September 2017) after doctors warned her abdomen was too scarred for her to carry a child. Also parents to four-year-old Adam, the family are pictured right recently 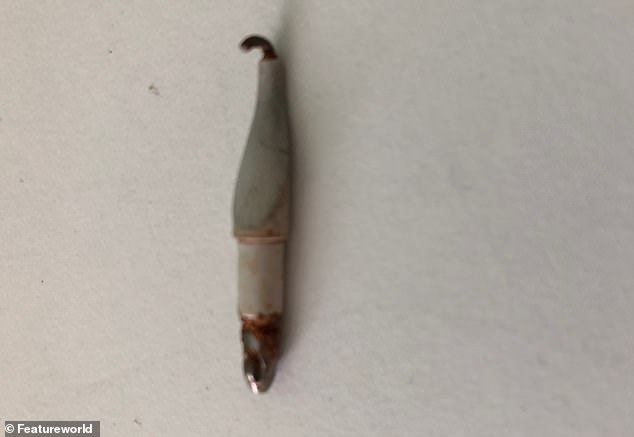 Doctors left a metal hook (pictured) in Ms Elliott’s abdomen following emergency surgery to treat an appendicitis in April 2013. She first became aware of the problem after developing excruciating back pain following Adam’s arrival. Scans later revealed the hook near her uterus

Ms Elliott’s ordeal began in April 2013 when she woke one morning in excruciating pain.

Her GP referred her to Chesterfield Royal, were doctors warned her appendix needed to be removed immediately.

Ms Elliott, who works as an administrator, said: ‘The operation seemed straightforward. But a few weeks later I started getting a terrible backache. I couldn’t understand why but thought I must have pulled a muscle.’

Despite her discomfort, Ms Elliott shortly became pregnant and gave birth to Adam the following year.

‘Following his birth my backache really increased,’ she said. ‘Some days it was so severe I even found playing with Adam difficult.

‘It was heartbreaking not to be able to run around with him as other mums do.’

After being referred by her GP for some tests, scans revealed the metal hook that was causing Ms Elliott’s pain.

‘When I had my appendix out, it was keyhole surgery,’ she said. ‘The hook at the end of the surgical instrument had fallen off inside me and no one had noticed.’

Although a relief to know what was causing her discomfort, Ms Elliott then faced the difficult decision of whether to have it removed and risk making her suffering worse.

‘Doctors said they didn’t know how far it had embedded inside me,’ she said. ‘They said it might be best to leave it where it was as removing it could cause more damage.’

Desperate to get her life back to normal, Ms Elliott decided to go under the knife again and instantly felt better for it.

‘Finally I could run,’ she said. ‘It was fantastic to feel so much better.’ 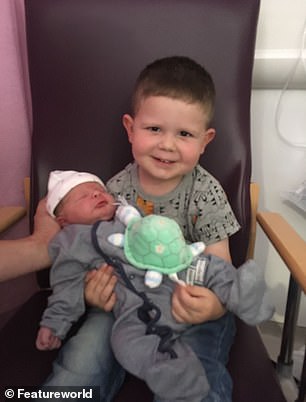 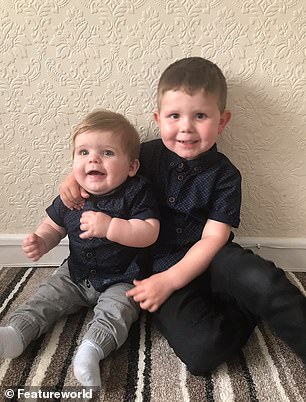 Doctors warned Ms Eliott the damage may make it ‘too much’ for her to carry another child. Desperate to give Adam (pictured left when Charlie was a newborn) a sibling, the couple tried for another baby. Against all the odds, the brothers are pictured recently right

But the good news did not last long, with doctors warning Ms Elliott the scarring inside her abdomen could prevent her from carrying another baby.

‘The hook had been very close to my bowel and uterus,’ she said. ‘Doctors said if I got pregnant the weight of a baby might be too much for my body to cope with. It was such a blow as I so wanted a sibling for Adam.’

Refusing to give up hope of having a second child, Ms Elliott was thrilled to discover she was expecting again but worried about how her health scare may affect her pregnancy.

‘We were both thrilled to find out I was pregnant with Charlie but the pregnancy was fraught with worry,’ she said. ‘Carrying him was extremely difficult.

‘I had a terrible pregnancy and I was extremely worried I would lose Charlie.’

Although ‘more than happy with her family’, Ms Elliott is outraged staff at Chesterfield Royal Hospital could make such a mistake.

After making an complaint, the hospital has apologised and paid the couple compensation. It declined to comment when approached for this story.

‘Theatre staff are supposed to count all the instruments used in an operation and double check nothing has been left inside a patient,’ Ms Elliott said. ‘Clearly that hadn’t been done.

‘But we are more than happy with our family. We simply feel so incredibly lucky to have our little miracle Charlie.’

DOES SURGICAL EQUIPMENT EVER GET LEFT IN PATIENTS’ BODIES? AND WHAT ARE THE RISKS?

Surgical items left in the bodies of patients can cause sepsis and even death.

In the US, up to 6,000 surgical instruments are left inside patients’ bodies every year. Of which, around 70 per cent are sponges and the remainder items such as clamps.

Dr Atul Gawande, a surgeon at Brigham and Women’s Hospital, said: ‘In two-thirds of these cases, there [are] serious consequences.

‘In one case, a small sponge was left inside the brain of a patient that we studied, and the patient ended up having an infection and ultimately died.’

Such mistakes are considered so shockingly bad they are often referred to as ‘never events’, which also covers operating on the wrong patient or part of the body.

In 2004, the Joint Commission, a US-based nonprofit organisation, published the Universal Protocol, which provides guidelines on how to reduce such never events.

These recommendations include ensuring all medical equipment is accounted for at the end of every procedure, however, this can be challenging considering up to 100 sponges may be used in a single major operation.

Errors also often occur in stressful situations, when changes to the operation procedure happen suddenly or if there are a lot of distractions.

Dr Ana McKee, executive vice president and chief medical officer of the Joint Commission, told CNN: ‘If there’s music going on or side conversations or someone is on the phone, that does not meet the spirit of the Universal Protocol.’

Many hospitals in the US have switched to sponges and surgical tools with barcodes on them so they can be electronically tracked.