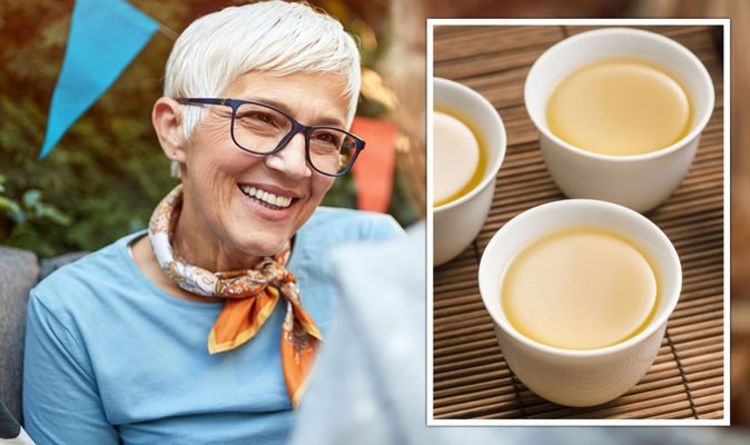 Dementia: Dr Sara on benefits of being in nature

Alarming figures released earlier this year showed that dementia killed more women than coronavirus in 2020, with experts saying the data highlighted the need for global efforts to tackle the disease. It is becoming increasingly apparent that lifestyle factors, including diet, are pivotal in the prevention of dementia. One warm drink, which is widely consumed in the UK, has been shown to slash the risk of the condition by 50 percent.

In one study, published in the Journal of Nutrition, Health and Ageing, researchers showed that drinking tea was linked to a lower risk of dementia.

What’s more, this association was more pronounced among patients with a predisposition to the neurodegenerative disease.

To establish this link, researchers followed 957 adults who has partaken in the Singapore Longitudinal Ageing Study.

Of these patients, 69 percent reported drinking tea on a regular basis.

After a follow-up period of five years, researchers found that tea drinkers had a 50 percent lower risk of dementia.

Furthermore, the team explained that the results were consistent regardless of the type of tea consumed.

The researchers hypothesised the protective effects of tea drinking stem from the flavonoids found in tea leaves.

These compounds have strong anti-inflammatory and antioxidant potential, which regulate neurotransmitter and brain activity.

The findings are consistent with a study published by the American Journal of Clinical Nutrition in April 2020.

On this occasion, researchers showed that plants that are loaded with naturally occurring flavonoids could cut the risk of dementia by up to 40 percent.

For this study, researchers evaluated the medical records of 2,800 dementia-free individuals, who had an average age of 59.

Over the 20-year follow-up period, researchers found that those who reported the higher flavonoid intake were around 40 percent less likely to develop dementia, compared with people who’d reported the lowest intakes.

Harvard Health explains: “There are many different types of flavonoids; those with the greatest link to lower dementia risk come from tea, apples, pears, blueberries and strawberries.

“A high intake was about the same as having 7.5 cups of berries, eight apples or pears, and 19 cups of tea per month.

“A low intake was the same as having no berries or tea and less than two apples per month.”

The study was observational and was therefore unable to prove that the intake of such foods protected people from developing dementia.

Flavonoids are a group of metabolites that counteract oxidative stress in the body through signalling pathways and antioxidant effects.

Almost all fruits and vegetables contain flavonoids, but as a rule of thumb, the more vibrant the colour of the fruit, the richer it will be in the metabolite.

Aside from having a litany of antioxidant qualities, flavonoids also have anti-viral, anti-cancerous, anti-inflammatory and anti-allergy properties.