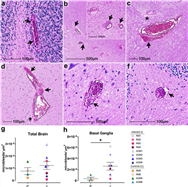 Many patients with COVID-19 report neurological symptoms. Severe COVID-19 can affect the brain and manifest as stroke, meningoencephalitis, and hemorrhagic necrotizing encephalopathies. Mild symptoms like dizziness or headache can be a part of the neuropathology associated with the disease. However, the origin and development of COVID-19 affecting the nervous system are unclear.

Two AGMs had to be euthanized because they manifested severe symptoms. Brain inflammation was observed in all animals, but it was more significant in SARS-CoV-2 infected animals. 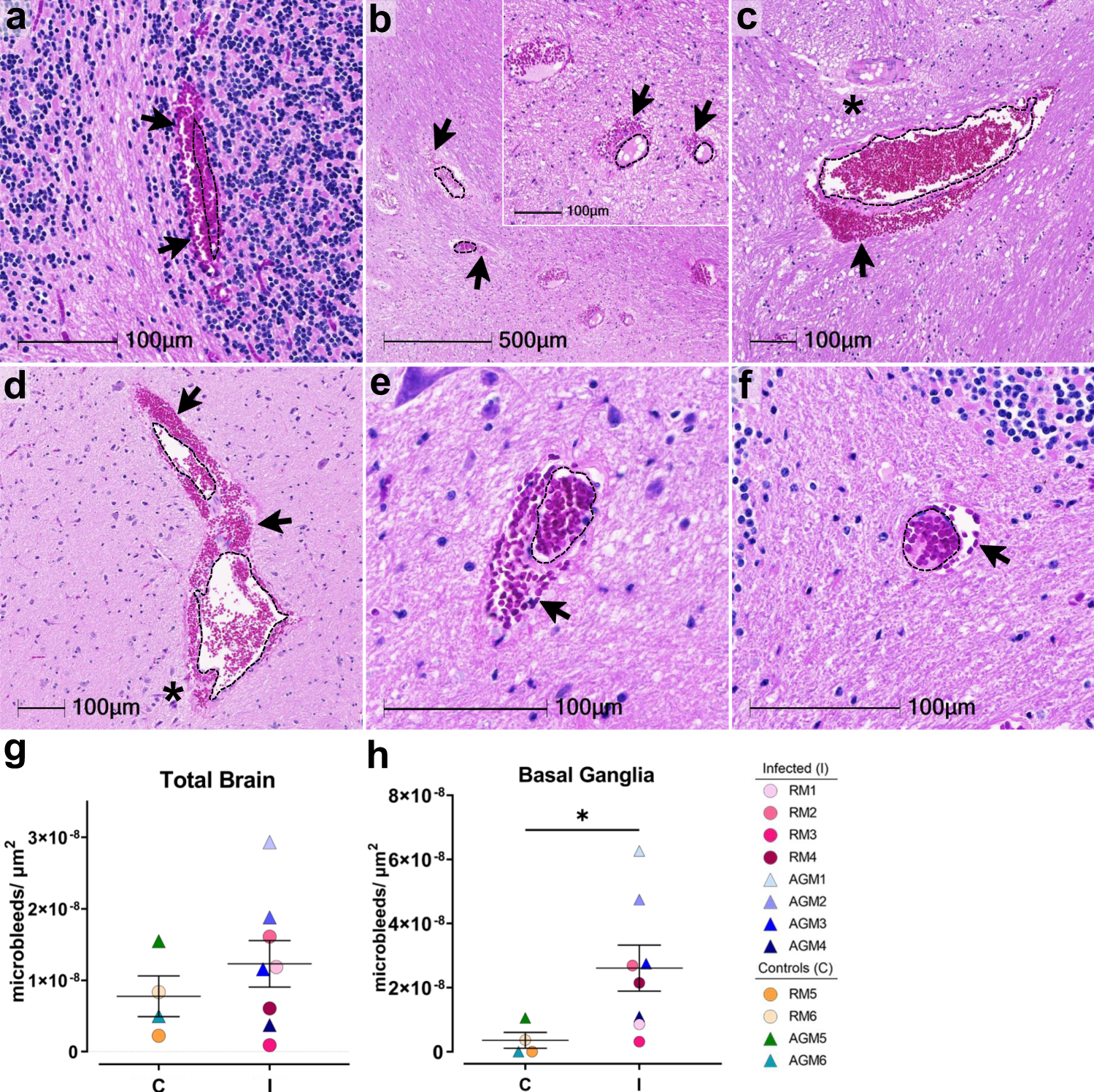 H&E examination of infected animals revealed microhemorrhages, as demonstrated in cerebellum (AGM1 a), brainstem (AGM2 b, AGM4 c), and basal ganglia (RM4 d), which tended to be larger and packed with red blood cells, as compared to non-infected controls, (RM6 brainstem e, AGM5 cerebellum f). Erythrocyte extravasation into the brain parenchyma is indicated by black arrows. Asterisks denote tissue injury around damaged blood vessels. A dotted line outlines the vessel lumen in each panel. H&E was performed and assessed twice on all brain regions. The number of microbleeds/mm2 was assessed in all brain regions (g) and found to be significantly greater in the basal ganglia (h, *p = 0.0263), where n = 4 biologically independent samples in the control group and n = 8 biologically independent samples in the infected group. Statistics were performed with a two-tailed Mann–Whitney U test. *p ≤ 0.05. Data are expressed as mean ± SEM. Source data are provided as a Source Data file. Abbreviations: C control, I infected, AGM African green monkey, RM Rhesus macaque. Scale bars = 100 µm except outset of b where scale bar = 500 µm.

One AGM that was euthanized did not show caspase 3 positive cells in the CNS. This suggests that apoptosis in the CNS may occur in the later stages of the disease.

Microhemorrhages occur with aging, possibly due to an age-related decline in elasticity of the blood vessels and an increase in blood pressure. These microbleeds can promote blood clotting that can stop the bleed but they can also cause a stroke. The presence of clots was examined by an accumulation of CD61. Multiple blood vessels were CD61 positive in all animals, irrespective of microbleeds. More clots were observed in infected animals. Thus, during SARS-CoV-2 infection leakage of blood vessels without injury occurs more frequently.

The brain has a high energy demand. It requires oxygen and glucose. A reduction in blood flow causes a decrease in oxygen and glucose that can affect neuronal vitality and cause neurotoxicity and inflammation.

One AGM that was euthanized had several microbleeds in the brain that may have been the reason for the animal's rapid decline. Possibly, the AGM's lung deterioration contributed to the microbleeds. This needs to be investigated further.

All infected animals had SpO2 levels between 89 and 99%. The SpO2 levels were mostly below 95% for most infected animals over the study course. These low blood oxygen levels (hypoxia) are not alarming, but they reflect impaired gas exchange in the lungs. Minor declines in oxygen levels may promote neuronal injury. Cells that are vulnerable to hypoxia and nearby cells were degenerate or undergoing apoptosis. Hypoxia was assessed by staining the oxygen-regulated alpha subunit of hypoxia-inducible factor-1 (HIF-1a). The regions of the brain that showed the most significant injury were assessed for hypoxia. Compared to mock-infected controls, the brains of infected animals showed higher HIF-1a levels.

The brain pathology that is observed in this study could be due to SARS-CoV-2 infecting the brain cells or an indirect consequence of the disease.

The presence of the virus in the brain samples was assessed by staining for the viral nucleocapsid protein or in situ hybridization. Staining showed rare SARS-CoV-2 infection in the brain, which appeared to be restricted to the blood vessels. In situ hybridization also showed viral presence in the brains of infected animals. Viral infection was observed in the brain-associated endothelial cells in deep brain structures. Viral presence was observed even in the absence of severe disease or obvious neurological symptoms.

NHPs can act as a viable model for addressing SARS-CoV-2-associated neuropathology. Conclusions drawn from this model can be translated to human disease.

Neuroinflammation, microhemorrhages, brain hypoxia, neuronal degeneration, and apoptosis are observed in SARS-CoV-2 infected NHPs. Notably, neuropathology is observed in infected animals that do not manifest severe respiratory symptoms. In addition, rare viral presence is detected in brain endothelial cells, but it does not correlate with the severity of brain injury.

Dr. Shital Sarah Ahaley is a medical writer. She completed her Bachelor's and Master's degree in Microbiology at the University of Pune. She then completed her Ph.D. at the Indian Institute of Science, Bengaluru where she studied muscle development and muscle diseases. After her Ph.D., she worked at the Indian Institute of Science, Education, and Research, Pune as a post-doctoral fellow. She then acquired and executed an independent grant from the DBT-Wellcome Trust India Alliance as an Early Career Fellow. Her work focused on RNA binding proteins and Hedgehog signaling.